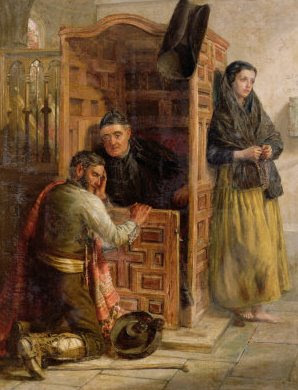 Women are prouder than men, but men are more lustful, according to a Vatican report which states that the two sexes sin differently.

A Catholic survey found that the most common sin for women was pride, while for men, the urge for food was only surpassed by the urge for sex.

The report was based on a study of confessions carried out by Fr Roberto Busa, a 95-year-old Jesuit scholar. The Pope's personal theologian backed up the report in the Vatican newspaper.

"Men and women sin in different ways," Msgr Wojciech Giertych, theologian to the papal household, wrote in L'Osservatore Romano. "When you look at vices from the point of view of the difficulties they create you find that men experiment in a different way from women."

Msgr Giertych said the most difficult sin for men to face was lust, followed by gluttony, sloth, anger, pride, envy and greed. For women, the most dangerous sins were pride, envy, anger, lust, and sloth, he added. For more click here.

According to the BBC, a recent survey of Catholics found nearly a third no longer considered confession necessary, while one in 10 considered the process an obstacle to their dialogue with God.

Conversely, therefore that means that two thirds of Catholics do still consider Confession necessary, while 9 in 10 consider mortal sin to be an obstacle to their relationship with God.