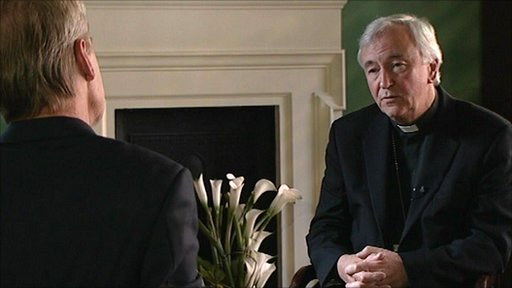 I thought it was worthwhile revisiting this now infamous interview with BBC's HARDtalk in the light of the survey on how Humanae Vitae has been received by the laity, since Bishops decided to stop teaching it in 1968.


S. And yet you and the Pope are sticking to a deeply traditional, small "conservative" line. Therefore the disconnect between the general population and the Roman Catholic church appears to be getting wider. Does that not worry you?

S. There'll be nobody in the pews.

S. And let me first just quote [to] you, sorry to interupt but it is important, the Pope in his letter to Irish Catholics in which he expressed great remorse for what happened in Ireland going back to the child sex abuse scandals. He said and I'm quoting his words now: "Fast-paced social change has occurred often affecting peoples' traditional adherence to Catholic teaching and values." The Pope himself surely recognises there is a problem here and is the Chruch not going to have to respond to it?

N. Well let me quote the Pope back to you in 1986, I think it was, as a theologian he said he could foresee the day when the church in some parts of the world had shrunk so much that it would become a small flock.

S. He used the word "remnant".

N. Yes he probably did. That's a very biblical expression. So he's not ... afraid of that. He would put fidelity over success so the criteria we're here for is not success.

S. You say he's not afraid of becoming "a remnant" he would put orthodoxy, loyalty, purity.

S. OK so maybe purity of theology before ...

S. The Church of England for example in this country is taking a rather different view. They believe there has to be some flexibility. The church has to be a reflection of society's values to a certain extent and therefore we see women priests, women vicars, and there's obviously in some parts of the Anglican Communion, women bishops.

S. Some of their vicars are also prepared to sanction gay unions. That church is showing flexibility. Is the Catholic church not going to have to do the same eventually?

N. I don't know. Who knows what's down the road?

S. Well I'm just asking you. You're rather an important player in the Catholic church. What do you believe it should be?

N. No no. There's no doubt in my mind that our first call is to faithfulness and not to success. And if faithfulness involves that kind of shrinking then so be it. But it's not as if the church has policies and then focus groups, then tries to re-shape so that it captures the mood of the day or the wind and therefore gets momentum behind it. That's not simply the way the Catholic Church understands itself.


And then, suddenly, from out of nowhere, comes the survey. Of course, the whole Church is praying that this survey isn't used for purposes that in any sense water down the holy Teachings of Our Lord, but it just goes to show how wise was Archbishop Vincent Nichols, despite widespread misunderstanding of his words in that interview, because, as His Grace indicated, you just never can tell what is down the road...Ah, how prudent is this Shepherd, how wise!
at November 17, 2013

i don't know!!is that that the best we can get from our leader in this country? archbishop nichols knows that sodomy and the rest of the mortal sins(do i have to spell them out?)are sins which will send a soul to hell.god help us in this country .pray ,pray ,pray-and they question the sspx!!god bless philip johnson.

In all fairness, with the sole exception of the "Who knows what's down the road?" reply, I can't see anything wrong with the archbishop's comments. I am minded to wonder if he has been badly edited. Or indeed whether this was in fact a bit of "foot in mouth" the like of which many of us are prone to suffer at times of stress. Perhaps it is possible to pick holes in it but there is some good stuff there.IMHO

Archbishop Nichols is a good leader. We need bishops who think before they speak and don't shoot from the hip like those American ideologues.

Interesting that Nichols was absolutely right when he said 'who know's what's down the road?' Who could have foreseen that the Holy Spirit would have sent us Pope Francis so swiftly.

If I may, I can see a lot wrong with the archbishops comments. True he did not say anything in contradiction to the Church's teachings but, equally, he said litte to support them, and appears to be sitting somewhat on the fence.

I mean " who knows what is down the road" is hardly the comment of an inspired and confident leader, and isn't going to rally the troops, is it?

Jacobi,
Thanks for your response. You refer to two aspects of a bishop's job, the missionary- "teach all nations" and confirming the brethren, or, as you put it, "rally the troops". In the circumstances, I believe the archbishop was doing the former. In short, he was addressing a secular culture. To get a flavour of what I mean may I suggest that you visit the following piece by Fr Stephen Wanghttp://jerichotree.com/2013/11/18/communicating-faith-secular-world-us/
When appropriate, as he has shown, Archbishop Nicholls can, and does, shoot from the hip:
http://portacaeli.blogspot.co.uk/2013/07/true-successor-of-st-thomas-becket.html
Sadly, not a lot of people seemed to be listening.