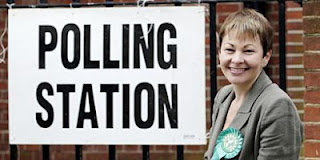 Well, I am glad to be able to report to readers that I will be meeting with Caroline Lucas MP to discuss with her the forthcoming same-sex marriage proposals to which the Green Party have so whole-heartedly signed up. I and a small contingent of people will be meeting Caroline Lucas on 19th October. If you are in Brighton and you are one of her constiuents then drop me a line and I'll give you the time of the appointment.

Will you be so kind as to keep the intention of this meeting in your prayers? Also, pray for me because I voted for her. Gulp!
Let's face it, readers, Caroline Lucas is so ideologically singing from the same hymn sheet as Stonewall that she could get away with being included in a local LGBT choir. It will be sure to be an interesting meeting. I would hope that I may be able to attract one or two people to the meeting who are not Catholics but who disagree with the proposals and am hoping to also attract others who have a same-sex attraction but who also disagree with the proposals.
It is important that Caroline Lucas at least has first hand experience of dealing with constituents who want to make their voice heard on this subject and that the majority of people who disagree with same sex marriage do not come at this subject from an angle of 'bigotry' or narrow-mindedness, but believe, quite simply, that marriage is something that takes place between one man and one woman.
at September 30, 2012

I'll be praying for you on the day.

Is it a public meeting open to all?

Great initiative. I hope and pray she will be enlightened. God bless.

No, its a not a public meeting but a private meeting in her surgery for which I would like to gather people who disagree with the proposal to come along.

We have to engage with these people so good on you for arranging this meeting. You never know you might get her thinking; she seems like a very difficult nut to crack to me but who knows.

I believe Greens should be culled like badgers as they are a menace to the countryside.

Sorry, I might have strayed onto the wrong blog.