It would have made for a 'beautiful gesture'... 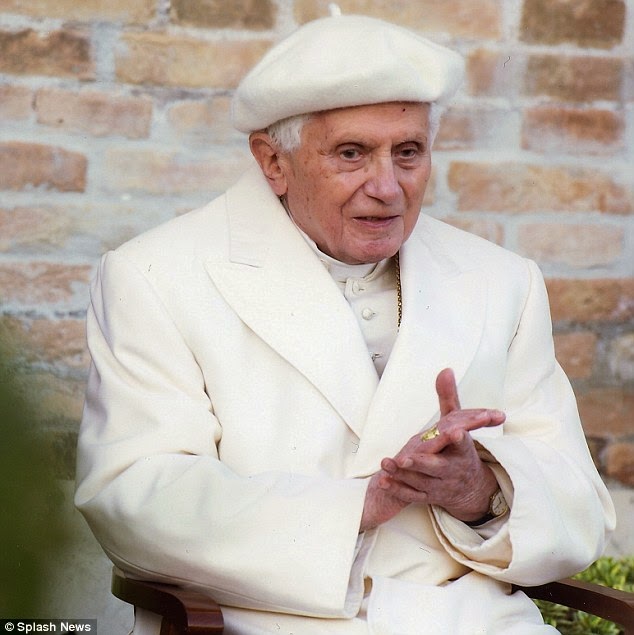 He was probably not expecting an invite to the Synod. It would have made for a beautiful gesture from Pope Francis, because we know that Francis appreciates Benedict's 'wisdom'.

His would have been a very interesting voice to hear at the Synod, not that we are honoured enough by the organisers to actually hear the views presented therein.

An opportunity missed perhaps for Francis to show the continuity that exists between him and his predecessor now that the carnival is over and the Vatican State circus has begun. Then again, if one of the chief protagonists in this Synod is someone who does not want the views of those representing an then entire continent, why would the views of a great Church theologian and former Supreme Pontiff be considered helpful?

Apparently our beloved Benedict is on retreat. Probably praying, fasting and doing penance for the sins of the Synod fathers. How I miss him!

What suffering must Pope Benedict be undergoing at the explicit evil emanating from the Holy See and this Synod it convened? Lord, give us fortitude and perseverence in this time of terrible tribulation. Let us never desert Thee and Thy Holy Faith.

Would you really want that good man associated with the current moral and theological shambles?

“I would like to try, with all necessary caution, to formulate a concrete proposal that seems to me to lie within this scope. Where a first marriage broke up a long time ago and in a mutually irreparable way, and where, conversely, a marriage consequently entered into has proven itself over a longer period as a moral reality and has been filled with the spirit of the faith, especially in the education of the children (so that the destruction of this second marriage would destroy a moral greatness and cause moral harm), the possibility should be granted, in a non-judicial way, based on the testimony of the pastor and church members, for the admission to Communion of those in live in such a second marriage. Such an arrangement seems to me to be for two reasons in accord with the tradition.”

Who wrote it?
Ratzinger in 1972! Very helpful, indeed.

The German section of "We are Church" also quotes from Ratzinger´s above mentioned article on their website "Communion for remarried divorcees":
http://www.wir-sind-kirche.de/?id=629

Interesting quote, Martina. I confess that I am surprised by it. Of course, the sedevacantists would say 'I told you so! Benedict is a modernist, too!'

I can't help but think of St. Paul opposing Peter to his face for being a hypocrite about the Gentiles. (Gal 2:11-14). He did not think collegiality was above the Gospel truth. Would that Pope Benedict would come forward with a bold statement confirming the eternal Truths given to us by God!

After I posed my 'If only Pope Benedict would speak' comment, then I found comments from his private secretary which is almost the same I suppose.

This interview was published last week. Here is a short excerpt:
"The Church doesn't close Her eyes to the difficulties of the Faithful who live in delicate and thorny situations," Ganswein added. "Nevertheless, the Church must offer sincere answers which directs, not towards the spirit of the times, but to the Gospel, to the word of Jesus Christ, who is the Son of God.

"The evangelical message takes much effort but it is worthwhile to live it," he said. "God welcomes, forgives, this is true, but it is also true He asks for conversion."

I suspect that attending this Synod would make him very ill.

Laurence, you want to send our beloved Pope Benedict to a premature grave?
That Bruno Forte gives an expertly lethal papercut, so I hear.