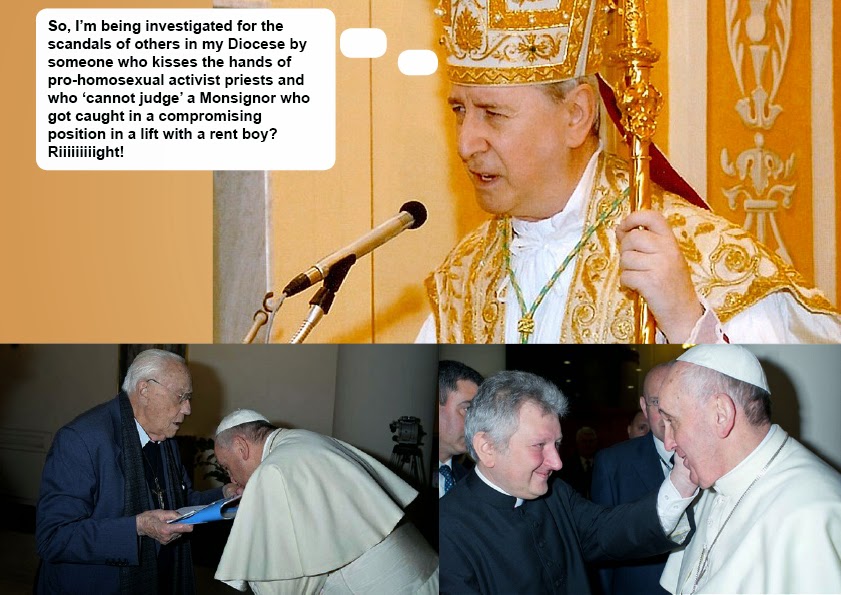 Read the report at Rorate. It's all so simple, isn't it? I mean, 'a change at the top' always leads to the amendment of the ways of those over whom he is given authority in a Diocese. Before Pope Francis tries to tackle scandal in another Italian Diocese, you might think he would want to tackle scandal in his own Diocese, or maybe even his own living quarters.

Is it possible that there is an 'ideological' agenda driving who Pope Francis targets for 'special measures' and the visit of a 'Commissioner', that might just have something to do with the Latin Mass and Catholic tradition?

Are we really to believe that if a 'Francis-agenda friendly' Bishop is appointed to this Diocese, suddenly all seminarians and clergy will start behaving and the 'gossip' (which Pope Francis cannot abide as we know) concerning the Diocese will stop?
at October 24, 2014

Judging from the photo and the description of this bishop over at rorate this is a clear case of a "restaurationist" which is a dangerous ideology that is forbidden in the New Church of the Bishop of Rome.

Full unadulterated Catholicism is outlawed and must be destroyed if it gets to a certain size, attracting converts and vocations, in a diocese, parish, order, monastery, seminary, etc. It's all-out war.

Thank you for defending the Faith.

Can we point out here that A Call to Action have posted on their website a message of welcome to Liverpool from Archbishop Malcolm McMahon.

The diabolical disorientation deepens its hold.

In Christ
Alan and Angeline

We've just realized that we could have worded our last comment better as it might give the impression that ACTA had welcomed Archbishop McMahon to Liverpool.

The point we wanted to express was that Archbishop McMahon has welcomed ACTA to Liverpool for their annual conference.

This is another serious and worrying development for the Church in our country. The events surrounding the Synod have encouraged ACTA and they are being increasingly welcomed by the hierarchy.