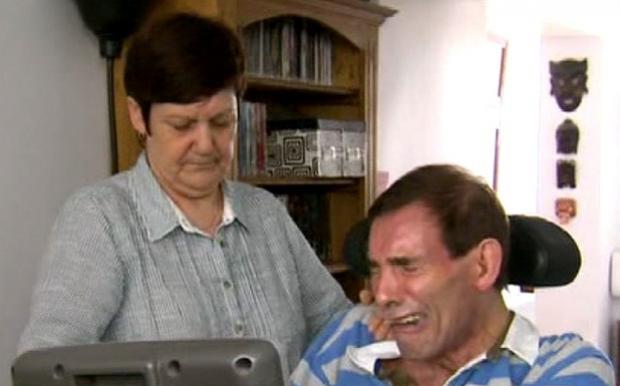 We must have every sympathy for the distress and suffering of Tony Nicklinson but I have to say that the verdict of Lord Justice Toulson is right. The most important thing he says is that the consequences of granting Mr Nicklinson's desire to be euthanised by a GP goes 'far beyond' Mr Nicklinson. Despite the fact that Mr Nicklinson's request has been refused, this campaign already is having consequences far beyond Mr Nicklinson, since it gives groups like Dignity in Dying more media coverage. Already, that group, well known for its eugenic links and beliefs are taking advantage of the sad scenes of Mr Nicklinson's response to the judge's decision.

Mr Nicklinson's long suffering wife also maintains, 'Why should we have to go to Switzerland?' because its 'too expensive'. Yet, while I believe that going to Dignitas would be a terrible and morally wrong thing to do, if they are so determined, why are they not just fundraising to raise the money to do this? After all, if the couple had their desires granted, the British taxpayer would be paying the Government to become the killers of its own citizens. The laws that we have in place are there to protect the vulnerable. Voluntary euthanasia is how Nazi Germany began. What then emerged was a killing machine.

Care Not Killing rightly suggest that this latest decision should 'draw a line' under this campaign in general. It won't, of course, because the plight of various long-term sufferers of harrowing conditions and disabilities will continue to be presented to the public, in the media and especially by the powerful Dignity in Dying lobbying group who will keep knocking at the door until Dr Death opens up and let's Hitler in.
at August 17, 2012

Mrs. Diane Pretty went through the courts for years trying to get the law relaxed so her husband could kill her. She died, not in Switzerland as one might have expected, but in a hospice.
What is really immoral is the manipulation and parading through the courts of desperately sick people one after another in order to further its campaign for kiling by the assisted suicide squad. They know that judges won't change the law but they hope to whittle away at it by the tool of public opinion.
When each court ordeal causes the inevitable public breakdown of these vulnerable people the media is inundated by the predictably emotional comments, typically: "You wouldn't let a dog suffer like that. Change the law."
Forgetting that hard cases make bad law.

Sorry to keep trolling but can I just quickly explain about the Englush language (opening a dictionary is evidently a chore). Eugenics and euthanasia are not the same thing! Unless this MS crippled man has a genetically transmissible condition and the request to assist in his dying is explicitly motivated by a wish to prevent his having children (thus passing it on) it is NOT eugenics. Open a flipping dictionary before slinging around big words or you end up looming thick

And it's 'Hitler Inn'. And Hitler never euthanised those who wereborn healthy but developed degenerative conditions (he suffered from Parkinson's and was quite clear on the differences between eugenics and euthenasia)

Are you now defending Hitler?

No! I'm just saying that if you're going to play the tedious old nazi card then at least use the terms properly. Euthanasia, the desire to end one's life comfortably, has nothing to do with eugenics. A lot of the eugenics society were also vegetarians, it doesn't follow that we should label this a case of 'creeping vegetarianism'. The point is you have to lie (using misleading terms) because there isn't a particularly strong argument otherwise

My argument is pretty simple yes.

There are forces at work in government and society who have strong ties to the modern day eugenics movement.

This movement has not changed in substance since those of the 1930s and 40s. All that has changed is their methods.

By stealth, these people wish to kill off the terminally sick, poor, mentally ill, etc. They see people in terms of genetic worth.

We can sum these people up as 'Nazis' because their beliefs and the outcomes they desire to be achieved are the same.

Historically accurate, too, is my assertion that it was Hitler who brought in Voluntary Euthanasia in Nazi Germany in the 1930s. It is historically accurate to say that the same country degenerated into a murderous regime relatively quickly.

But don't be surprised if once the State has the right to kill people who lay their necks on the line, the State decides to change the gameplan and kill people off who don't want it.

Don't belittle my argument because you don't like it. Voluntary euthanasia was a Nazi policy. They were the first country to adopt it in Europe as a deliberate policy. Therefore, we can, without reproach, call the people who support this law Nazis.

Actually, calling them Nazis makes little sense. The Nazis also supported the forcible killing of people, including those who were in no position to agree, such as the mentally challenged. Furthermore, Nazism included a whole set of policies unrelated to euthanasia, ranging from official anti-semitism, expansionist nationalism, and so forth. Screaming Nazi just shows you have only vague, sensationalistic idea of who the Nazis were.