Thanks to my friend Lawrence who played harmonica on this song and to the Blessed Virgin and the Saints who inspired me. If you like it then Gloria Patri et Filio et Spiritui Sancto, sicut erat in principio et in saecula saeculorum. Amen. If you don't then, sorry. I chose a car park for recording because the acoustics are good and we are the Catholic underground.
Tabula Delenda Est
Well I walked into the Mother Church of England and Wales
To light a candle, say some prayers and confess
Took a stroll around and found a magazine
Enigmatically titled, ‘The Tablet’
So I read a couple of the articles and the more that I read,
The more it dawned on me this mag once had Catholic zeal
Now its a vehicle for dissent
So I said:
‘Tabula Delenda est!’
Now I know why so few Catholics genuflect
They're so comatosed by this infernal, liberal journal
They don’t believe in the Real Presence
‘Tabula delenda est’
The barely beating heart of the Catholic Establishment
Surely its days are numbered
If their faith is so encumbered by liberalism’s foul-smelling stench
Domine exaudi orationem meam
Et clamor meus ad te veniat
When will the axe fall upon this moribund magazine
And its liberal editrix?
No subject is taboo, no line can be drawn
Nothing's sacred, no Teaching unchallenged
And if you dare to tell them they’re writing into oblivion
They’ll say you’re a fundamentalist
Tabula delenda est!
The intelligensia ain't that intelligent
Because they’re losing readers by the weeks, months, years
And its obvious they’re best years are spent
Tabula delenda est!
And we wonder where all of the Catholics went
They either lapsed or died of boredom readin' this nauseatin'
Excuse for the Catholic press!
An insult to the energy Cardinal Vaughan spent
On a Catholic journal called The Tablet
That would explain Catholicism rather than end up in schism
That would be loyal to Christ to the end
Now we get articles by Bobby Mickens wishing that our
Beloved Pope was dead
But who'll be Bobby’s successor?
And who's a rank outsider?
Have a word with Archbishop Vincent
Living proof for the Doctrine of Original Sin
But at least in Adam and Eve’s defence
Although they picked from the Tree of the Knowledge of Good and Evil
At least they knew the difference
More than we can say for…
Tabula delenda est!
The barely beating heart of the Catholic Establishment
When will the Archbishop of Westminster tell Catherine Pepinster
She's non dignus of her monthly pay cheque
Tabula delenda est!
What kind of Catholic does this weekly represent?
Not the ones who adhere to the Magisterium
You'll find them all on the internet
Tabula delenda est!
Are you wondering where all of the Catholics went?
Their faith collapsed, possibly, when they swallowed the Suppository
Implausibly, bitter Tablet


Tabula delenda est!
Why not consider reading the Herald instead?
The Pill's dwindling readership's still cryin’ over Humanae Vitae
So they read The Tablet

Tabula delenda est!
Let's burn copies of The Tablet 'til there's no Tablets left
And then return to the Church to adore Our Blessed Lord
In the Most Holy Sacrament 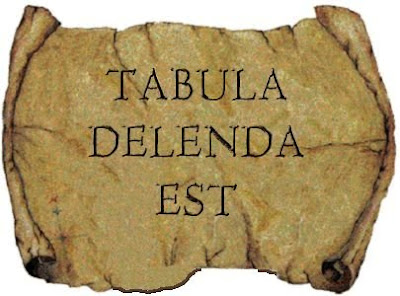 Brilliant! What's the tune - I want to sing it!

Well I thought it was fantastic!
Good one Laurence.

Great, Laurence! - but to reach a much wider audience I think you should collaborate with someone like emceemiko it needs a touch of rap, flashy lights and arty clips imho:)

@epsilon: what Laurence needs is some harmonies, some organum and somebody tapping out a beat on the side of his guitar - that would be cool...

In my head is a really irritating sax solo, Paul.

Traditionalists should get their Latin right: a feminine person is digna, not dignus. How odd that you should expend so much venom on a paper that you claim is so wrong. Methinks you do protest too much - perhaps in your insecurity needing to convince yourself you are right? Vivat Tabula - the one voice of sanity in the Catholic mad-house!