Solemn High Mass at Our Lady of Consolation & St Francis 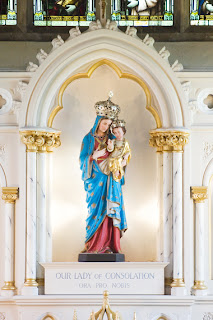 Today I drove Fr Ray Blake over to Our Lady of Consolation & St Francis in West Grinstead, for a very beautiful Solemn High Mass. Fr Matthew Goddard, recently ordained said Mass in the Extraordinary Form in a packed parish, with Fr Sean Finnegan as Deacon and Fr Seamus [forget the surname!] as Sub-Deacon. It is a Church etched into Catholic English History as a hiding place for priests and religious who arrived in Shoreham, during the Reformation under Henry VIII, when Catholicism went underground. How very apt it is that this should be a parish where the Latin Mass is being embraced so ardently, a place where Tyburn martyrs spent possibly some of their last days of freedom. It is also a shrine and site of pilgrimage.

I received a blessing from Fr Matthew, which I was told has some purgatorial escape potential for a grateful soul, which was given in Latin. I was even given the privilege of jumping the queue because of an urgent transportational need, and met, briefly the architect who hopes to restore St Mary Magdalen's to former glory! 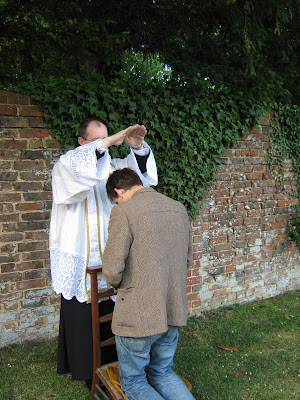 Should I ever become a wealthy person by some Miracle of God, then I hope to be able to help out on that front. Anyway, I digress...

Hopefully I shall learn more about the Goddard family soon enough. It's the stuff of Catholic legend! It appears that they are quite a remarkable family! Fr David Goddard, Fr Matthew's father, was an Anglican minister. Fr Matthew converted to Catholicism at the age of 15 and his explanation of his conversion to the Faith and his love and faith in Christ and Holy Mother Church won over not just his father, but the entire family to the Catholic Faith! What is more, they are all in love with the Latin Mass and firmly rooted in Holy Tradition. How remarkable and splendid! 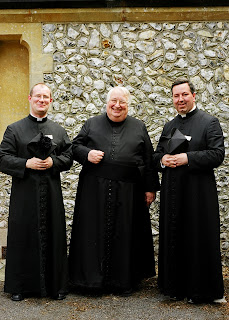 This is them...or at the very least two of them, Fr Matthew on the far left, Fr David in the middle.

The Mass liturgy was breathtaking and Our Lady of Consolation hired a choir who sang both chant and polyphony. The music was so rich and prayerful. The Mass was in honour of Our Lady. I think I saw someone film it. If so I will post a video link if or when it becomes available. I must say there is something very special going on in Sussex, with the Latin Mass and liturgical renewal. Hopefully, it will spread like that some fast-spreading herbacious perennial all across the country at a rate of knots. We can but pray that the Benedictine project, the liturgical renewal of Holy Mother Church and the embracing of Holy Tradition will become a nationwide, or perhaps worldwide movement as popular as say, the hippy movement of the 1960s.

Whether you're a traddie or not, you have to admit that is a sweet song! Hopefully the new 'people in motion' affecting a 'whole generation' will have Christ coursing through their veins, rather than a truck load of hallucinogenic drugs...
at June 21, 2009

You couldn't meet a nicer family. God Bless the Goddards for all their services to the church.