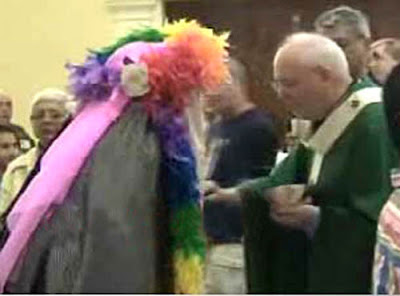 In 2007, the Most Holy Redeemer Catholic Church hit the national US Catholic press, when footage was recorded of the Archbishop of San Francisco, George Niederauer, a protege of Benedict XVI, giving Holy Communion to gay activists dressed in garb called, 'Sisters of Perpetual Indulgence'. The event sparked outrage among orthodox Catholics, as it appeared that the priest in charge had deliberately committed sacrilege in preserving the Church's standing among the gay community. Now, the same Church has vocalised its support for Proposition 8, which rejects same-sex marriage in the US, the LGBT community has turned viciously on the Church.
Courtesy of Catholic Online

Most Holy Redeemer Catholic Church, in the heart of San Francisco’s gay Castro community, was vandalized over the weekend by opponents of Proposition 8, the California resolution passed by voters in November that rejected gay marriage. Swastikas were painted on the church and the names Ratzinger (referring to Pope Benedict XVI) and Niederauer (the San Francisco Archbishop) were scrawled besides the Nazi symbol.

Catholic League president Bill Donohue is asking Catholics nationwide to respond to this incident:
“In the wake of Proposition 8, innocent persons have been assaulted, churches have been vandalized, a white substance resembling anthrax was sent to the Knights of Columbus and to Mormon temples, supporters of traditional marriage have been branded Nazis, African Americans have been called the ‘N-word,’ houses and cars have been trashed, etc. Unfortunately, most of those in the gay community have been silent about these acts.

“Part of the blame for the latest attack goes to San Francisco Mayor Gavin Newsom and the San Francisco Board of Supervisors. Both Newsom and the Board have shown nothing but contempt for the First Amendment rights of Catholics. When crucifixes are sold as sex toys and Catholic sensibilities are assaulted by naked men in the street at the annual Folsom Street Fair, they say nothing. When gay men dressed as nuns show up at Mass—at the same church—they say nothing. But the Board was quite vocal about condemning the Catholic Church in 2006, something which led to a lawsuit triggered by the Catholic League and the Thomas More Law Center.

“For those who love to write about ‘root causes,’ let them ponder the guilt of these public officials. Moreover, leaders in the gay community show no leadership when it comes to denouncing incivility committed in the name of gay rights. This has got to end.”

Contact Mayor Gavin Newsom and ask him to finally condemn gay assaults on Catholics and other people of faith: gavin.newsom@sfgov.org
at January 09, 2009

WHEREAS, Most Holy Redeemer Church, a Catholic community established in 1900 and located within the heart of San Francisco's Castro District, is widely known as a Gay-friendly parish; and

WHEREAS, For over 20 years the community of Most Holy Redeemer Church has sustained an active AIDS support group providing direct care to persons with HIV disease and assistance to those who love and care for them; and

WHEREAS, Most Holy Redeemer Church established a Peace and Social Justice Group to reflect upon and address issues of justice both inside and outside the church, particularly in response to sexism, homophobia, racism, and the willful failure to protect the poor and underserved; and

WHEREAS, The Community Life Committee of Most Holy Redeemer is made up of various organizations in the parish that form the faith and build a deeper sense of community for all ages and interest groups in the parish and the extended local community regardless of religious affiliation; therefore, now be it

RESOLVED, That the Board of Supervisors of the City and County of San Francisco does hereby condemn the recent intimidation of Most Holy Redeemer Church and its parishoners through acts of vandalism, specifically the defacing of its exterior with spray-painted graffiti that included the names of church leaders and the depictions of swastikas; and therefore, be

FURTHER RESOLVED, That the Board of Supervisors of the City and County of San Francisco commends the significant accomplishments and contributions made by the faith community of Most Holy Redeemer Church to the City of St. Francis