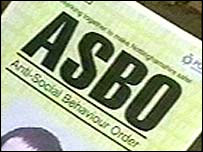 A lot has been said about Anti-Social Behaviour Orders in the UK, about their efficacy and their worth, whether they deter crime or not. From conversations with a friend, however, one is struck by how unchristian they are. They can be served for begging. Here is a little info from Wikipedia on ASBOs...

'An order must be tailor-made for the individual defendant. The ASBO represents "a form of personalised criminal law." It must be relevant to their particular anti-social behaviour. Orders must not be drafted too widely or imprecisely. Each prohibition must be necessary. An ASBO is very similar to a civil injunction even though the difference are important.

First, the injunction is supposed to protect the world at large, in a given geographical area, rather than an individual. Second, breach of an ASBO is a criminal offence to be tried in a criminal court applying the criminal standard of beyond all reasonable doubt. A power of committal to prison is available for breach of a civil injunction but a court is unlikely to exercise that power. A subject of an anti-social behaviour where it does not follow a criminal conviction has an automatic right of appeal against both the making of the order and its terms to a higher court. There is also the availability of an appeal to the High Court by way of "case stated".

An application for an ASBO is considered by the courts in its civil jurisdiction and is a civil order. However, breach of an ASBO is a criminal offence and conviction may result in up to five years' imprisonment (two for a minor). An ASBO may contain any prohibition even if the same is not an anti-social act, e.g. can include a prohibition in entering an area or speaking to named persons.'

However, it is true to say that while all this sounds, though draconian, in the interests of the good of society, how it works in practice is unjust for the individual concerned. An asbo can be served so that a citizen's movements can be limited to certain areas of a town, and banned from certain quarters, say for instance, the town centre. The notice served on my friend runs until 2012. That's 3 more years or more, of not getting into trouble, before his ASBO will be dropped. If he is found by the police in a certain area of town, say, looking for a friend or someone who he knows may need his assitance, he will be arrested. He told me himself, that he came out of prison once, walked out of the station, went to KFC to get a burger and then was arrested by the police for being in breach of his ASBO because he was on Western Road, from where he is banned. He had assumed the jail sentence had been his time, 'doing time', and that he left a free man.

The problem with an ASBO of this nature is that it limits human freedom outside of a real civil punishment, such as, say, prison. If the state wants to punish someone for a crime with due regard to the rule of law they should do so. I cannot be the only one who thinks that to limit somebody's freedom to roam outside of prison is a little bit stasi-esque.

"You cannot go here, if you go here you will go to jail. You can go here, here and here, but not there. You can't go to the seafront, Western Road, the Lanes, the North Laines, anywhere where friends may be. You are no longer free even though you are out of jail and it shall be thus until 2012. Between now and then, if you break the conditions of your ASBO you will go to jail for..."....wait for it...here it comes..."5 years".

5 years! Just for being in the wrong part of town, at the wrong time, and ultimately in the sight of God, being totally innocent! For God does not limit our human freedom! My personal take on it is this: If someone has done wrong give them a jail sentence, then leave it at that, they leave free. Don't leave a human being watching his back all the time to ensure he is safe to walk down the street, or keep him on the state's watch-list.

It is totally dehumanising, totally and utterly dehumanising, because the sentence of not being free to walk where he wants is until 2012, while the jail sentence has itself been served and if the ASBO were a replacement for the jail sentence, it is a totally disproportionate and exaggerated sentence in response to the crime, which as far as I can see was minor, like drunk and disorderly and begging a bit too aggressively. I hadn't realised just how draconian these orders were. Quite shocked I am, indeed!