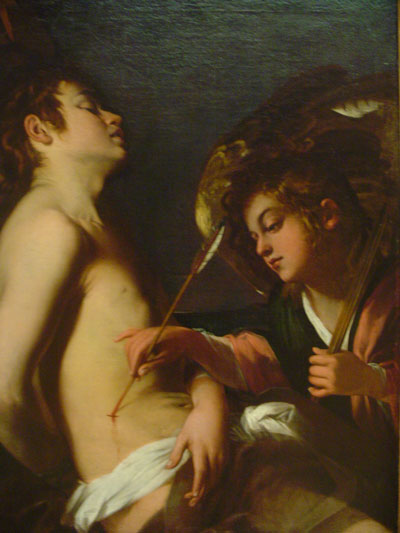 The picture above reminds me now of a young man who I saw today who was recently stabbed. Please pray he gets his wound seen to soon, lest it become infected.

According to his legend, Sebastian was born at Narbonne, Gaul. He became a soldier in the Roman army at Rome in about 283, and encouraged Marcellian and Marcus, under sentence of death, to remain firm in their faith. Sebastian made numerous converts: among them were the master of the rolls, Nicostratus, who was in charge of prisoners and his wife, Zoe, a deaf mute whom he cured; the jailer Claudius; Chromatius, Prefect of Rome, whom he cured of gout; and Chromatius' son, Tiburtius. Chromatius set the prisoners free, freed his slaves, and resigned as prefect.

Sebastian was named captain in the praetorian guards by Emperor Diocletian, as did Emperor Maximian when Diocletian went to the East. Neither knew that Sebastian was a Christian. When it was discovered during Maximian's persecution of the Christians that Sebastian was indeed a Christian, he was ordered executed. He was shot with arrows and left for dead, but when the widow of St. Castulus went to recover his body, she found he was still alive and nursed him back to health. Soon after, Sebastian intercepted the Emperor, denounced him for his cruelty to Christians, and was beaten to death on the Emperor's orders.

Saint Sebastian was venerated at Milan as early as the time of St. Ambrose and was buried on the Appian Way. He is patron of archers, athletes, and soldiers, and is appealed to for protection against plagues.
at January 20, 2009