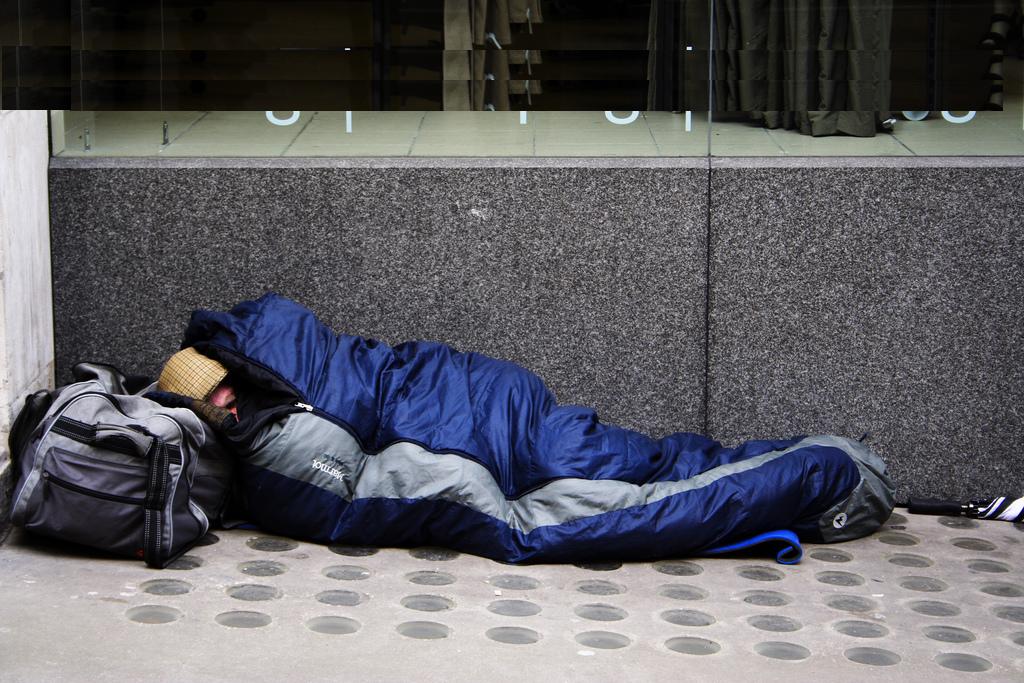 A couple of evenings ago, I went to a nearby cash point to get out some money, whereupon I was greeted by the sight of a man bedding down for the night outside the supermarket. His bedding was laid out in a most orderly manner.

It turns out that said man was a Bulgarian immigrant. I asked him how long he had been here, he replied, "one month". His English wasn't terribly good, as you can expect, but we managed to hold a brief conversation.

I doubt he was homeless in Bulgaria, but he maintained he was here, in Britain, 'looking for work'. Good luck to him. I asked him if he was a Christian, he said that he was. You could tell he wasn't your average Brighton homeless man because he was sober. I wished him happy Easter and went on my way. Welcome to the United Kingdom, where all your dreams come true. I didn't have the heart to tell him that according to official Government policy he only has two months left before being packed back to Bulgaria, but then I guess that what with having no address, he might not get the letter from David Cameron telling him to go home in the absence of employment or the letter that welcomed him to the UK.

Perhaps David Cameron is a Christian after all. He seems awfully keen on inviting orthodox Christians from Bulgaria and Romania here en mass, as well as Polish Catholics here en mass. Another 40 years of that and this country will be Christian once more.
at April 26, 2014

I hope he makes good. concrete sleeping and nothing to 'cushion' the cold is rough.
-
I wonder what the EU's endgame (at least in the minds of brusselites) is for Catholics. Possibly not that different from the vatican's.
-
is anyone else still waiting for a divine intervention re the canonisensations?

What does the Bulgarian's religion and being a Christian got to do with this issue and why he's homeless?

More Christians is good for this country, since its a very anti-christian country.

Why on earth do you spend your time being bothersome on the sites of faithful Catholics??

"Another 40 years of that and this country will be Christian once more."

Never thought about that! At the rate we are contracepting ourselvs out of existence, that could be the ideal solution?

Lynda - I asked a simple question because I was interested. By the way, I am also a faithful catholic.

I asked because I don't see the relevance of his religion to the problem of his homelessness. If he is in need, then we should help him because he is our brother - not because he is or isn't a Christian. If he was a muslim or aethiest, we would still have a gospel responsibility to help him.

Laurence - if you think this is an anti-Christian country then you should try living in a country where there is real persecution cf Cardinal Nichol's recent comments. I would not agree this is an anti-Christian country but I would say we are a post Christian society. I also find the implications to your assertion to be bordering on racism. This poor guy may not be a practicing Christian, and if he is, he may not even be catholic. You spend a lot of your time condemning such groups for not being authentic catholics aka 'heretics' etc.

You speak in political terms, like a materialist. You will not bring anyone to the true Faith in that way. Of course, the man's religion and spiritual welfare is "relevant" to a Catholic writer, who views the world through the true Faith, as should we all. It is the divorcing of the soul from the body of one's soul that is evil (and profoundly opposed to the Faith) and a mark of materialism, atheism. Your first concern, and our first concern, ought to be the salvation of souls. If one cares not for the eternal salvation of a soul, one does not love that soul. You seem to have lost the Faith.

If you really are a priest, which I hope not, you ought not to be harassing a faithful Catholic who is obedient to the Deposit of Faith. Your duty is the salvation of souls. You are not giving the example of a good Catholic, never mind a priest.

(I have been homeless in the past myself, with a young child, though thanks be to God, always found somewhere with a roof to stay, and a place to store our belongings) with the help of others. I am also in danger of losing my home now as I am unable to pay the mortgage.)

Please don't put words in my mouth in an attempt to misrepresent me Lynda. I have not mentioned politics or materialism, nor did those concepts even cross my mind. I am not the materialist or political type - quite the opposite in fact.

I did not say that his religion was irrelevant to his salvation... but that is was irrelevant to whether we helped his homelessness and hunger. If he is starving with no where to live or sleep then his first need is physical nourishment and shelter. To refuse to offer it and offer only spiritual concern is to offer him a scorpion instead of manna / bread (cf Pope Francis recent comments and the scriptures). What good is ''caring'' for his soul when he faces death from hunger or exposure to the harsh weather? It is you who are being dualist, separating the soul from the body in such a way. To care for his soul is to care for his practical problems. That is solid and traditional catholic teaching whether you accept it or not.

If anyone spoke in materialist or political terms it was Laurence the author who cynically suggested that this poor man's plight could be tolerated or even welcomed because christian immigrants might in some way be good for this country.

Your comments that this country is an anti-Christian one is your opinion not fact, and it is an opinion not shared by others like Cardinal Nichols.

Finally, I haven't harassed anyone, I simply asked a question on a public blog. Thankfully we have free speech in this country. We probably wouldn't in your idealistic conception of a totalitarian catholic state.

Lynda - When you and your children are homeless and starving, I won't offer you shelter or food but keep walking on by or maybe I'll just pray for your soul and your eternal salvation by giving you a prayer card like the pharisees. This is you're reasoning and it's not Christian, shame on you.

What dishonesty. Mr England is always concerned and helps those who are in need, particularly those in his town.

What wickedness! Both reason and Faith twisted and rejected. It is those who have such hate as this woman has for another soul, whose souls are in grave danger. Mr England, I don't think you should have published such an evil comment. The devil is more prominent and aggressive than ever. Fr Blake has also been sent a letter constituting an evil personal attack.

You are acting in a most disgraceful way, and bringing the holy priesthood into disrepute. Mr England is a helper to all, especially the homeless, a great example of the Faith in action. You are twisting everything he has said about an interaction with a Bulgarian man that he found sleeping outside in his town. Stop pretending not to understand - one does not need to use overt terms of materialism or politics to invoke them. If you can't support Mr England's good work, or the Deposit of Faith, you need to stop what you're doing.

And, any person of reason knows the UK is virulently anti-Christian. Not the faux, compromising with evil "Christianity" but true Christianity as comprised in the Deposit of Faith. The UK, in its laws and policies, supports the most egregious of intrinsic evils. Those who go along with this public evil and who do not stand up for the truth, for justice, for the Faith, are avoiding persecution (for now, in any case).

The comment by "Fr John" linking Catholicism to totalitarianism says it all. A "Catholic" state (and he was the only one who mentioned this idea) would, according to him be "totalitarian". Meanwhile, he refuses to acknowledge the profound evil and anti-Christian nature of a state that, inter alia, regulates the widespread murder of defenceless babies in utero, the killing of the old or disabled, confers official recognition and status on intrinsically evil sexual relations, supports IVF and implanting embryo humans in a woman to provide a child to others, including, most evilly, two persons of the same sex engaging in sexual relations, and pretending to be two fathers or mothers to the innocent, defenceless child (gross child cruelty and abuse). There are countless other examples, such as intrinsic evils being forced on children in schools, people with businesses being for forced to provide services that involve cooperation with intrinsic evil, persons in certain professions (e.g. medicine, pharmacy, education) being required to commit acts of objective evil. Of course, these laws are invalid for being in contravention of objective reason, truth and justice, of the Natural Law (Divine Law) and demand civil disobedience. There are many, many other examples. No true Christian could fail to acknowledge the profound evil, anti-truth, anti-justice, anti-Christian character of such a state. Collusion with or support of such intrinsic evils is a grave evil.

The false personal attacks against you are even more egregious and absurd in light of the exceptional help that you give to those in need, particularly those without a home, far beyond what most Catholics do, or could do. I, myself, did voluntary work for homeless persons for years. I am not in a position to do that anymore, but help individuals in any way I can. It is always those who attack those who do good for others, (helping people materially or spiritually, fighting to save the lives of innocents, etc.) that do the least for others. This is the experience of all those I know actively engaged in helping people, e.g. prolife work. Satan uses souls to attack those doing the Lord's work.