Question: What is Secular Humanism? 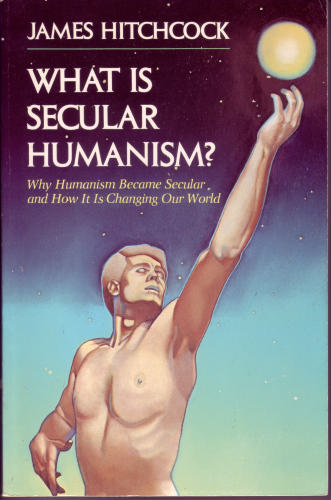 
Ever since the Holy Father made the statement on 'self-absorbed neo-promethean pelagianism', I've been thinking of those Enlightenment thinkers and their accursed legacy for the human race.

The book, 'What is Secular Humanism?' was written by a Catholic named James Hitchcock who argued that it constituted a great threat to both the Church and civil society. You can read an interesting essay by the author of that book here entitled 'The Secularization of the West'. Hitchcock contends that...

'The strain of modern Humanism which comes down through Feuerbach, Marx, and Nietzsche can be called Promethean Humanism, after the figure in Greek mythology who stole fire from the gods to give it to man. It is a Humanism which bases itself on rebellion and a denial of God. It would counter Voltaire, "If God exists, he must be destroyed." The older, somewhat gentler Humanism deriving from the Enlightenment is less passionate. It was content to say that there is no rational evidence for believing in God.'


Ironically, I have a feeling that the unapologetically Catholic and brazenly mystical Mass in the Extraordinary Form serves as a key weapon in the Church's ongoing fight against secular humanism, but, then again, there is something rather 'Promethean' in wanting to see the Mass used as a tool against such a trend. There must be a reason, however, why for so many centuries, the Mass of Ages has been under such sustained attack, often under clever disguises such as 'renewal' or 'reform' with what it turns out later was the real intent to destroy or knock down rather than to improve or develop something in continuity and harmony with what is passed down.

Like I say though, when I think of Prometheanism, I think of the illustrious list of fellows of the Royal Society and such. After all, you don't get anything much more Promethean than experimentations to further the possibility of human cloning and experiments on human embryos. There nothing much more Promethean than IVF and the like. In fact, you could argue quite soundly that the whole artificial contraception thing is rather Promethean, stealing or robbing from God that which is His to deny and give as gift.

I hope that one day His Holiness Pope Francis will speak against these terrible things and speak hard truths to big power, condemning them for the Promethean attitude which lurks behind them. IVF and human embryology are truly barbaric - straight out of the nightmare vision of Huxley's 'Brave New World'. The world is now in such a state of diabolically inspired confusion regarding the unborn child and the dignity of human life in general that Belgian has just extended the death penalty to born infants who 'voluntarily' desire to be sent back to their Creator. I know its one of the Low Countries, but that's a law so downright low that Belgium is now well and truly a veritable pit.

By rights, if this country had any Christian morality left, we would invade Belgium tomorrow, safe in the knowledge that the fight against Hitler never finished in 1945 but goes on and on, yet with 200,000 abortions a year and an NHS that kills off the infirm and elderly we've no moral leg on which to stand. Yet not a peep about this unspeakably repugnant law from our own Prime Minister or seemingly any parliamentary in the UK on the new law emanating from the country that gave us Brussels and, notably, the HQ of the European Union itself. Today, His Holiness visited sick children at the Paediatric Dispensary of Santa Marta in another sign of telling witness to the sanctity of life and his fatherhood to the neglected of this world, but when, please God, when, is someone going to invade Belgium or at least read them the riot act? I guess we can rule out the UN!
at December 14, 2013

Perhaps Francis will refer to this visit and link the preciousness of children with an outright condemnation of the Belgian decision as a sin that cries out to Heaven. Sometime.

agree that its significant that this is taking place in the country with EU HQ. The Pope will surely condemn this publicly.

p.s. what is secular humanism? anything that's not been the Church for 1900 years.

You mean "destructive human embryo experimentation", not "human embryology" which people could do with knowing more of. I think it was Dr Bernard Nathanson who said he had to stop killing babies when he studied embryology and thereby increased his knowledge of the very young person.

IIRC, it was Dostoevsky who said it best (even if he didn't mean it): Without God, all things are permissible. That is the essence of secular humanism.

Although, long before, I think Plato or Aristotle hinted at it by condemning the proposition that "man is the measure of all things." As St. Paul might quip "there is nothing new under the sun."