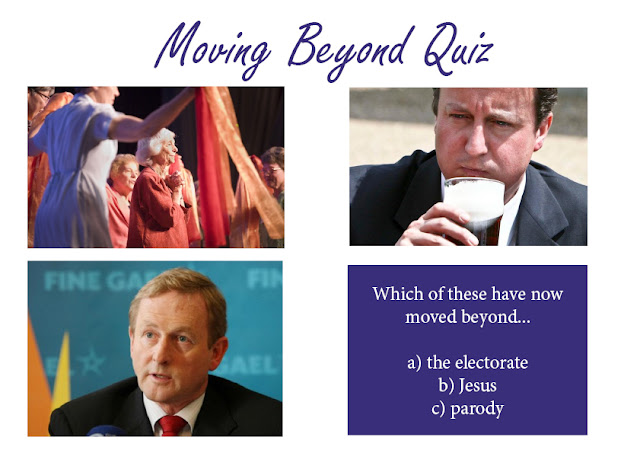 Incredibly, some bright spark at a Jesuit University has decided to give a Catholic politician in Ireland who has moved beyond Jesus only to find himself signing papers for the execution of babies an honorary degree. It is beyond parody. You literally couldn't make this up and unfortunately nobody has. It's 100% true, as true as abortion is the deliberate killing of the unborn child - a killing routinely ordered in the United Kingdom for reasons of sheer expediency.

David Cameron has moved beyond the electorate and into a nearby pub to order a pint. Unfortunately, David doesn't look happy because he has just realised that not only is his beer flat, but those who could be bothered to turn out to vote in the local elections turned out only for one reason and one reason only - to make plain their great dislike of him. If you think that beer tastes bad, console yourself, Mr Cameron, that it is not half as bitter or disappointing as your staggeringly catastrophic Premiership. Your 'modernisation' of the Conservative Party has ensured that there is only one party in Great Britain that is not, in truth, New Labour. That's why people want to vote UKIP, David. They're the only party that do not behave as the horrifying brainchild of Peter Mandelson. If I didn't know any better (which I don't), I would think that you are a secret socialist who has been sent to the Conservative Party to destroy it in the same way in which Tony Blair was a secret wet Tory sent to Labour to destroy it.