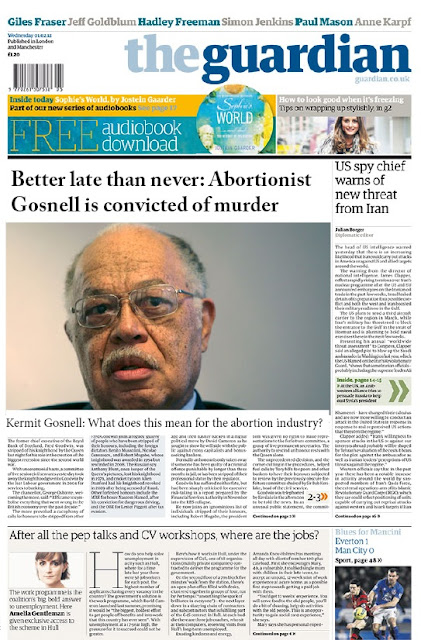 Well done to The Guardian for finally putting Kermit Gosnell where he belongs: as front page news.

If only...Whatever happened to the Manchester Guardian? Any thoughts, Polly Toynbee? Still, The Guardian are true to form and have done a hit-job on the Gosnell case, suggesting that Mr Gosnell is evidence that the murder case proves 'why safe abortions are needed'. It's very clever what The Guardian have done here, you see, because in a case about the killing of lots of children, they've turned it all around to make the Gosnell case about why we need abortionists and spent, oh, about a sentence or two recalling the deaths of the actual victims and their mothers.

Apparently, Gosnell was getting away with murder and he was able to do so because (you're going to love this...)

'Gosnell, taking full advantage of the free market, was able to make money in part because Planned Parenthood does not receive enough funding.'


Remember readers, that Gosnell is a wicked, evil late-abortionist, but Planned Parenthood are the kind of guys you could leave your kids with in the creche while you go out for the day somewhere nice. When you think of Planned Parenthood, think of fluffy rabbits, sunny days and a walk by a river. The breeze is gently blowing in your face and little lambs skip around as...

'Planned Parenthood prides itself on putting the safety and needs of its patients first, and treats everyone equally, regardless of their income. It works with state and federal governments to maintain proper standards at every one of its clinics.'

'Rather than invigorating the right, the Gosnell case should invigorate, and encourage, supporters of family planning and abortion rights.'


And who created Gosnell? It certainly couldn't be the opportunistic serial killer himself - nor a culture that deems human life to be as sacred a snotty handkerchief in a Central Park litter bin. No, you nasty pro-lifers. You created Gosnell with your evil pro-life ways!

'The anti-choice crowd wants us to be ashamed of Gosnell. But it's their shame, because they are the ones who made him possible.'


The answer to Gosnell, then, in the eyes of a Guardian writer, Sarah Jane Stratford...

'If you really want to preempt the Gosnells, provide sex education in schools. Provide access to a wide range of affordable birth control, covered by health insurance. Crack down on pharmacists who refuse to fill prescriptions for birth control.'


Just as in the 200,000 unborn deaths a year abortion industry in the United Kingdom, I would imagine that it is not too hard to come by condoms, other forms of artificial birth control and sex education in the US, but, more than this, there appears to be a reluctance of the Guardian writer to examine the morality of abortion and what it really means for the unborn child and for the state of motherhood wherever it is provided. Abortion kills children and scars women. It has been even known to kill them. Well, what's the point in getting upset about it, I suppose...this is The Guardian: The Guardian of the abortion industry, that is. In conclusion:

'Gosnell committed ghastly crimes and will be punished. It's time to stop punishing the women who need proper reproductive health care and have committed no crime, except being too poor to afford it.'


Read: Let the mass culling of poor babies begin, or rather, continue at 'break-neck speed'!

Sadly, Gosnell, as far as I know, couldn''t make the print edition of The Telegraph either. I guess he was busy that day standing in the dock as the man the liberal mainstream media would rather you didn't know about because he doesn't fit the 'abortion is a fun day out for the whole family' narrative. If you wanted to know about this story past few weeks, you more or less had to solely rely on Catholic journalists like Tim Stanley of The Telegraph and, as he describes the group hated by the liberals, 'crazy right wing bloggers'.

The BBC just about managed to cough up a little story at the very bottom of their website today. Their coverage of the story has not been particularly vast. Why should it be, though? It's just a local story in the US like the Boston bombing was. The headline of Gosnell's conviction has disappeared on the same day it appeared, unlike the news of Angelina Jolie's double mastectomy which is obviously far more important.

It's ironic, really, because the mainstream media, who propagandise really rather effectively for the abortion industry (especially Auntie) saw a very important story and wanted to 'terminate' it. 'Is this a story?' they asked, and took a great deal of time debating within themselves as whether this serial baby killing villain making millions of pounds from his butchery scandal was alive as news or not. 'Does this story have a life?' they asked? Truth came into the World and the press tried to bury it, flush it down the toilet and snip its spinal column, but those who care enough about truth, justice, the unborn and the born alive kept the story burning in the not-so-mainstream media and of course, Twitter.

Otherwise, you'd probably never know who this man is. May God bless Tim Stanley and Damian Thompson for doing what they can to keep people informed about the horrors of Gosnell's abortion clinic, but it is really quite sad that a newspaper with such a prestigious history cannot put this story where it belongs - at least, somewhere in its pages in the print edition.