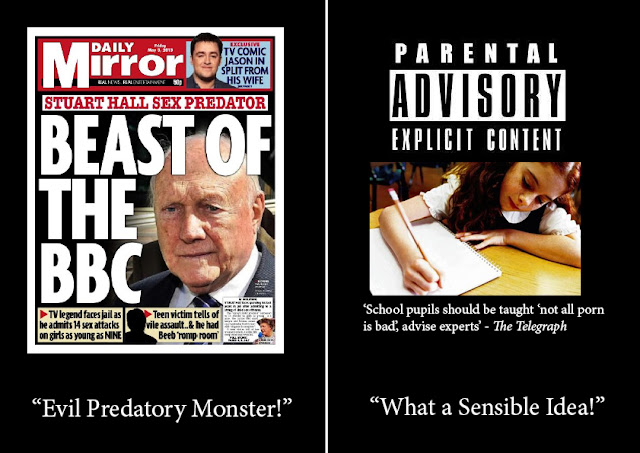 
So, after all this time, Peter Tatchell, Harriet Harman and the 'paedophile rights' crowd get what he and they always wanted - the minds, at the very least, of your children. Astonishing how easily evil can slip under the radar isn't it? Vote UKIP and pray the Rosary. They can be no worse than the bunch of clowns (and Fabian fifth columnists) in Parliament and its time the 'experts' were shown the door as well.
at May 04, 2013

The next thing we'll see is the LGBT crowd infiltrating Ukip. I notice there's already a LGBT affiliated group. There a clever lot, they can see the way the wind's blowing.

Since history repeats itself I ask when in the past has this virulent strain of madness been inflicted on the populace? I would just like to know how it ends.

Off topic a bit but just read this article by Melanie Phillips on the importance of the traditional family in the rearing of children. Its very Catholic in many ways but I'm sure our Bishops would disapprove because its not pro-left.

Its also very good at pointing the finger at why so many of the left leaning media like the Guardian and BBC seem to hate the traditional family or at least play down its importance.


An excellent post - your prescient
views ring horribly true. Thanks for your articles, courageous and Catholic.

Laurence 'loving faithful mutually exclusive relationship' is not part of the gay marriage legislation - remember the only 'sexual' grounds for same-sex divorce is heterosexual activity...each partner has a right to do whatever they want sexually with any amount of same-sex individuals.
So technically a school does not necessarily need to be restricted in its promotion of same-sex sexual activity...
Technically one might envision complaints that representing two same sex individuals engaging in faithful exclusive sexual activity is actually homophobic and oppressive in that it's enforcing socio-cultural pseudo-nuclear family stereotypes where legally none need exist.
Technically there might come a time where you might be only allowed to 'educationally portray' same-sex couples providing you have three sets - sexually exclusive, same-sexually indiscriminate and a final set who never meet or communicate outside the few minutes of signing the marriage licence and live entirely separate lives.

The 'gay rights' lobby has never been anything more than a conduit for the normalization and acceptance of paedophilia. To see the evidence for this one need look no further than Peter Tatchell's arguably criminally culpable letter of 1997, calling for the age of consent to be lowered to legitimize acts of sodomy upon 14 year old boys.

These people are bona fide psychopaths. And they're currently dictating policy to every ruling elite in the Western world.

Peter Tatchell has never advocated adults having sex with children. He does not support this. He says adults should NOT have sex with children. He has never advocated the abolition of ages of consent. He has said that if young people of similar ages have sex below the age of 16 they should not be prosecuted, providing they both consent and there is no coercion, manipulation or exploitation. Treating these young people as criminals is wrong. They need counselling, not prosecution
Read here:
http://petertatchell.net/lgbt_rights/age_of_consent/Under-age-sex-Statement-of-clarification-by-Peter-Tatchell.htm

Sadly, Peter Tatchell did advocate for the normalization of child-adult sexual relationships. In a letter to the Guardian newspaper (where else, indeed?) on June 26, 1997, he remarked that:

"The positive nature of some child-adult sexual relationships is not confined to non-Western cultures. Several of my friends – gay and straight, male and female – had sex with adults from the ages of nine to 13. None feel they were abused. All say it was their conscious choice and gave them great joy....it is time society acknowledged the truth that not all sex involving children is unwanted, abusive and harmful."

Of course, Peter's weasel words in his 'clarification' about not condoning sex involving "coercion, manipulation or damage" is simply a truism. It is that he believes that sex with a 9-year old can constitute anything other than an abuse is what is so frightening.

I'm glad here as well that you linked to Mr Tatchell's own website because, until I read the piece you cited, I didn't realize that Peter had actually been defending pedophilia since at least the 1980s, and on quite a substantial number of occasions to boot.