The 'run in' to the departure of Pope Benedict XVI and election of a new Successor of St Peter is beginning to look rather dramatic and you don't have to be a 'Vatican insider' to see that Benedict XVI, with great care and concern for the whole Church, is making some wise final touches to his pontificate.

Firstly, we hear that Cardinals with the responsibility to elect the new Pope will hear the full truth of the Vatileaks scandal and the report of the commission put in charge of gathering information on the document leaks that placed distrust and suspicion at the heart of Vatican life. The contents - under code of papal secrecy thus far - will be made known to the Cardinals on 1 March. This could, for obvious reasons, effect the choice of the election of Benedict XVI's successor and could also 'narrow the field' somewhat in terms of that choice.

Secondly, we hear, too, that there will be some alterations to the ritual for Benedict XVI's successor's inauguration as the new Pontiff. CNS tells us today that:


'Pope Benedict XVI has ordered several changes to the Masses and liturgies that will mark the inauguration of the next pope's pontificate. Rites and gestures that are not strictly sacramental will take place either before a Mass or in a ceremony not involving Mass, Msgr. Guido Marini, master of papal liturgical ceremonies, told the Vatican newspaper Feb. 22. One of the most visual changes, he said, would be the restoration of the public "act of obedience" in which each cardinal present at the pope's inaugural Mass comes forward and offers his allegiance.'


Having recently lamented the sins of disunity, pride and self-promotion within the Church during a homily at St Peter's, the Holy Father is paving the way for his Successor, the fitter and younger man to fill Peter's shoes, carefully.  I think we can safely assume that all is not well within the Vatican and that the Holy Father, who spoke of his earnest desire not to "flee for fear of the wolves" at the beginning of his Pontificate is now fully aware of who the enemies of his papacy are and would not wish what His Holiness has experienced to be visited upon any Successor - not even his enemies.

It is interesting that all Cardinals will have to make an 'act of obedience' to the new Pope. It sends a clear message to those Cardinals and to the Church that the Pope really is Peter, to whom obedience is owed and expected, by virtue of the unique Office given to him by Christ to teach, guard the Church and defend the Deposit of Faith.

His Eminence Cardinal O'Brien has been on TV thinking aloud on the issue on what His Eminence deems to be the potential prospect of the next Pope addressing the issue of married priests, clergy and priestly celibacy.

The Holy Father has not even properly stepped down yet - he will vacate the Chair of Peter on 28th February - and already some very senior figures in the Catholic Church in England, Wales and now Scotland are sowing some confusing seeds in the media, giving the impression, at the very least, that the Catholic Church is deeply divided on some quite important issues. Is it really helpful or wise for Cardinals and Bishops to exploit or seize the twilight of Pope Benedict XVI's reign to advance such controversial and divisive 'debates' in the world's media or attempt to 'set the agenda' for the next Pope? Is this the time for such statements? In Lent? With the Holy Father still on the Chair of St Peter? Is the BBC the forum for such statements to be made? Does this not foster confusion and assist the Church's enemies? Could this even be called 'dissent'?

It is an excellent idea of Pope Benedict XVI to ensure Cardinals take an 'act of obedience' to his Successor. Funnily enough, Cardinal Keith O'Brien made a similar 'act of obedience' - or rather 'profession of faith' when he was made Cardinal by Blessed Pope John Paul II on the Feast of Our Lady of the Rosary, 7 October 2003. In the light of what His Eminence has said, it makes for interesting reading: 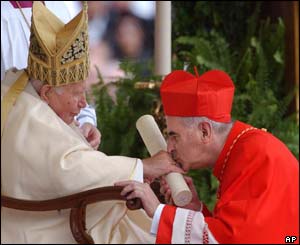 'Furthermore, I having been called to be Cardinal by pope John Paul II, state that I firmly hold and maintain all and everything taught by the Holy Catholic Church concerning faith and morals, whether solemnly defined or asserted as part of her ordinary Magisterium, especially those doctrines touching the mystery of the Church as the Body of Christ, the Sacraments, the sacrifice of the Mass and the primacy of the Roman Pontiff.


Oh dear! Ah well, its only an 'act of obedience', isn't it? A little act of disobedience isn't anything to worry about. Mary, Mother of Christ, Mother of the Church, pray for us. For those who share the Holy Father's genuine and deep concern for the Bride of Christ and who, today, feel saddened by recent statements by senior figures in the Church's Hierarchy, you can watch a lovely slideshow of Pope Benedict XVI's life here. While you watch it, pray for His Holiness Pope Benedict XVI, pray for his Successor and pray for the Universal Church.

excellent post, imho. Thank you. I read that Bishop Egan is reported as supporting the Cardinal in Scotland. That shocked me.

As far as I know, Father, this is an issue of discipline in the Church - it can be subject to change - the Eastern Churches have a different discipline.

I just think its kind of weird that such issues are being raised by high ranking prelates now at this crucial time when we are meant to be gathering in support for Pope Benedict XVI and his successor.

Stuff like this just adds to the idea that the papacy - and the Church - is in a period of great confusion, division or even crisis.

Good post, thanks.
I take the view that these matters are not so much being raised by these prelates as being ill-considered off-the-cuff responses to daft questions raised by ignorant media interviewers.

In the light of His Eminence's vow of obedience, explicit in terms of defending clerical celibacy, it appears to be more serious than that.

But I take your point.

My understanding is that even married lay men who became priests renounced sexual relations along with their wives in order to be Priests.

Neither did these priests marry women AFTER ordination, surely.

Yet none of this nuance is being reported when this issue is suddenly thrown into public discourse.

The idea of lonely priests (welcome to the Cross!) marrying ladies once already ordained would be kind of crazy, having already married Jesus Christ.

It seems increasingly likely that the one true Faith will have to be defended by the laity.

Sadly, it would appear the explicit vow is necessary.