The Sweet Eyes of Tender Pity 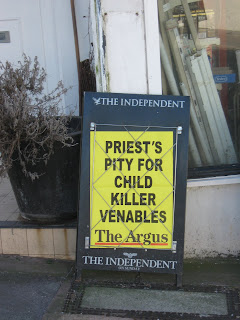 Browsing The Catholic Herald website the other day, I was gobsmacked when I read that Jon Venables, the young man almost universally despised for the killing of Jamie Bulger, has turned to the One True Faith for refuge and hope, having sought out a Catholic priest in prison, where he is confined having been convicted of child pornography offenses.

In reality we should not be surprised. When the World judges it seldom does so in the light of God's unfathomable mercy. More rarely, does it wish to walk a mile in the shoes of another before casting judgement. More rarely still, does it have the humility to acknowledge its own sins as grievous faults which, too, deserve Divine retribution. God's justice is so much sweeter than earthly justice for He is full of tender pity and compassion. The World cannot comprehend His love and, of course, the pity and love of God's friends on Earth. There is no greater gift on earth than the gift of Faith.

'Child killer Jon Venables has turned to religion – and claims God will forgive him for his crimes. Prison sources said he ­had asked for a Roman Catholic priest to visit him in his cell and spent three hours talking to him. Since then he has made a crucifix out of string and has been given a set of ­plastic rosary beds.

And officers at the Category A jail where he is being held wonder if his sudden interest in religion is genuine. “It’s a well-trodden path for sick killers like Venables to find God,” said a prison source. “They think that whatever they did in the past will be forgotten because they have suddenly ­become religious. He’s been going around talking about God and how in his eyes he will be forgiven for his sins. But it is a bit strange that he has never mentioned religion before and has only started ­talking about the Bible since he was jailed for the child porn offences a ­couple of weeks ago. It has disgusted people in the jail – especially those who have had to listen to him talking about God and the Bible. Everyone thinks it is an act on Venables’ part, and is some sort of bid to make his life in prison easier.”

However Venables, 27, will never be allowed to attend Sunday services in prison as he is kept segregated from other prisoners for his own safety.  When Venables was recalled to jail for breaching his parole Roman Catholic priest Ray Blake sparked fury when he wrote on an internet blog that he felt “immensely sorry” for him.'

The World reacted similarly when Myra Hindley converted to Catholicism under the care of Lord Longford, commonly derided as a "holy fool" for his generous efforts in bringing the notorious child killer to the Faith of Christ. The reality of God's Judgment is that we will see on the Great and Terrible Last Day many of those the World thought of 'beyond redemption' taken into Paradise, while many the World thought were just consigned to Everlasting Fire and all of God's Elect will rejoice in His Justice and in His Mercy forever in Eternity. If we wish to be on the side of the veil where God reigns as King, then we should pray for a love that 'mirrors' His rather than the hacks at The Mirror.
at August 27, 2010

I liked this post..with God all is possible.

"Divine society is above human society. What the latter cannot achieve, the former can. What is impossible for human beings is always possible for God." The Apostle of Prisons--Father Marie Jean-Joseph Lataste, OP, in 1866.