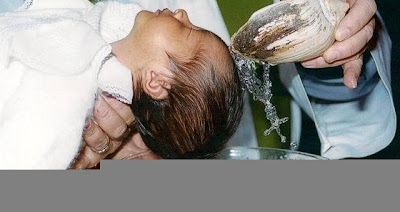 I took a break from the topping up of the green slate chippings (near a tonne of them!) to go and be in solidarity with the Abort 67 pro-life group who bear witness to the rights of the unborn on Tuesdays.

I got there and nobody was there and the rain was not half as bad as I had thought it would be so I am wondering if they are in Hollingbury Police Station again.

After Mass, which I managed to get to before the Gospel, a parishioner told me about the picture above which has had a village in Spain in awe. Fr Tim Finigan blogged on it in March, so it is not 'hot off the press'.


'An amazing picture became a message of faith in Spain. This was taken at the baptism of Valentino Mora, son of Erica, a single mom of 21 who asked the photographer to take a picture of her son for free. The photo of the baptism of Valentino Mora is sweeping the Internet, because at the time the priest pours the Holy water over his head, the water flows in the shape of a rosary (see photo above).

This story began at the Parish of the Assumption of Our Lady in Cordova, Spain, where the baptism of a one month baby took place. At the time that Valentino came to the baptismal font for the sacrament of baptism, Erica asked the photographer Maria Silvana Salles, who was hired by other parents baptizing their babies, to take a photo of her son as a favor, since the young mother had no way of paying for it. The photographer, moved by Erica's request, agreed to take a photo of Valentino.

Maria Silvana works with a traditional camera and had to send the film to be developed to a shop in Cordova. When she received the photos, she noticed with surprise that the water poured from the head of Valentino was a perfect rosary. The photo of the baptism of Valentino has awakened faith in the people of Cordova who come to the humble home of Erica and Valentino Mora to touch him. The truth is that this sign of faith has mobilized this town in Cordova, whose neighbors go to Maria Silvana's store to buy the picture as if it were a prayer card.'

Anyway, so at approximately half past one today, I nipped down to the Wistons BPAS Centre for the Wilful Murder of the Unborn and took with me some leaflets from Life, the excellent charity that helps women and couples with practical necessities, gives counselling during pregnancy, as well as post-abortion therapy and a few toys, thinking that maybe a few cuddly children's toys and books might be less intimidating than a massive graphic poster of an abortion at 8 weeks. The pro-life group were not there, so I just left a toy telephone, a few cuddly toys, an image of Our Lady of Consolation and some leaflets for Life UK.

Guess what? When I drove past at 4pm to see how the new protesters were doing and to my shock and surprise, it appears that they, too, have been apprehended. I can only assume they are being questioned at Hollingbury Police Station right now. Don't worry. I instructed Percy the Pig, Leonard the Lion, and Marvin the Mouse not to tell the fuzz anything but to keep absolutely schtum about it until their lawyers arrive.

Re the photo - I can't see the relevance to the posting but it's amazing what can be doe with photoshop!

Isn't it more likely that the clinic cleared away the 'litter' you left outside? and that nobody else turned up to demonstrate coz of the rain?

I've no word from the co-ordinator, who usually emails me back.

Yes, it's amazing what you can do with photoshop, so it's a wonder the photographer doesn't do it with every single baptism picture.
You'd be set up for life running that little stunt.