The SSPX and the Dangers of 'Playing Hard to Get' 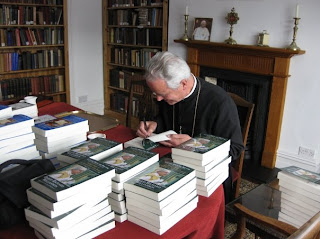 I see from Fr Ray Blake's blog, via Rorate Caeli that Bishop Richard Williamson of the 'I want to break free' faction, the Society of St Piux X (SSPX), has been airing his thoughts aloud on his personal blog, to which one apparently has to subscribe in order to view! How very typical of Williamson's brand of Catholicism!

What hits home is the high-handedness with which he writes and his shocking arrogance, as if, somehow, the person with which the SSPX is dealing is the area manager of Waitrose in a customer care complaint, rather than the Successor of St Peter who holds the Keys to the Kingdom of Heaven. Really and truly, in all honesty, the true position of the SSPX  towards the Holy See should be as that of beggars, since by embracing schism they have placed not only their immortal souls but those of all who followed them in jeopardy. I'm sure that's somewhere in the Catecheism.

'From France and Germany, I was told me a few weeks ago that a large proportion of Catholics attending SSPX Mass centres are only hoping and waiting for some agreement to come out of the discussions. If - repeat, if -- this is true, it is very serious. Such Catholics may get full marks for wishing not to be cut off from what appears to be Rome, but they get low marks for not grasping that as long as the discussions remain doctrinal, there is no way in which the neo-modernist teaching of Vatican II can be reconciled with the Catholic doctrine of the true Church. Such Catholics may venerate and love Archbishop Lefebvre as they see him, but they have not understood what he was all about. They had best wake up if they are not in one way or another to fall into the arms of the neo-modernist Romans.'

What's with the name calling!? Are you Ian Paisley or something!? What appears to be Rome!? What appears to be Rome!? It is Rome for crying out loud! We may be a Church with a large number of 'neo-modernists' and there even may be many of them in Rome, encircling the Papacy, even, but it was not the doors of the SSPX that Our Blessed Lord told St Peter that the 'gates of Hell will not prevail against' but those of the One True Church built on Peter!

We can all sympathise with these staunch traditionalists to a degree, because quite rightly they see Doctrine and Liturgy as feeding each other in a happy symbiotic relationship which lead hopefully to holiness of life, charity and truth. The liberal excesses of those who interpreted Vatican II to mean it was time to throw a disco in the Church and regard Communion as a vol-au-vent have been damaging to the whole Church. Yet, the Church is still the Bride of Christ, whatever the sins of Her members, Her clergy and even the most glaring of liturgical volte-faces which neglected Christ's place at the heart of the Mass.

Holding as sacred and unalterable the Doctrines of the Church is useless if you have severed yourself from the True Vine, if you rupture the Mystical Body of Christ and place yourself in a dark corner telling Holy Mother Church, "We worship God better than you do, look at your Masses now and look at ours. Ours are much better! Told you we were right!" Even the most sinful soul can smell that kind of diabolical Pride a mile off. Our Lord told a Parable about that and it is known commonly now as the Parable of the Prodigal Son. The SSPX are the older brother tutting, mumbling to themselves and wondering how God could still love this Church - His Church! Still, I know that that charge can be levelled at the 'Vatican II' element within the Church who shudder at Pope Benedict XVI's generous outreach work which has come at much cost to himself.

How deceived Williamson and Fellay are and how easily taken in they are by the wiles of the Enemy! Christ's Church may be a Church marred and sullied by liberalism, 'neo-modernism' and sin. She may be a Church led by men who are wayward and so downright negligent in their duties that they can't organise a Papal Visit to the UK and make it even appear as if they are loyal to the Holy Father and the Magisterium. She may be a Church with Masses up and down the country that resemble the Annual Folk Music Convention of Cheltenham, but She is still Christ's Bride!

I know the excommunications have been lifted, but, let's face it, it takes real humility to return joyfully to the Church after having been lapsed for so long and every lapsed Catholic worth his salt knows that. Every soul in mortal sin makes that leap in the Confessional from Darkness to Light and it may have been years. It takes strength of character, courage and bravery to get back into that Barque and begin fighting the good fight along with other traditionalist Bishops and Priests who stayed and fought for what they believed was the true Mass, within the Church, like the Fraternity of St Peter. It also takes humility to forego the power and prestige you have acquired through your rebellion! That takes guts! That takes prayer! That takes the love of Christ!

That is what many Priests did do after Vatican II. They stayed and they fought for Christ! That takes sheer unadulterated courage in the face of the humiliations that followed and perserverence in prayer and action to see that bearing fruit in abundance years later, with more TLMs springing up over the country, thanks to the LMS and Priests enthusiastic towards it and other similar groups which are utterly loyal to the Pope and to the Magisterium and to the 'Real Mass'! Honest Catholics know that you cannot 'pick and choose' Catholic doctrines - and that goes for loyalty to the Holy Father too!

Does the SSPX have the humility to return fully and to 'sober up' after their years in the wilderness cut off from the True Vine? I sincerely and truly hope so, as I am sure does the Holy Father, Pope Benedict XVI, but reading Bishop Williamson's words, they sound like those of a man with something of a death wish, a man who has put his immortal soul on the line and doesn't give a flying one which side of the veil it ends up, neither his, nor those in his care! The Church is still the Instrument of God's Salvation, still the Ark of Truth and She is still Christ's Bride, Bishop Richard Williamson! This one's for you!

Well said. He is loathe giving up the idea of himself as pope. In addition to desperado, you might also add this contribution.