Pope Francis Not a Freemason 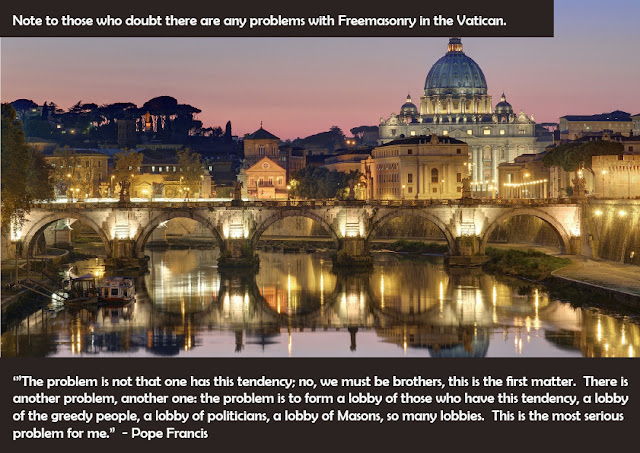 So, not so much of a conspiracy theory after all then...

Let's be frank here...no Pope has ever, as far as I know, publicly let on that there is a 'problem' with the power and influence of Freemasons in the Vatican. More power to your elbow, Your Holiness.

I'll be even more frank. The first thought I had about our beloved new Pope was that he might be a Freemason, only because when His Holiness greeted the crowd he said, "I want to build a big brotherhood."

Nothing sounds more masonic than a 'big brotherhood'. When His Holiness said that, I thought, 'Oh no! What if the Pope's a Freemason?'

In fact, I became so worried His Holiness was a Freemason that I typed into YouTube, 'Pope Francis Freemason' and came up with this insanity...


So thank you, Your Holiness, for putting my mind to rest, since it stands to reason that no masonic Pope would talk about the influence of the Freemasons in the Vatican.

Padre Pio told Father Villa that Our Lord had designs upon him and had chosen him to be educated and trained to fight Freemasonry within the Church. The Saint spelled out this task in three meetings with Father Villa, which took place in the last fifteen years of life of Padre Pio. At the close of the second meeting [second half of 1963], Padre Pio embraced Father Villa three times, saying to him: ‘Be brave, now…for the Church has already been invaded by Freemasonry!’ and then stated: ‘Freemasonry has already made it into the loafers (shoes) of the Pope!’ At the time, the reigning Pope was Paul VI.

The gesture of placing the hand on the solar plexus is common in Catholic liturgy. I used to serve Mass and the thurifer, for example, would place his left hand so while with his right hand he swung the censer.