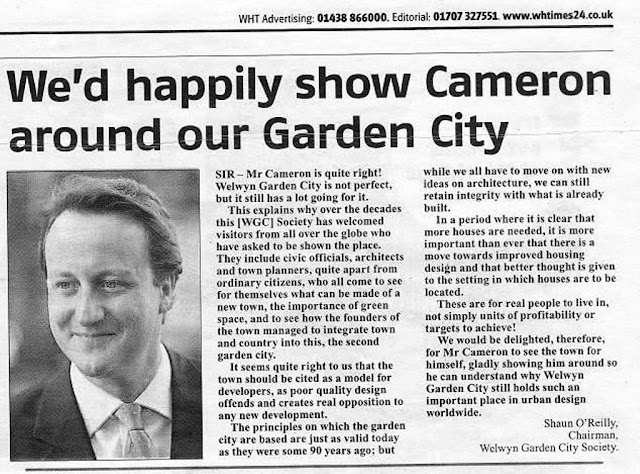 I used to live in Welwyn Garden City with my parents. I was raised in the first Garden City, that is, the World famous Letchworth Garden City, but was born in Hitchin. It is famous for having the World's first roundabout. I believe a film is being shot there as we speak, starring the other funny guy from funny movie, Hot Fuzz.

Both cities were built by a Quaker called Ebenezer Howard (not Scrooge). Not single-handedly, of course. He planned them so that each house would have a garden - except for the really poor areas where there are some tower blocks - but I think this may have been a more modern development.

The poor estate in Letchworth is called Jackman's Estate. When I was growing up we were all afraid of going there in case we got beaten up. Both towns, being built by a Quaker, adhered to the town planner's strict Quaker rules concerning alcohol, so there were barely any pubs. Do Quakers still have those anti-alcohol rules?

When I was young, there was only every one pub in Letchworth called the Black Squirrel, so named because Letchworth was famous for having some black squirrels not associated with many other parts of the country. People were told never to go there because that was where drug dealers went. The last few times I went back to Letchworth, there were more pubs. I think it has lost its Quaker roots now. I believe there was a famous poet who wrote a poem about Letchworth.

According to Wikipedia, 'In April 2008, a poll in the town on the question 'Should Letchworth Garden City Council be dissolved?' resulted in over 76% of respondents voting in favour of its abolition; turnout was 15.6%.' As you can see, Letchworth is a pretty exciting town all round.

I went back recently and went to Mass there. I remember the liturgy being not so great. My namesake, Laurence Oliver lived there for a time and Michael Winner attended its private school which has an outdoor swimming pool called St Christopher's. It was at this playing field that I broke my arm while attempting a scissor kick at the age of 16. A doctor at the Lister Hospital yanked my arm back into place under laughing gas. James Lovelock, Royal Society pagan and Gaia Theory specialist, was born there, as was a serial killer called John Martin Scripps.

I've still got one or two friends in Letchworth Garden City and a friend in Welwyn Garden City who has just got engaged (many congrats to the couple!). I'm told that she more or less single-handedly got the parish priest to start celebrating the Latin Mass a year ago. Deo gratias!

I'm astonished that my close family are thinking of moving back to the area because they lived in Hertfordshire so long and I had thought they had had enough of it. I grew up in a lovely cul-de-sac called Netley Dell on the Lordship Estate. We had a nice house, half brick and half white plastic with a field at the back owned by a farmer and we would feed the horses carrots and sugar cubes.

At Welwyn Garden City, I studied Media Studies, English and French for A Level at Oaklands College in Welwyn before going to Liverpool University to study Politics, though I believe David Cameron would regard this as a polytechnic.

The best thing about Letchworth was always the wave machine at the big swimming pool. During the summer breaks of University, I had a job at Halfords on the Industrial Estate. There was a massive Tesco built there, also, I think and I recall how this impacted upon local traders in the town centre.

I was quite a good salesman at Halfords when it came to car radios and roof racks, a talent I've never been able to replicate since.

John Bejteman wrote a satirical poem about Letchworth that goes as follows:

Tell me Pippididdledum,
Tell me how the children are.
Working each for weal of all
After what you said.
Barry's on the common far
Pedalling the Kiddie Kar.
Ann has had a laxative
And Alured is dead.
Sympathy is stencilling
Her decorative leatherwork,
Wilfred's learned a folk-tune for
The Morris Dancers' band.
I have my ex-Service man and
Mamie's done a lino-cut.
And Charlie's in the kinderbank
A-kicking up the sand.
Wittle-tittle, wittle-tittle
Toodle-oodle ducky birds,
What a lot my dicky chicky
Tiny tots have done.
Wouldn't it be jolly now,
To take our Aertex panters off
And have a jolly tumble in
The jolly, jolly sun?

Note: 'weal' = "The welfare of the community; the general good."

As a matter of fact, we had a morris dancer who lived in our street. I remember him being very entertaining. It appears Letchworth was built as a kind of utopian dreamscape at a time when social reformers were doing their best to create 'new towns' that were world's apart from the grime and poverty of the industrial revolution. After Letchworth, Liverpool and Welwyn and some time in London with a great charity called ATD Fourth World (set up by a Catholic Priest), I came to Brighton to study an NCTJ in Magazine Journalism.

I've been trapped in the spiritual vortex that is Brighton ever since. And that's the story of my life. I've no great desire to move back to Letchworth, but I'm sure if I listened to Homeward Bound by Simon and Garfunkel I'd feel a pull. Brighton's a very easy town to get lost in, whereas in Letchworth, you just stay in because there's nothing to do and people behave as if it is a genuine commuter belt. Everyone on the train to London reads The Telegraph.

The town is most well known, I believe, for the Spirella Company which used to make corsets. For some reason, at some point this company went out of business but the place still stands and it hosts parties and weddings and stuff.

So, there it is, a brief biography and an introduction to the World's first two Garden Cities, Letchworth and Welwyn Garden City. Surrounding towns include Knebworth, Hatfield and the illustrious Stevenage which was always better for shopping in than Letchworth and most likely always will be. It's also got a cinema. Thanks for letting me take a moment to be self-indulgent and take a trip down memory lane. Ah, Letchworth...

Thanks for this autobiographical taster, and very interesting too! My uncle and auntie (both RIP) lived for many years in Welwyn Garden City, and attended the RC Church there. I believe they donated the Stations of the Cross there. Their son and his family live at Ickleford, nr Hitchen.
Best wishes for 2013, and I impatiently await your future posts!

You say that 'for some reason Spirella went out of business.' This was probably because my generation stopped wearing corsets and presumably they were unable to make anything else!

You make this town sound fascinating - I must acquaint myself with it via the Internet. Happy New Year.

As a current catholic Letchworian I was surprised Laurence that you failed to mention that Fr Adrian Fortescue the great liturgist was parish priest here from 1907 to 1923.The black squirrel is now a chinese restaurant. I think the Jackmans has become calmer now.

My family moved from London to Letchworth when i was Two. We moved to the Jackmans Estate when it was a very young community and i grew up there until my parents moved to the Grange estate across town shortly before i went to senior school.
I was so surprised at the attitude that some of my new friends took to the Jackmans estate that i took them on an adventure. They so honestly thought that venturing across town would lead them to certain death that i, for a very short time, became a hero for even suggesting such a misguided trip. As i expected, the trip opened my new friends eyes to the fact that the hell hole i grew up in was not only more open, more green, but also no scarier than their own doorstep.
Once i pointed out that the kid's from the Jackmans estate had grown up on the same story's about the grange, did they see that it was myth.

I grew up in Letchworth, on the Lordship estate and I had friends who lived on Jackmans we all heard stories about how bad the Grange was too.