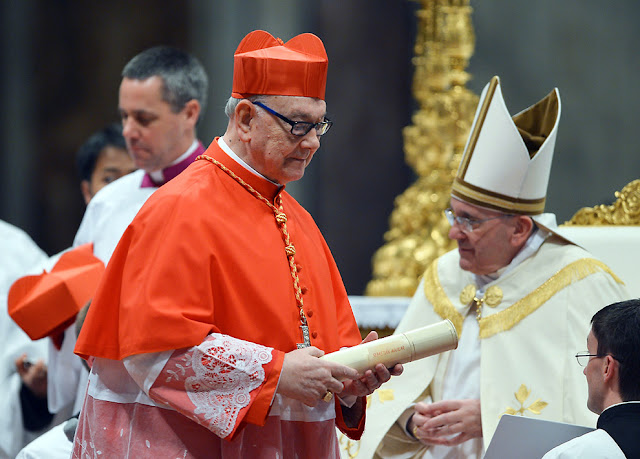 Mahound's Paradise covers the story brought to his attention by Jane Royal...

'A few distinguished gentlemen are suffering because they do not understand what Francis meant in Amoris Laetitia and want the Pope to explain it. Their "concerns" are imaginary, because the Pope said what needed to be said with sufficient clarity.

Just read it slowly if you want to understand. Some say (Amoris Laetitia) expresses personal opinions; others that it doesn't change anything; and others that it changes much. One must be more sincere and a open-minded.

The Pope expressed much about the nature of Christian marriage as a covenant of irrevocable love. And he did so as it had never been done previously in the magisterium of the Church. Taking a very realistic perspective, he says that in today's society there may be people trapped in situations of sin, from which they repent and from which, at a given time, they cannot extricate themselves; and it teaches that these people, if they are truly repentant, can receive absolution from their sins and can therefore receive communion avoiding any scandal. If those who doubt our aside their cards and go to confession, they will understand better.

Find people who are suffering and sincerely seek God. God loves, God calls, God waits with his peace. How can we dispossess them?'

If you have "concerns" you should read it slowly. Then your "concerns" will disappear.

The Pope is great and his teachings on marriage are great. So your "concerns" are null and void.

If you have "concerns" you are not a real Christian.

Thanks for clearing that up, Cardinal Aguilar.

Or is His Holiness only preaching a 'listening Church' for those voices to which he wants to listen?
at December 11, 2016

"Read Amoris Laetitia slowly." Aguilar may not himself be a heretic. But can we bring him up on charges of being a formal sadist?

He seems to ignore the part about the Sacrament of Penance requiring confession of the mortal sin and a firm purpose of amendment... While going to Confession they continue to live in an occasion of sin and continue to sin. So there is no valid absolution.

"people trapped in situations of sin, from which they repent"

That's an oxymoron, surely. Either they are 'trapped' (ie. continue) in their situation of sin or they repent. Their repentance, surely, is meaningless without an intention of avoiding the sin in future?

I'll say one thing about Amoris Laetitia: it has brought some prelates to new heights of arrogance and toadying.

Perhaps Cardinal Aguilar could read the above sentence very slowly.

I was puzzled by some of the Google garbling at the end, so here is a slightly better version from the original letter. No change of substance, but clearer English.

"Some learned gentlemen are upset because they are unable to understand what Francis wanted to say in Amoris Laetitia and they would like the Pope himself to explain it. These "doubts" are imaginary, because the Pope has said what seemed opportune to him with sufficient clarity.

The Pope expounds the nature of Christian marriage as an irrevocable covenant of love in a beautiful way. And he does so as it never done before in the Church's magisterium. And, with very realistic perspective, he says that in the today's society there can be people trapped in situations of sin, about which they repent and from which, at a given time, they cannot extricate themselves; and he teaches that these people, if they are truly repentant, can receive absolution from their sins and can therefore receive communion while avoiding every scandal. If those who are doubting put aside the paperwork for a moment and went to confession they would understand better.

"They would find people who are suffering and sincerely looking for God. God loves them , God is calling them, God is waiting for them with his peace. How can we be the ones to throw them out?"

The implication of the last sentence of the penultimate paragraph is that these learned gentlemen need to forget about their academic concerns ("put aside the paperwork") or in other words just get off their high horses and go to confession themselves. (Their concerns are actually sinful?!) Also notice how the whole premise of the letter is that the "dubia" submitted about are being (wilfully?) misinterpreted as personal doubts or some sort of crisis of faith these sad, benighted individuals are having, rather than a formal request for clarification as to how the Pope's teachings can be reconciled with the teachings of his predecessors.

At least AL is beginning to show who are the goats and who are the sheep. We just need a lot more 'sheep' to step forward.

His understanding of repentance is totally puerile. As previous posters have stated, if people have no firm purpose of amendment and intend to continue in their sin, then there is no repentance. This is so Catechism 101 that it is incredible they can keep trotting out this crap with a straight face - are these the "coprophiliacs" that Frank was talking about? They obviously must believe that everybody else is a coprophagiac if they expect us to swallow this horse....

But also, what is this:

"The Pope expressed much about the nature of Christian marriage as a covenant of irrevocable love. And he did so as it had NEVER BEEN DONE previously in the magisterium of the Church."

Francis is the first Pope to teach that Christian marriage is a covenant of irrevocable love??? Beggars belief.

He's part of the itching ears crowd that St Paul warned us about. Ever learning and never able to come to the knowledge of the truth.

"the nature of Christian marriage as a covenant of irrevocable love. "
But then sometimes people are 'trapped' into breaking that covenant permanently and irrevocably, and transferring their love irrevocably to someone else.
Yes, I see, Your Excellency.
I know quite a few that get trapped several times - what kinda bad luck is that!

Deacon Augustine: I think it can be read as "it has never been done in that way before" - I think I can agree with that!

Nicolas Bellord, I think if you check St JPII's 129 addresses on the "Theology of the Body", it has been done in exactly that way. I know there are different views on the value of his teaching on T.O.B. but one aspect it covers in depth is the concept of marriage as an irrevocable covenant of love, drawing on similar teaching in Gaudium et spes. In fact a lot of the less controversial parts of AL have been lifted from T.O.B.

Deacon Augustine: What I meant was that it had never been done in such a way that suggests that adultery can be okay!

Nicolas Bellord, thank you for clarifying my dense reading of your intended meaning. In that case, I couldn't agree more!