New Look for the Guild of Blessed Titus Brandsma 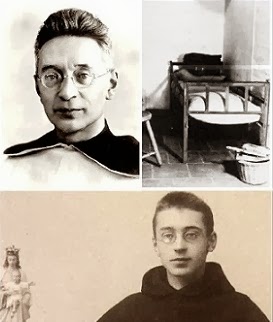 Well, half of England is under water and the UK Government is drowning in a flood of reproaches over its river dredging policy but as Catholic bloggers we remain determined to stem the flow of secular atheism washing over the world through prayer and evangelising over the internet.

With this in mind, I have given The Guild of Blessed Titus Brandsma a design overhaul to give it more of a 'magazine feel' in a concerted effort to produce an online Catholic journal that may not have the circulation of The Tablet, but that actually has some real Catholicism in its arteries.

If you are a Catholic blogger and wish to join the Guild of Blessed Titus Brandsma email me at englandsgardens@gmail.com. We seem to have plenty of members but not many bloggers contributing articles to the website, so I encourage those who are members of the Guild to contribute their reflections on the Holy Faith to the Guild blog and others too to join our league of budding Catholic writers spreading the Faith of Christ. The Guild will be meeting in the Summer and will update readers with details of this gathering nearer the time.

Yours truly has been privileged to have an article published in the LMS's magazine, 'Mass of Ages' and I have received some positive feedback over the article which can be read as a pdf. Perhaps unsurprisingly, the article is about His Holiness, focusing on the Pope and the media minefield, the bombs of which we have seen exploding on 'the battlefield' wounding loyal Catholic soldiers over the last year.

As I say, you can read the article here, but if you join the LMS, you receive a copy of their enjoyable 'Mass of Ages' magazine every quarter, as well as discounts off their pilgrimages and other benefits. All this and joining a network of Latin Mass loving Catholics for just £25.00 is a bargain, so consider joining today. Go on! You know you want to!

Dr Joseph Shaw, Chairman of the LMS, also has a very interesting series of reflections on whether the Church can alter Her position on marriage which are well worth reading. These can be read here, here and here. If only The Tablet could produce articles like that...
at February 10, 2014

Congratulations on the publication of your article! You really deserve to make a good living doing this. Communication skills like yours will be in short supply as Western civilization reverts back to pagan troglodytism.

I can't read it on my computer now. It's all jumbled up and illegible. You've broken the internet.