A Crisis of Biblical Proportions 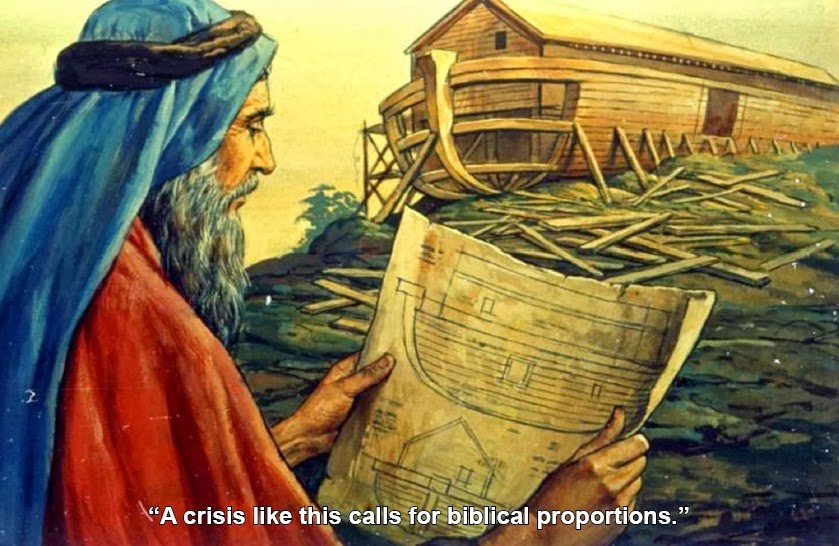 In short the flood of antichrist is washing away all Catholic conscience and sensibilities. and we seem to be damn proud of it - at least where I live they seem to be.

I do not know if you know the story of the parish of Louth, home of the Lincolnshire Uprising, which was the catalyst for the Pilgrimage of Grace.

For over a year four Catholics got together (with an extended group of about 20 people). I cannot go into detail, but the parish was being run not just by liberals, but by those who support the Catholic dissent group ACTA, believe in personal interpretation of Catholic teaching, and who talk as if Catholic liturgy is something nasty under their shoe. A lack of belief in authentic Church teaching was/is generally widespread.

Having had enough of the mediocrity at Louth, and the fact that the previous priest had been bullied out of the parish for being too orthodox, enough was enough. Beyond this it was also discovered that other Catholics over a period of time had left due to the extreme unfriendliness of the liberals in the parish. In one conversation a local priest was told "You are treated like imbecile at Louth for practicing the Faith".

The group, with the permission of the priest, organised 100% authentic Catholic events. At least one per month. All put in 100% and threw the kitchen sink at it. Needless to say everything was a great success. So you would think that things improved. Wouldn't you?

Despite the fact the genuine Catholic faith returned to this parish for about 14 months. It was unsustainable. The people who undertook the work were so lambasted by the liberals that in the end it became unsustainable. The pressure of organising relatively large events was also unsustainable when there was no support coming from the parish. In fact it was quite expensive and the group were effectively bank rolling the parish and paying for everything. In two cases the parish council didn't even pay the bill for the confirmation and First Holy Communion days. In fact someone who actually did not have very much money paid for everything in total. However, every event organised was well attended. People were brought into the church from the outside , including the lapsed. There was even the correct Catholic approach to ecumenism. The Latin Mass was a success, and other Catholic tradition returned. The smile was being put back on peoples faces after the parish being sombre and unwelcoming.

However, members of the parish council then told the group that if they did not like it at Louth then they needed to leave. Despite everything being done in line with Catholic teaching the most shocking moment came when someone stated "How dare you people bring your messianic vision to our parish".

So unfortunately the parish will be catapulted back to the dark ages. Some good has come of it however, with more people at the parish now having a Catholic identity which they do not have to shy away from.

So what was learnt from all of this? Well, it was certainly confirmed that Michael Voris is not actually 'making it up' and is in fact speaking the truth when he talks about the abuse within the church, and the protestantisation of the Faith. Beyond this all those Fatima and Sallette 'crazy' people who talk about the betrayal of the Catholic Church at Vatican II turned out to be not so crazy after all. Although all of this was known in advance it comes as quite a shock when you witness it with your own eyes 'face to face'.

I now believe that the Latin Mass is the only way of keeping the authentic Faith within the Church today. Afterall it is just about the only thing within the Church, as a consequence of Summorum Pontificum, that cannot be 'polluted' or interfered with by liberals. Then again you don't have to listen to what I say to understand this. Both Cardinals Arinze and Rajinth of the CDW have been 'crying out' for those in the new rite to follow the church documents. As they quite rightly say, it is failure to follow Church documents (specifically on liturgy) that is pushing people towards the Latin E.F. Mass.

God bless you for sharing this OPN; God required 10% be righteous to save the wretched lot.

'I now believe that the Latin Mass is the only way of keeping the authentic Faith within the Church today. Afterall it is just about the only thing within the Church, as a consequence of Summorum Pontificum, that cannot be 'polluted' or interfered with by liberals.'

the introduction of St Joseph to the Canon, which had only mentioned Our Lady and the Martyrs, was, apparently, test case for change. apparently there was no objection.


God is a rock; when we take our little nominal chisels to Him; God help us.