Will Voters Get a 'Second Chance' within a Year? 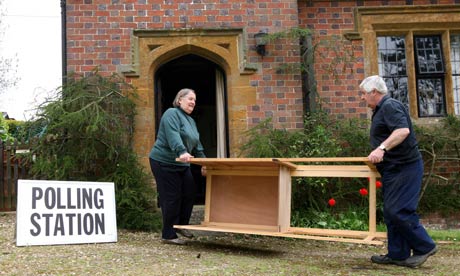 Well, I've managed to pick myself up after my 'moment of madness'. The worst thing we can do after we've gone against Holy Mother Church in our voting patterns is to go out and hang ourselves like Judas and Parliament. We have to get back on that horse and fight the good fight, just like what we said we would before polling day.

I'm consoled by the reports that voters may be asked to do it all over again within a year, political experts expecting the coalition to come to fall apart at the seams, so I may have a chance to look down the list, become exasperated again and vote .

Highlights of the election were, of course, seeing Gordon Brown lose, Nick Clegg not win and seeing Dr Evan Harris's death-ridden arse getting kicked out of the House of Commons. Fantastic. We 'reap' what we sow. It's a shame Ed Balls managed to hold on, but, hey, we can't have everything.

St Mary Magdalen's Soup Run apparently featured in a Channel 4 documentary on the impact of the recession is hitting the UK and the camera crew were at the Brighton Unemployed Families Centre Project (BUCFP) in Tilbury Place. I told the crew that the Soup Run would be a good place to find out how the recession is hitting people in Brighton as well, but they'd done their research and had already arranged to go there and to meet the co-ordinator, a lady called Karla. The crew filmed an art group taking place at the BUCFP. I'll be teaching Adobe InDesign this week during a two-day course there, so I'm glad the camera crew didn't turn up to film me nervously blagging my way through a lesson in desk-top publishing.