Annulments 'Self-Checkouts' in Supermarkets Idea Floated by Kasper, Claims Criticism is an "Attack on Pope Francis"

"Now that you have paid for all your goods, we would like to offer you a range of other products available at our store.

You have chosen 4, marriage annulments.

That a female voice from a computerised self-checkout could one day utter these words may sound unrealistic or even absurd, but Cardinal Kasper, the high ranking Churchman with the ear of the Pope has been floating the idea of 'Annulment Self-Checkouts' in Rome in the days running up to the opening of the Extraordinary Synod on the Family. And if things go the way of the controversial Cardinal with the 'Kasper Doctrine' - often confused with that of Jesus Christ, the Son of God and Founder of the Catholic Church, your local supermarket and weekly shop will become a great deal more interesting - especially if you are married.

While only a few Cardinals are prepared to discuss Kasper's proposal to make marriage annulments as easy as obtaining a Clubcard from Tesco's, the Cardinal is reportedly claiming the backing of Pope Francis, who, it has today been announced, has established a new Commission charged with the duty to examine ways in which annulments can be simplified.

Several in the inside circle of the Pope's other important advisers and a host of internationally recognised supermarket chains, including Sainsbury's, Tesco's, Wal-Mart and Iceland claim interest already in the proposal. Other leading global brands are said to be interested in the proposal which could even receive sponsorship from other global companies not usually associated with the Catholic Church, such as Planned Parenthood, Stonewall and Durex. It is thought by these companies that reconciliation with the Catholic Church in a new era of pragmatism, openness to new ideas and accommodation to evil could be underway.

"Under my proposal," said the Cardinal in the media limelight, "marriages that suffer the pain of breakdown and separation, that lead to divorce, and in many cases, remarriage, can find healing by the process of annulments in the Catholic Church. At the moment there is a rigorous procedure in place but this takes often a long time."

"This is a healthy and merciful way of re-examining whether a true marriage existed in the first place. It is becoming more clear that anything between 51% and 99.2% of all Catholic marriages are not valid, due to a number of circumstances, too detailed to go into in one hardback book alone. So you'll have to wait for my next one. Remarriage prevents many couples from putting their hands out for communion. They want communion and we want to give them communion. The only problem is the words of Our Lord Jes-, sorry, the Catholic Church's dogmatic and harsh doctrinal position. 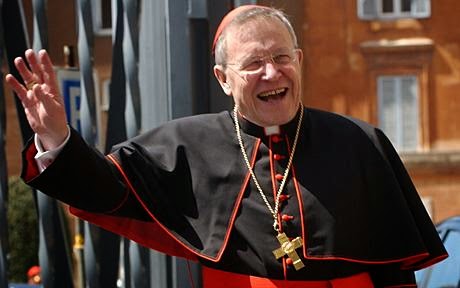 "The solution therefore", continued the Cardinal, "is to find a quick and easy way for those who require the merciful hand of the Church to intervene and rescue them from the problems associated with marriage and its breakdown to dissolve what did not exist. I was at a self-checkout in Rome at an unnamed supermarket when I suddenly realised - this is the breakthrough we have been looking for! I looked up and said to the great Architect of the Uni - sorry, the Lord God, thank you, you really are a luminous one!"

Traditional Catholic bloggers have been wounded anew since the news that Cardinal Raymond Burke, a defender of Catholic Truth and morals, is said to be moved from the Apostolic Signatura to preside as patron over a Maltese Falconry Centre Network.

Others have suggested that this need not be seen as a 'demotion' or in any way an insult to the talents of the Cardinal, but could be exactly what the Falconry Centre Network needs - the sturdy arm of a man of the Church to steer it into a more radical Catholic flight. While it is viewed by some that Francis has 'frozen out' the Cardinal, possibly from the Synod, privately Pope Francis is said to admire Burke's intelligence and knowledge of Church law and discipline, which are useful skills in heading a network of falconry centres throughout the world.

The news of the 'annulment self-checkout' model, however, has some Catholic commentator suggesting that it is possible that Cardinal Burke may be moved precisely so that no legal framework of the Church could be applied by his Court to the potential unrolling of the software to self-checkouts in supermarkets across the world.

Following criticism from Cardinal Ludwig Muller, who said in a Vatican magazine that the idea was "ill-thought through", "irreconcilable to the tradition and teaching of the Church" and "unacceptable", Cardinal Kasper replied in a German newspaper article that Muller should, "Shut it, Ludwig, because if you criticise me, you criticise the Pope, because me and him are like that, buddy. Like that, hear me! Do you want to be known as a Pope-hater? No, I didn't think so, so keep it to yourself! You're not in the 'in-crowd' now, buster! Times have changed!"

It is reported that Kasper crossed his index and middle fingers at this point in the interview to stress his point.

Concern has been raised that the investigation by Church authorities into the validity or invalidity of a marriage may not be in depth enough and that questions could easily be answered incorrectly after shopping in a rush to get to the car, and that the scanning device for relevant documents could fail to work. It is thought by many that the self-checkout annulments could be 'open to abuse', sometimes unworkable without a supermarket supervisor and that 'annulment receipts' could easily be lost or discarded accidentally as normal receipts, but this hasn't stopped news of the idea spreading around Rome and the boardrooms of all the supermarket chains across the world, who sense a long-awaited financial deal with the Vatican that will draw customers into the supermarket on their way home from Church.

More news on this story when we have it, once the work of the new Commission established by Pope Francis to find a simplified solution to marriage annulments has come back and announced its conclusions in a dossier to be released at some point during October.

Evil ideas. And instead of being forcefully condemned ( and the proponent disciplined) there is nothing but mealy-mouthed responses.

Several months ago, I ordered a book, The Annulment Deception, thinking it would document the proliferation of annulment abuse since Vatican II. Instead, the writers argued that a sacramental marriage is not even possible. Thus there is no need to annul anything, just get a civil divorce and pursue happiness. Repeat as often as necessary. I threw this book in the trash because it simply did not need to exist.
This heresy of denying the indissolubility of marriage affects so very many people. Either at the Final Judgment or some day before, it will be condemned. At that time there will be many people who will have to choose Christ or else sadly realize their will is fixed against Him. I know a few Catholics who are otherwise very strong but when it comes to this issue they falter. Breaks my heart.

I pressed "5" and got Cardinal Cupcake Cupich & Msgr. Ricca at St. Marta's House Motel 6 asking me if I was ready for my nightly turn down service.

I hung up and locked my door and turned off the lights and put the covers over my head. I was scared.

How twentieth century!
Haven't you heard of despatch.com?

This seems to be Pope Francis's particular M.O. Diabolical disorientation.

How about having them in the church entrance so you could annul your marriage on the way to receiving Communion?

I am getting confused. Are there two Fr Steven Fishers?

Did you catch the Cardinals words: Great Architecture of the Uni- oh I mean Our Lord..
ok, creepy... don't Masons use that name for their deity?
St. Michael, the archangel, defend us in this battle.....

Very amusing but . . wouldn't it be a better use of your talents to campaign for better, more thorough marriage preparation, so that far fewer marriages will result in valid requests for annulment?
Where there are valid grounds, and sometimes undoubtedly there are, it will be a great improvement if a simplified process could replace the current lengthy, bureaucratic way in which it seems to be done.

One thing that is not being addressed is that a lot of Catholics marry non-Catholics who are divorced. Will these divorced non-Catholics also be able to get their annulment cards punched without the slightest 'tsk.' I currently have 2 Catholic friends who married non-Catholics who were Previously married. The priests who married them never bothered to ask about the marriage status of the non-Catholic fiances. These friends both believe their marriages are A-ok with the Church. Obviously, many of the "small-minded rules" (as Francis calls them) are already being ignored.


Another question is this: how many annulments will you be able to get in a lifetime? As many as it takes?

This is simply not the Catholic Church I thought I was joining 12 years ago. I knew there were dissenters and apostates then, but now they seem to be in charge.