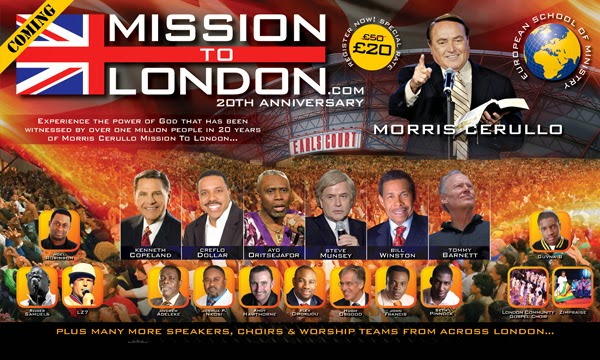 A quick flick through the Metro yesterday brought to my attention the full page advertisement for the 2014 'Mission to London'. Perhaps unsurprisingly, this is not an advert taken out by the Archdiocese of Westminster, but a coalition of what appears to be a number of 'ecclesial communities', many of which are based in the US.

It is advertised in the Metro as an event 'for people of all faiths' but I would tentatively suggest that this is not an event for members of the One True Church. The reason it caught my eye was not so much the size of the ad itself but the presence of Kenneth Copeland, the evangelical pastor who responded so enthusiastically to the ecumenical YouTube clip from His Holiness Pope Francis, introduced by the Pope's 'brother bishop' friend Tony Palmer. May his soul rest in peace.

The website claims that the entrance fee to the three-day Earls Court event was just £50 but has been reduced to £20, but for that £20 you can expect some serious 'financial breakthroughs'. Below is a taste of what Londoners who pay money out of their wage packets to attend this event will witness. Morris Cerullo is 'headlining' the event.

Pope Francis has gone to quite some lengths to 'reach out' to these Protestant evangelical communities. My understanding is that the honest janitor is more precious in the sight of God than the dishonest or shrewd millionaire, not because God detests the rich, but because God takes pleasure in those who seek Him and serve Him with an upright heart. I've said before that the 'three pees' message of Pope Francis - 'poverty, prayer and peace' - runs in complete contradiction to the emphases of what Catholics have traditionally understood as protestant heretical sects, whose main attraction seems to be personal enrichment in this life.

I'm at a stage in my 'spiritual journey' where I can watch the below clip and think, 'that is completely, bat*** insane', but obviously many others will be more impressionable and vulnerable to the message of these charismatic figures promising £££s to those who pray hard enough and give them £££s. I believe that God in His providence can and indeed does assist us in our daily needs - we pray 'give us this day our daily bread'. However the idea that if you pray 'in the spirit' enough, God will send you through the financial stratosphere to new levels of financial glory is a rather suspicious and dangerous message.

Call me a pessimist, but I fail to see how 'unity' is to be achieved with communities that actually believe the things believed by the pastors of these 'ecclesial communities', who object to a number - quite a number, indeed - of the holy doctrines held by the One True Church. Obviously, His Holiness takes a quite different view, but for these reasons I have found the 'outreach' to the evangelical protestant communities to be utterly baffling. I'd love to see a Catholic congregation's reaction to a parish priest speaking like this in order to encourage his parishioners to assist in his church restoration fund. Oh, that would go down well! Many parishes would like to be 'raised up into a financial dimension' they have 'never experienced'. Money has, let us be honest, never been a problem for the evangelicals.

When will people wake up to the fact that the love of money is the root of all Protestantism?

I once came across some Brazilian books assuring us that we could acquire a swimming-pool, a new car etc if we prayed the right way. That was in a book-shop in Fatima of all places!

heretics all of them.catholics should avoid such devilment for the sake of their souls.the bishop of rome may go though-he likes that sort of thing.he dislikes traditional catholics!!keep the faith.remember our lady of fatima.god bless. philip johnson

It's easy to sneer, but these ministries are receiving many blessings just now. A family member of mine left the Church a few years ago and prosperity has rained down on her family since beginning a House Church. I still go to Mass but I know she no longer considers me a "real" Christian. I think these people are wrong, yet they appear to receive miracles because they never doubt for one moment that the Lord's favour rests upon them. I almost envy that, even though I think they're in error.

What is so worrying when watching something like this is the rapture and involvement of the audience. From our living rooms we are able to see through the ham acting and dodgy toupee and offer of 'God's financial blessing' but for those present it seems that they are all under his spell.

'Only in America' is a phrase often used and one wonders why they are so gullible. There is a compilation on Youtube I came across some time ago of various extraordinary pieces of American evangelical programmes which can reduce one to tears of laughter and yet they were produced in all seriousness.

I fear Pope Francis will have a job reaching out to these groups. I only hope he does not suggest our Priests imitate them!

Incidentally I see the Earls Court event has been reduced to £20 - £20 too much in my opinion!
In July 1965 I went up to a Catholic Vocations exhibition also held in Earls Court with a group of children from my parish which was described as 'Presenting a World of Opportunity in Faith'. It included a Mass celebrated by Cardinal Heenan - cost for entry? Unless I am mistaken I do not remember there being a charge at all. I wonder how many of the children present there were inspired to follow a vocation and why have there not been any similar vocations exhibitions since in Britain?

Dear Lord, if this is how You treat Your friends, it's a wonder you don't you have more.

The US bishops must be aware that Copeland preaches prosperity hogwash and lives like a king on the dollars of the poor but gullible. Why doesn't some bishop tell Francis what a sleaze he was being photographed with? It's a bloody outrage that this man is seen to be approved by the successor of St. Peter and Christ's Vicar on Earth. Francis has soiled the Papacy (again).

@Patricius. I may have to steal that quote.

I heard that antichrist will work some whammies and wow the crowds too. What it is that they do not doubt is that the favour of their homemade god, will rest on them. If they had an up close and personal with Christ and His Bride they would then have a choice = go with the Truth, with whom 'my' will is probably completely vile, and His will is everything; or go with me, with whom my will is everything and His will is, well, mostly inconvenient.

I'd rather crowd surf at an ACDC concert (do they still do that) than spend five minutes demon-jiving in the name of God with these deliberately fake or wantonly deluded conjurors.

p.s. one wise bloke once said that he didn't pray that God give him an easy life, but he prayed to God to give him the strength to get through whatever God required.

Surely the average buck-a-bang worker has more integrity than these 'missionizers'.

p.s. the possessed guy in the red tie quotes Malachias 3 (specifically 10-11). Those verses refer to people giving the offering tithes to the Lord, in order that they receive blessings (even to abundance) rather than the 'goods' they have be taken away from them through neglect. Haydock's overall exegesis of chapter three is, 'Christ shall come to his temple, and purify the priesthood. They that continue in their evil ways shall be punished: but true penitents (those that give 'tithes') shall receive a blessing.' I guess traditional Catholicism and financial-prosper-protestantism don't have much in common.