Tim Stanley writes a balanced and thoughtful piece today on the American Atheists lawsuit attempting to take away the Cross that stood poignantly as consolation to all those affected by the atrocity of September 11 in New York.

In the article he highlights that...

'Dave Silverman, head of the American Atheists, called the display a breach of the separation between church and state. He said that the cross “has become a Christian icon. It has been blessed by so-called holy men and presented as a reminder that their god, who couldn’t be bothered to stop the Muslim terrorists or prevent 3,000 people from being killed in his name, cared only enough to bestow upon us some rubble that resembles a cross.”'

Interesting. A couple of things stand out from Silverman's comment.  Firstly, the Cross of Christ has been offensive for a long, long time, so it is not surprising that some people would rather it were banished from Ground Zero. It was St Paul who called it a 'stumbling block to the Jews and folly to the Gentiles.' Secondly, quite what God is meant to do when a group of people decide to fly a couple of airliners into very tall buildings is a mystery. The Lord did, after all, and still does, give us all free will to decide between good and evil, life and death. Anyway, it offends him and his atheist friends and so a lawsuit has been filed to have the offending material taken away. 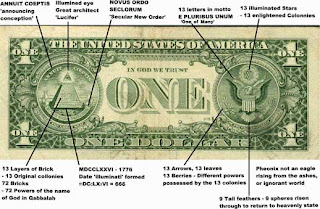 Aside from this however, one wonders whether these 'American Atheists' would like to see the back of the vast and sprawling usage of masonic symbolism in American life.

Such symbolism is there for all to see on the dollar bill, for instance, and I think I am right in thinking that quite a lot of US companies enjoy using such symbolism on their logos and the like.

We should boycott Kraft Foods anyway because of Senomyx which you posted on a while back - yuck.