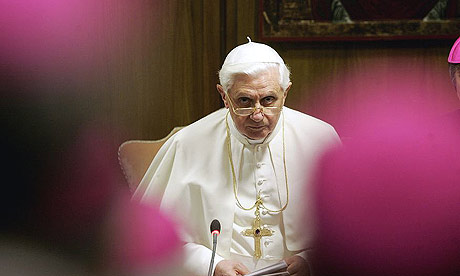 The Telegraph reports today on the Holy Father's interview preceding the publication of his new book, Light of the World. It has been leaped upon by the media, and Catholics of a liberal disposition, as a ground-breaking and seismic shift in the Church's position on artificial contraception. It is anything but.

Pope Benedict XVI's words only serve to underline his pastoral concern for the salvation of souls, his hope for the redemption and the temporal and more profoundly spiritual rescue of the very vulnerable. It amounts to a humble prayer for those in peril, for their discovery of Christ's redeeming love. Here are the words that have caused controversy.

"There may be justified individual cases, for example when a male prostitute uses a condom, where this can be ... a first bit of responsibility, to re-develop the understanding that not everything is permitted and that one may not do everything one wishes," Benedict was quoted as saying.

"But it is not the proper way to deal with the horror of HIV infection." Benedict reiterated that condom use alone would not solve the problem of HIV/AIDS. "More must happen," he said.'

Please note, that the Supreme Pontiff is making it clear that the Church cannot actually expect people who are not living the Church's teaching (for one reason or another), not to use condoms. If they or indeed we, are practically unable or, more importantly, do not wish to live Church teaching in respect to sexuality at all, then you cannot expect these to avoid contraception.

The example he sites is one of self-defence for those working in the sex industry. His pastoral concern is that of preserving the body so that one may save and preserve one's soul.

Pope Paul VI's encyclical 'Humanae Vitae' was written to Catholics (explicitly) and it is written expecting that these Catholics are married. This is the premise on which the Church's teaching on contraception is based. For one who is acting outside of the moral law, to one who is fornicating, to one who is a prostitute, to one who is practising homosexuality, the sin of using artificial contraception becomes somewhat redundant, since the gravity of the first sin itself does not require the addition of another (the use of a rubber barrier) to embellish it.

Sin and the sense of sin, in this area, only really becomes particularly 'active' in married persons who give themselves to each other in Holy Matrimony as ordained by God. In other words, mortal sin in relationship to Chastity is mortal sin.

If you're going to sin mortally (engage in sex outside of marriage of any kind), and act contrary to that which your (informed) Conscience informs you, what difference does it make if you're using 'protection'? Indeed, if you're going to place your soul in jeopardy, a sense of survival in the long term demands that you use 'protection' so that you may hopefully come to repentance.

The Holy Father sees this as, 'a first bit of responsibility, to re-develop the understanding that not everything is permitted and that one may not do everything one wishes'. Please note, that he doesn't condone either the sin (sex, be it homosexual or heterosexual, outside of marriage) or artificial contraception (within marriage), but wishes to lead all to repentance and respect for the sanctity of life and to the great joy to be discovered in Christ's mercy and in His Church. Much like the Father in the Parable of the Prodigal Son, the Church, exemplified by the Pontificate of Pope Benedict, yearns for men and women to run back to the Church, in which is found the fullness of truth. Pope Benedict XVI is one who, seeing Christ's children in so much anguish, runs towards them, proclaiming the generosity and mercy of the One True God!
at November 20, 2010

Theresa of the Villa said...

Again, in an earlier post you did not appear to understand this point but insisted that condoms were evil even if they did protect against HIV in those otherwise not following Natural Law. glad to see you have now understood. All it took was a papal decree. Now if only the pope could fortuitously speak every time you misunderstand a basic point of theology, you would end up being a better Catholic.

Can you quote me, please, instead of just attributing words to me?

First, this was not a Papal decree. Secondly, the link to an earlier post does not prove that Laurence is saying two different things. On the contrary, my reading of both posts tends to underscore consistency.
Thirdly, it's the word "justify" which seems to be causing confusion in agency reports. It's the translation from German to Italian which produces this word. The Pope is usually philosophically nuanced and I wonder if the word has been firmed up. Unfortunately, I don't have German.
However, as I read the reports so far the Pope is not, anywhere, saying that the use of condoms in certain circumstances is morally acceptable or justified.
Only that for a person in grave sin to use a condom may indicate the first glimmering of a sense of moral responsibility.

''However, as I read the reports so far the Pope is not, anywhere, saying that the use of condoms in certain circumstances is morally acceptable or justified.''

Perhaps in a Jesuitical sense you are right but what is clear is that he is saying that the use of condoms in certain circumstances is at least morally preferable to not using them. Of course, using condoms is less morally preferable to abstaining from sex outside marriage altogether but if you cant hold to that ideal, it's better using condoms to prevent disease transmission. Within marriage, it also follows that condoms may be used among HIV sero-discordant couples to prevent disease transmission (with contraception as a secondary unintended effect). Thus the use of condoms in the latter example demonstrates logically that their use may be morally acceptable and therefore perissable in some circumstances.