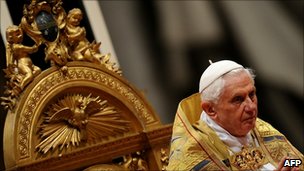 BBC has the full excerpt of the interview with the Holy Father which discusses the Church's position on the use of condoms.

Peter Seewald: "On the occasion of your trip to Africa in March 2009, the Vatican's policy on Aids once again became the target of media criticism. Twenty-five percent of all Aids victims around the world today are treated in Catholic facilities. In some countries, such as Lesotho, for example, the statistic is 40 percent. In Africa you stated that the Church's traditional teaching has proven to be the only sure way to stop the spread of HIV. Critics, including critics from the Church's own ranks, object that it is madness to forbid a high-risk population to use condoms."

Pope Benedict: "The media coverage completely ignored the rest of the trip to Africa on account of a single statement. Someone had asked me why the Catholic Church adopts an unrealistic and ineffective position on Aids. At that point, I really felt that I was being provoked, because the Church does more than anyone else. And I stand by that claim."

"Because she is the only institution that assists people up close and concretely, with prevention, education, help, counsel, and accompaniment. And because she is second to none in treating so many Aids victims, especially children with Aids."

"I had the chance to visit one of these wards and to speak with the patients. That was the real answer: The Church does more than anyone else, because she does not speak from the tribunal of the newspapers, but helps her brothers and sisters where they are actually suffering."

"In my remarks I was not making a general statement about the condom issue, but merely said, and this is what caused such great offense, that we cannot solve the problem by distributing condoms. Much more needs to be done. We must stand close to the people, we must guide and help them; and we must do this both before and after they contract the disease."

"As a matter of fact, you know, people can get condoms when they want them anyway. But this just goes to show that condoms alone do not resolve the question itself. More needs to happen. Meanwhile, the secular realm itself has developed the so-called ABC Theory: Abstinence-Be Faithful-Condom, where the condom is understood only as a last resort, when the other two points fail to work."

"This means that the sheer fixation on the condom implies a banalization of sexuality, which, after all, is precisely the dangerous source of the attitude of no longer seeing sexuality as the expression of love, but only a sort of drug that people administer to themselves. This is why the fight against the banalization of sexuality is also a part of the struggle to ensure that sexuality is treated as a positive value and to enable it to have a positive effect on the whole of man's being."

"There may be a basis in the case of some individuals, as perhaps when a male prostitute uses a condom, where this can be a first step in the direction of a moralization, a first assumption of responsibility, on the way toward recovering an awareness that not everything is allowed and that one cannot do whatever one wants. But it is not really the way to deal with the evil of HIV infection."

"That can really lie only in a humanization of sexuality."

Peter Seewald: "Are you saying, then, that the Catholic Church is actually not opposed in principle to the use of condoms?"

Pope Benedict: "She of course does not regard it as a real or moral solution, but, in this or that case, there can be nonetheless, in the intention of reducing the risk of infection, a first step in a movement toward a different way, a more human way, of living sexuality."

Light of the World is to be published in English on Tuesday and available for general release from Wednesday. To order a copy of the book, or for more information, please contact the Catholic Truth Society.

Yup, some punk at the Vatican has dropped the Pope in it again.
Unless, of course, someone in the author's publicity machine "sexed it up" in order to promote the book. It has been known.
Context is all.

I would have ordered the book to see the latest on B16. But with all this media hoopla, which I view as a publicity ploy, forgetaboutit. I refuse to promote the foolishness.
Why don't you write a book about how the media knowingly misconstrues, just to sell? You'd be perfect for the job.

Theresa of the Villa said...

The Pope doesn't get 'dropped in it', he knows exactly what he is doing. Thankfully, he has chosen to indicate to the millions of faithful who did not agree with some of the sillier elements of the condom teaching that had been whipped up int he minds of un-official commentators (but, we must note, not the Church hierarchy itself, at least in this country, who were publically cool on the matter). Fantastic! We love benedict, whose wisdom and courage to speak out in support of condoms as part of the strategy to combat HIV is finally shown to the world.