The Default Setting of Society is Eugenic 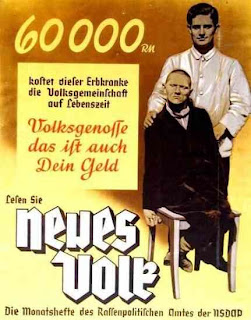 Ed West has written a piece on eugenics, labelling it a creation of the 'left' rather than the 'right' in his piece, 'Eugenics is not right wing', written in the wake of Lord Howard Flight's remarks that the poor need to stop 'breeding', or something such like. Hatred of the poor and the weak is not a 'left'-'right' discourse. It is a human discourse.

Eugenics is still around, it never went away, having received a bad reputation when millions of Jews, mentally handicapped, homosexuals and brown-haired 'non-aryans' were exterminated by the Nazi regime. It didn't go away, just moved on and called itself something else. Ed is right to draw attention to one of its disguises in 'family planning'.

Of course, it is true to say that eugenics is a danger when a society disregards the sacred and worships the profane, but the Old Testament and New Testament bear a true witness to societies that were inherently eugenic. The early Christians were famed for rescuing newly born, unwanted or malformed children from hilltops where they had been left for exposure to die because such children were seen as a 'curse'. Eugenics is as old as sin. It has always been insidious, so subtle that people don't recognise the evil for what it is until it is too late.

From the Epistle of St James...

'My brethren, have not the faith of our Lord Jesus Christ of glory with respect of persons. For if there shall come into your assembly a man having a golden ring, in fine apparel, and there shall come in also a poor man in mean attire and you have respect to him that is clothed with the fine apparel, and shall say to him: Sit thou here well; but say to the poor man: Stand thou there, or sit under my footstool: Do you not judge within yourselves, and are become judges of unjust thoughts?

Hearken, my dearest brethren: hath not God chosen the poor in this world, rich in faith, and heirs of the kingdom which God hath promised to them that love him. But you have dishonoured the poor man. Do not the rich oppress you by might? and do not they draw you before the judgment seats? Do not they blaspheme the good name that is invoked upon you? If then you fulfill the royal law, according to the scriptures, thou shalt love thy neighbour as thyself; you do well.  But if you have respect to persons, you commit sin, being reproved by the law as transgressors. And whosoever shall keep the whole law, but offend in one point, is become guilty of all.'

The Apostles wouldn't have condemned the persecution of the poor and voiceless as 'eugenics', but would have just recognised a society's wicked trend towards despising the poor, lame, sick, orphans, elderly and widows for what it was - sin. The Epistle of St James reminds us that the default setting of society, of all of us, is eugenic - the default setting is one of blindness, pride and self-aggrandisement of the strong at the expense of the weak, crucified and vulnerable. It is true to say that eugenics is what happens when societies forget that God defends and upholds the poor, but societies, both 'then' and 'now' have always forgotten both God and His poor. The Beatitudes are an inversion of what the World recognises to be success and what the World recognises as glory. Christ reminds us that what we do, or do not do for, the poor, has been done, or not, for and to Him.
at November 26, 2010

Eugenics were quite specifically at the roots of the abortion industry, both in the UK (Marie Stopes) and the US (Margaret Sanger).

Marie Stopes, for example, was a life fellow of the Eugenics Education Society: see http://www.whycatholic.co.uk/txt/abortion6.html.

Both women had views that were repugnant, but both are still held up by the abortion providers as model women of their age.