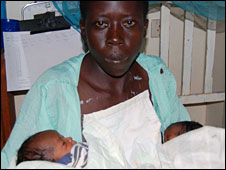 Mothers in Kenya have marked Barack Obama's historic win in the US presidential elections by naming their newborns after him and his wife.

More than half of the babies born in a Kisumu Hospital on the day after the election were named either Barack or Michelle Obama.

Kisumu is close to the village where Mr Obama's father was born and raised and Mr Obama is a local hero.

The region erupted in celebration after he won the race for the White House.

Out of 15 babies born in the New Nyanza Provincial Hospital in the western city of Kisumu on Wednesday, five boys were named Barack Obama and three girls were called Michelle.

God bless Barack Hussein Obama, newly elected President of the United States. Give him wisdom and prudence in governing and above all, respect for the sanctity and dignity of all human life, from conception to death.