The Unofficial Magisterium of Pope Francis


It is still an 'unofficial interpretation" of the Pope's confusing Magisterium, but thankfully Cardinal Schonborn has this confusion covered, along with Fr Thomas Rosica, Austen Ivereigh, Fr Antonio Spadaro and a glittering array of thugs, acolytes and cheerleaders for the demolition of the Church via a proxy war on Her teachings.

Unlikely, perhaps, that 'Schonborn the Orthodox' who has developed a greater distaste for sound doctrine over the years will hear it, but let us face facts, if such men will not hear Our Lord Jesus Christ and Cardinals loyal to Him, there is little hope songs will be heard with a sympathetic ear. We know that the dubia, a set of just five questions, was, "absolutely inconvenient". Cardinal Schonborn himself has described it as such.  I suppose that Catholic Truth and those who speak it will continue to be considered "absolutely inconvenient", be the speakers Cardinals, Bishops, Priests or laity, until it is proclaimed without distortion once more from the summit of the Church.

It would be fun to watch Schonborn 'interpreting Leo XIV through Francis' after the edict suppressing the Jesuits has gone out and priests need permission from Ecclesia Dei to celebrate the Novus Ordo. We would need some light relief after this papacy. I am already crafting my application to be Pope Leo XIV's official Court jester. In the meantime I'll continue teaching English as a foreign language.

God bless Pope Benedict XVI, the great, the good! May the soul of the Cardinal Meisner, the heroic Shepherd so loyal to Christ, rest in peace. May the triumph of the Immaculate Heart come soon. What an inconvenience that will be to many!

What a fruitless and pathetic undertaking the great project now being implemented in Rome shall be in the sight of God and man one day and how worthless the great efforts to build the new Church shall be when the builders are confounded by the Lord.  However far they get, they will eventually have to leave their Tower of Babel unfinished. And then will come their reward. Yes, it is a greater use of a man's time to compose new lyrics to tawdry songs than it is to be a member of the construction team of the Bergoglian enterprise, bound to come crashing down around their ears, however magnificent the building appears at first!

May our God bless all readers with the hope and courage to be faithful to Jesus Christ in the great trial ahead. If Cardinal Schonborn ever reads this, that includes you. Yes. Until the end, I am sure that those who you dismiss as an "absolute inconvenience", especially the dubia Cardinals, are praying like so many are, that misled Cardinals and Bishops and all the men flocking like vultures over the torn Body which is Christ's Church, will renounce their misplaced loyalties and hold fast to the sound teachings which they currently despise. May God help those faithful to Him to love you and continue to beg God for the end of the crisis in the Church! Viva Cristo Rey! Long live Jesus Christ our Lord and King! 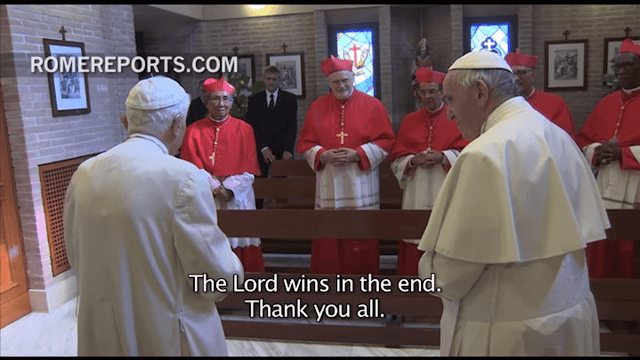 I see (reported in the Catholic Herald), that Cardinal Schoenborn stated on a recent visit to Ireland: “Today, everybody can get married.” Oh yes indeed, everybody: and one wonders whether he gave a knowing wink as he said it.

He also claimed that 'his great-grandmother, a wealthy widow who lived in what today is the Czech Republic but then was part of the Austrian empire, had six servants who remained unmarried because of laws against marriage for people of their status. “Marriage was a privilege,” he said.'

One wonders at the journalists who print this sort of guff without thought or question.

Schoenborn was born in 1945. Assuming, very conservatively, that each previous generation of women in his matrilineal family line conceived not before the age of 30 (though that would be an unusually advanced age for the time) that would take his widowed great-grandmother back to being a widowed estate-manager no earlier than the 1880s, and her unfortunate 'servants' being forbidden from marrying in that and subsequent decades.

Yet the Austrian law allowing 'Leibeigenschaft' (the ownership of servants as property, who were not allowed to marry without permission from their master/mistress) had been abolished in the lands of Bohemia, Moravia and Silesia by Emperor Joseph II on the November 1st 1781 - a full hundred years or more before the good Cardinal's great-grandmother would have been running the Bohemian family estate as a 'wealthy widow'. (All residual employment restrictions on servants had been swept away by a further liberalisation in 1848.)

Even before 1781, there was no 'law' that actually *did not allow* servants to marry - they simply had to ask their employer's permission: and that was a hundred years before the Cardinal's anecdotal great-grandmother. If she did not 'allow' her servants to marry, that was a frolic of her own devising, certainly not any law past or present. Perhaps she was pretending to the servants for her own greater convenience that serfdom had never been abolished in the Danube Monarchy, and hoping they'd never find her out. But then, highhandedly pulling rank, shouldering the facts aside, and later distorting them in hindsight, may well be inherited Schoenborn family traits :-)

Btw, it was in 1782 - one year after passing this enlightened law granting freedom to all his subjects, that Joseph II passed a further law, suppressing the Jesuit Order in Austria.

There were 3 M Catholic Cardinals in Germany, Meisner, Marx and Müller.....now there's only one. Long live Pope Benedict the Great, God bless him. Der Graf von Schönborn.....waiting for his last coming out.

Thank you for looking into the facts.

Someone should really tell his eminence that a tall tale should at least have the remote possibility of being true. (Huckleberry Finn called them "stretchers", because they only "stretch" the truth a little).

This tall tale reminds me of the politician's wife (born in 1947) who claimed she was named after Sir Edmund Hillary (famous climbing Mt. Everest in 1953).

Thanks, indeed! But attention to 'Josephinism' would suggest not too many cheers for that Kaiser are in order, or at least a very mixed bag of cheers and boos.

I would strongly recommend Gustav Schnürer, Katholische Kirche und Kultur im 18. Jahrhundert (Paderborn, 1941), for the whole century - unfortunately never translated into English as far as I can discover, but would gladly learn of other good (English-language) resources.