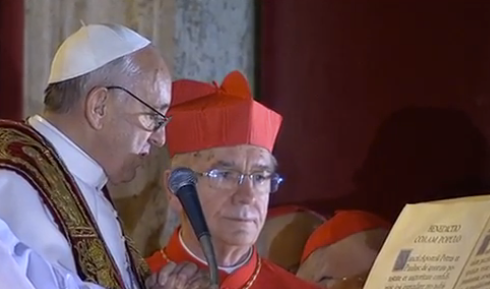 'The pope could be wounded [were he not a living Saint] by the motives [referring hearers not to the questions but to the motives themselves, which he hereby casts as suspect'] which led these four persons to go so far [they are extreme/extremists] as to want to [they are not doing this out of duty but out of disobedient self-will] correct him [how dare they!!!?]. But, he is very calm, relaxed, and moves forward [our leader is strong and fearless in the face of this outrage]. He knows which is the right path [he is so wise he is beyond questioning by a competent authority] that one has to [he and we are obliged to] follow. And the College of Cardinals is with him, without any larger problems [he has overwhelming, total support among the Cardinals]. The whole College of Cardinals is with him [he has overwhelming, total support among the Cardinals. It is necessary to repeat this because that's the message he wants to get through, even though he can provide no evidence for this].'
at November 29, 2016

Cardinal Hummes says, "The whole College of Cardinals is with him [he has overwhelming, total support among the Cardinals."

Either words have different meanings in Brazilian Portuguese, or His Eminence doesn't care about the truth. Because, while they may be a minority, it is clear that some orthodox cardinals are not following Borgoglio's heresies.

Hummes at 82 can't vote in conclave. Frank the hippie pope is 80 this December. These men are the generation that destroyed the Church.

Team B Shows Its Muscle said...

Due to sodomite/pederasty perversion and cover ups (including financial misdealings--hiding assets etc.), the majority of the hierarchy is subject to blackmail by the Pope, since they reported everything to him and often acted at his behest. Take Vigano, the pope's nuncio to US. He no doubt acted at the Vatican's orders, and then when Bergoglio wanted to "get (rid of) him: since he arranged meeting w/Kim Davis, he ordered his hatchet men in the diocese to release the info. Then they get two birds w/one stone. Hummes is no doubt playing bouncer/ enforcer to Bergoglio.

I agree with John.These hippy apologies for Catholics are responsible for the horrors of the Vatican 11 mentality which,sadly ,is still with us.The fight is on and these heretics will get what is due them by Divine intervention in Gods good time.I am fed up with Bergoglios inane pathetic diatribes about his 1960s hippy talk of -encounter,and meet people where they are!Lord rid us of this pestilence soon.