Pope Francis Shows Why Christianity Will Always Be Relevant 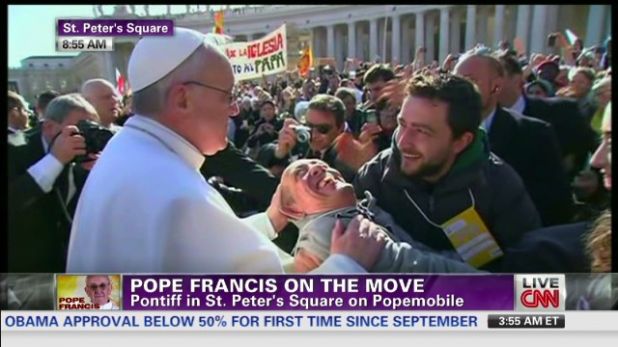 I missed the inauguration of Pope Francis yesterday because of work commitments. I've read a bit about it (apparently the liturgy was actually rather reverent and good). However, one image in particular of the Pontiff's inauguration serves to remind us just what it is that will always make Christianity relevant in 'the public square'.

This reminder, indeed, was served, in St Peter's Square. The World in general is ready to cast off 'the least' of Christ's brethren as an economic and societal burden. The Church, since its very beginnings, has put the society in which it resides to shame because of Her members care for those whose humanity has been forgotten. The first Christians would recover the infants left to die from exposure atop hills because the children were deemed unfit for human purpose.

Today, a new report gives us ample more evidence that we are becoming a society willing to sacrifice weak and dependent human life for economic 'necessity'. Pope Francis's descent from the Popemobile to bless a severely disabled man was touching not just because he has decided to make a special effort to reach out and bless 'one of the least' of Christ's brethren, but because the World around Francis is fast becoming one that disregards entirely the humanity of the mentally and physically disabled. This moment, captured on camera is not just 'great PR' for the Church at a time when She is ridden by sexual scandal. It is also 'bad PR' for a society that finds the disabled to be some kind of burden on the rest of 'fit for purpose' society.

The more that Christianity is pushed from the public sphere and the more it is forced to retreat, the more human beings are seen as commodities to be farmed for economic purpose.

The more Christianity disappears, the less value society places on humanity as a whole. Today we also hear from David Cameron that even motherhood, a distinguished vocation, is not respected or valued unless a mother is working also - thus we see the human person reduced to someone who is either 'productive' in a capitalist sense, or 'unproductive' in a capitalist sense. No wonder the Government wishes to reduce Christianity to something people do in private on Sundays (assuming that they do not work in a field that forces them to work on Sundays!)

What Pope Benedict XVI warned us of in the UK is, in fact, happening already. A new report resulting from a three-year study reported on today by The Telegraph makes it clear that doctors put a lower value on the lives of the disabled, mentally or physically and are more likely to 'allow a patient to die' if they suffer disability.

While modern Western society prizes such concepts as 'equality' and 'tolerance' highly, actual ethical concepts upon which Western civilization is built such as 'compassion' and 'dignity' and 'Christian love' are being rejected, forgotten or totally misunderstood. It makes sense that a society that rejects Christ will reject, too, 'the least' of his 'brethren'. The Kingdom of God is not the same as the kingdom of man. The Kingdom of God values people not on their economic worth, nor their salary or spending power, but their worth as creatures made in God's image and likeness. All of the things treasured by modern earthly rulers are overturned and stood on their head by the Cross.

Of course, atheists will say that Christianity does not have the monopoly on compassion and love. This is true of course. You simply don't need to be a Christian to 'have a heart' and to care for others. It is just that at the heart of atheism is not one sound teaching that points to the love of our neighbour for either God's or our neighbour's own sake. In terms of teaching, atheism is a dangerous void that lacks any firm teaching on love.

The only kind of love that atheism seems to recognise in contemporary society is sexual love, or eros. This seems to be its main preoccupation. Caritas - love of a higher order and nature - does not feature greatly in atheism's great plan for society. This is why the more Christianity retreats from the public sphere, the less caritas there is to go around. The contemporary vision of human society - without Christianity - is exclusive - not 'inclusive'. The truth is that you are included in the contemporary vision of society until your 'best before date'. Once you've passed your 'best before date', you are thrown out, discarded and forgotten. This is true for the poor, true for the homeless, true for the elderly, true for the disabled and has, for years, been true for the unborn. The more a society tries to make Christianity less relevant, the more relevant does Christianity become.

May God bless Pope Francis, increase our hope, increase our faith and make our lives ones that manifest charity, especially for the least of Christ's brethren, so despised by the World, but so precious to Him.
at March 20, 2013

Thank you for this very fine, positive article.

A question: why aren't you writing for the Catholic Herald? Perhaps you are!

Mentally and physically disabled peopled are currently being scapegoated in so many ways here in the UK - by the government, media, and society. I, for one, was therefore grateful to see the Pope reaching out to the disabled man in the congregation.

This piece radiated truth on every level. Thank you!

I do object to the policy that encourges the idea that a mother should be out working rather than being at home to look after the children. The problem is that so much of our society is geared to making it impossible for a mother to stay at home and the changes needed are very difficult to implement.