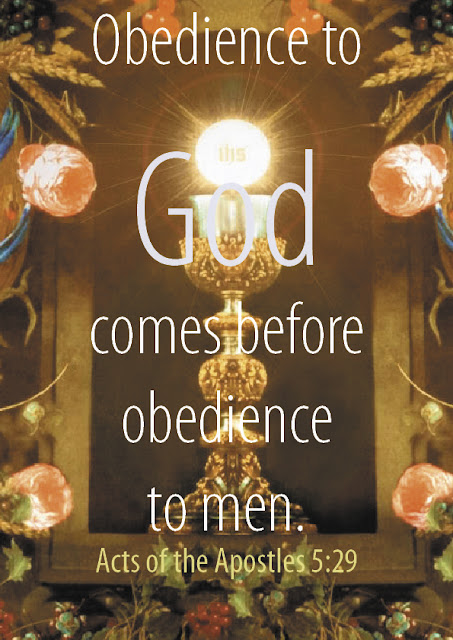 Let us implore for God's help and protection of all Catholic priests in Malta, who believe, quite rightly, that they are custodians of the Most Holy Sacrament of the Altar and implore Christ,
Our Blessed Lady and the Saints that the Bishops of Malta and Gozo
will reverse their terrible decision and repent of their apostasy.

For there is no other word for it.

Neither is there justification to be found anywhere in the Catholic Faith for it.

The Times of Malta covers the story that one of the Bishops has said...

"I am saddened by the reaction from certain quarters and invite priests who have concerns to come forward and discuss them directly with us."

Are priests concerned? Oh yes! As well they should be, since this is not only a dereliction of the Bishops' duty to teach the Apostolic Faith, not only a diabolical invitation to commit sacrilege issued to the entire Catholic nation of Malta, but an astonishing violation of the sacred conscience of every Catholic priest in Malta. And there are many of them!

May they follow their conscience and resist this directive from the Bishops of Malta and Gozo and may Christ the Lord, His Blessed Mother and the Martyrs who died for the defence of marriage and the Most Holy Eucharist intercede for them.

The Bishops have made a statement and placed it into the public domain which makes their apostasy from the Faith official. They have done this publicly. How dare they try to restrain priests from directly and publicly opposing them, how dare seek to coerce Maltese Priests to seek their collaboration, when they have publicly dumped their priests into a conflict between following Christ and following them?

They wish for compliance and obedience simply because of their rank. May they be met with the public, stern opposition they deserve. They have endorsed sacrilege in a public manner. How dare they even hope that they will not be criticised in the manner in which they have done so: publicly?! Every priest in Malta who loves and desires to see respected and honoured the Most Holy Sacrament, who prays that Jesus Christ is never violated in such manner as the Bishops endorse, who do not wish death for the sinner, but that the sinner may find Life Eternal, now finds himself in the position to choose to follow the Bishop's request or defend Jesus Christ our Lord and the souls placed in their care. May they not be cowed into silence or acquiescence by these cowardly Bishops who have volunteered to place themselves on the path to eternal perdition. May they be granted the courage necessary and support from the laity and their confreres which they merit and deserve.

The Maltese Bishops may be "saddened" that priests are publicly demanding that this decision be reversed and that they revoke their document, but they seem to think nothing of the crushing of the consciences of their priests, over whom they are set in authority and who are in their care, who they are meant to themselves protect with paternal love and great prudence. That is, for those priests, not simply "saddening" but leaves them most assuredly with the bitter taste of abject betrayal by those placed over them because that is precisely what it is. Sacrilege brings spiritual death to the one who commits it. Apostasy brings spiritual death and brings down the just anger of God upon the one who commits it! 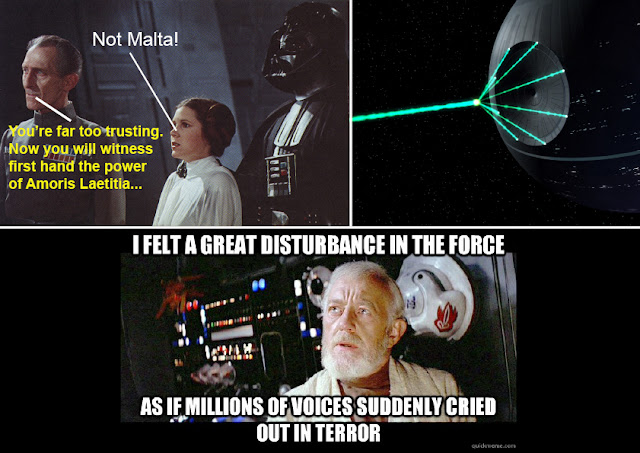 'Silence' is a best-selling book and a flop of a Hollywood film. It has no place in the Catholic Church. If the Bishops had wanted 'silence' they should have thought twice about publicly declaring themselves to be sworn agents of the Devil, declaring themselves anti-Christ. They may protest about such language, but they cannot be pro-sacrilege and for Christ. They cannot serve Christ and His adversary and say they are for Christ. They have chosen, in a public and brazen manner to set out their stall. In a public manner, may they be opposed and in a public manner, may they revoke their outrageous decision. They cannot declare war on the consciences of their priests and upon their very ministry to the Faithful and request silence after the declaration. These Bishops need to be told publicly...

How dare you discard with such merciless ease the consciences of the Priests in your care and as an afterthought, request silence on their part!?

How dare you invite the Faithful to commit sacrilege!?

Have you no fear of God at all!?

You did not consult with the clergy on this matter before you went ahead and published this vile, blasphemous document and now you want your clergy to consult with you concerning its implementation?

What world do these Bishops inhabit?

You are prepared to lose your souls.

Have you both lost your minds also!

It's amazing how there are any faithful priests left after 50 years of this lying sodomite gang. Many bloggers are calling them "nazis," but see Genesis 19:4-5 and Judges 19:22 for the fathers of these rapacious lions who prowl around seeking whom they may devour.

PS They don't even have recourse to Rome--since, of course, Pope Francis (and sodomite Team B) is the chief apostate.

Implementation of the document is easy - depending on the grade and quality of paper, it can be implemented as toilet paper, lining bird cages, or if sufficiently dense, it can be used to protect from paint spills while remodeling.

Is there any truth in the item on LifeSite news which says that the Vatican is going to issue a stamp comemmorating Martin Luther? Please tell me it is a joke.

I have not been able to find any reference to it on the Vatican Post site and since giving up my column in a Philatelic magazine I no longer receive updates on their new issues. (My husband used to tell me I had another letter from the Pope when they used to arrive on the door mat!)

Oh dear. And there was an earthquake in Rome today!

I wonder if the true problem might be that so many bishops today are not really consecrated, as they are simply too young and imperfectly catechized when they take their episcopal vows: they don't really know what they are doing. They say they're going to be faithful to the Church's teaching forever, but they have no real conception of what this might involve...
;-)

Btw, Bones, if I may offer you another epithet for The Little Book: 'Parked Christians!'
As in last Tuesday's homily: “Lazy Christians, Christians who do not have the will to go forward, Christians who don’t fight to make things change, new things, the things that would do good for everyone, if these things would change. They are lazy, “parked” Christians: they have found in the Church a good place to park. And when I say Christians, I’m talking about laity, priests, bishops… Everyone. But there are parked Christians! For them the Church is a parking place that protects life..."

An extraordinary tirade. I particularly liked: "And when I say Christians, I’m talking about laity, priests, bishops… Everyone."

I'd say that's very near the edge of unreason.

Thank you so much for your strong voice for the Faith. I don't know how to contact these bishops to send them a 'tweet' or email, but I want to. I try to send one or two tweets a week to HH Francis, on his current topic, just to let him know that some of us are on to his program. I would do the same for these players if I knew an address.
I prayed for years that men would take up the defense of the Church. In my youth it was people like my Mom and her friends. ;-) I know it is slow in coming (I've been a 'trad' for 30+ years!) but I am so happy to see men such as yourself, unafraid to take a stand for Our Lord! To me it is a sign of favor and perhaps slowly we will see things change for the better, if we are not too resistant.
God bless you, Laurence!
And, yes. 'parked Christians' certainly belongs in the Little Book.