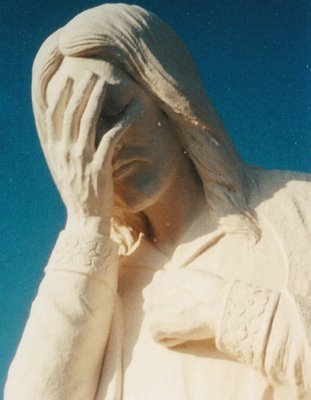 A few days ago I read the prophecies of la Salette. I think I will read them again.

The "prophecies" of an insider made in 1969 and reported by Randy Engel of the U.S. Coalition for Life are also quite impressive:
Blending all religions...old religions will have to go... page 9

and page 29:
R.E: Yes, and as a so-called helping professional your ability to say that is very interesting. The other factor is this whole factor of religion, and he was talking basically about a religion without dogma, a religion that would have a little bit from all the other traditional religions so no one would really feel uncomfortable, and he said, rather
condescendingly, some people need this and if they need it we'll manufacture something that they need. But of course it can't be anything that would declare anything that were moral absolutes or the natural law. Which means that the main target of this group of controllers of course,
was and is the Roman Catholic Church and he mentioned the Roman Catholic Church specifically.
D.L.D: Religion's important because it is eternal and we... people who would follow the church will not buy our rules about change. But if we make our own religion, if we
define what is religion then we can change it as it suits us. Yes, the Roman Catholic Church... I was kind of flattered sitting here as a catholic, hearing it pointed out that the church is the one obstacle that, he said, 'We have to change
that. And once the Roman Catholic Church falls, the rest of Christianity will fall easily".
R.E: I notice that, as the conversation went on, he said,
"Now you may think Churches will stand in the way, but I want to tell you that they will HELP us", and he didn't say they will help us, all except the Roman Catholic
Church... he said, "They will help us", and unfortunately...
D.L.D: He was right.

I was reading this story this morning. Sister Teresa: 'the moment this life turns sacrificial…Then it's my duty to abandon it.'

I wonder what the Pope would make of her. Strange things are afoot in the church.

There's a great line in that BBC article where it says:

"Followers of her movement, Proces Constituent, which has signed up around 50,000 Catalans this year, are mainly non-believing leftists."

Not always a bad thing.