The Sun of Justice 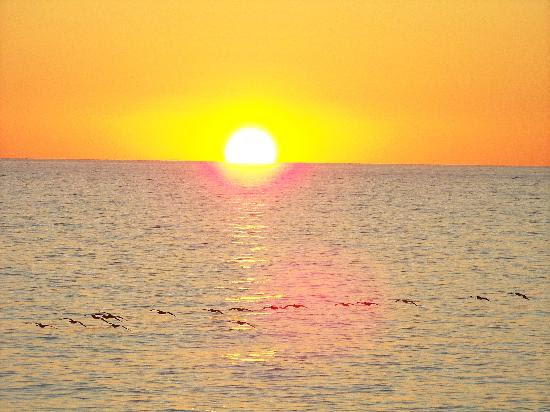 'He hath set his tabernacle in the sun: and he cometh forth as a bridegroom from his chamber.'


It is not hard to see why previous civilisations regarded the sun as a god of some kind. The sun is benign, gives us light and heat, warmth and, as yet, has done no harm to us (apart from some forest fires, but you can hardly blame the sun for that).

On the south coast recently (yes, I was in Seaford), I saw the most dramatic sunset I have seen in years. The few people dotted around Seaford Head were mesmerised, literally gawping at the stunning beauty of the sun, raised aloft as if in benediction over us.

I'll try to explain just why this sunset felt so special. I could veer into Tina Beattie territory, so I'll be careful. There was a perfect sheet of cloud dividing the horizon of the sea from the sky. The sun was obviously behind the sheet of cloud already forming stunning pinks, blues, oranges and different hues among the white grey of the clouds, until suddenly, from out of the bottom of the sheet came the bottom of the sun. It dropped further and further until as a shining disc it appeared in full. Nothing I say can do its beauty justice. It then dropped further and further until (yes, you guessed it) it melted into the sea, until finally, the reflection of the sun on the English coastline started to shine around the sun as it appeared to plunge into the sea, and then its reflection drew towards us onlookers, closer and closer and closer until finally it shone a beam upon the water pointed right at whoever was looking at it. I felt rather privileged to have seen it and said a little prayer to the Lord in thanks for this beautiful event.

No wonder, then, that previous civilisations accorded to the Sun divine qualities or even some form of 'god-head' status. It is often said that in the Catholic religion, motifs of ancient religions find their true place or are incorporated as if, somehow, previous religions find their fulfilment in Christ. A title of Our Blessed Lord is the 'Sun of Justice'. Our Lady is known as the 'Star of the Sea' and 'Mirror of Justice'. The earliest records of Christianity point to the Early Church being orientated to where the Sun rises, in the East. Christ will come in Glory from the East and so Churches and Altars and Churches were orientated towards the Lord who will come in power from the East. This is something pointed out by no less than the reigning Pontiff, His Holiness Pope Benedict XVI.

So it is then that the Blessed Sacrament comes to us rising in the hands of the Priest, held aloft over us. We kneel down, as previous generations would have knelt down before the majesty of the sun, but we now kneel before the Majesty of the Sun of Justice, who enlightens us, heals us and warms us with His Divine Love.

The Priest, who has turned from the East has raised the Blessed Host which has been consecrated by the holy words of institution. He then turns around as the Sun of Justice rises up from the East and turns towards the West, before approaching the Faithful, who are need of Christ, the true Light, the true Lover of our souls, as the Sun of Justice then is plunged into our mouths as He disappears from sight into the oceans of our souls.

At this point, the setting of the Sun of Justice produces within souls the blazing sunset of His Love as the Sun of Justice into the oceans of the Faithful's souls melts and the rich beam chases towards our interior life. His shaft of His light chases across the ocean, reaching into the hearts of each of those who were once onlookers upon the Sun of Justice and Mercy and these souls pray that they may co-operate with His grace to perform, if not spectacular acts of heroism, then the love of God and neighbour, the glory and splendour of a resplendent and beautiful soul - a glorious and beautiful Christian life - a good and holy death.

'From the rising up of the sun unto the going down of the same: the name of the Lord is worthy to be praised.'
at February 19, 2013