Searching for the Authentic 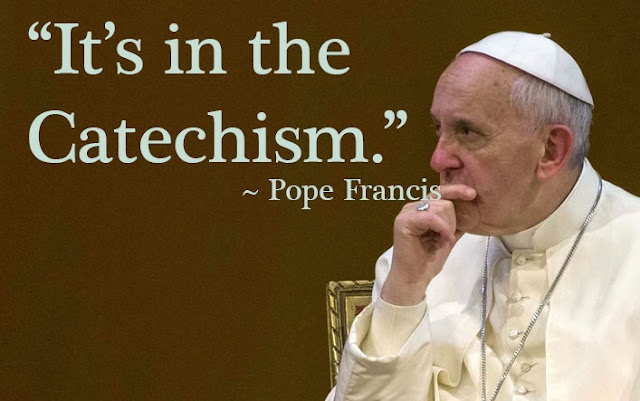 With these words Pope Francis offered to an Italian journalist on the way back from Mexico an answer to the searingly hot political potato of just how Catholic parliamentarians should vote on the 'civil union' bill.

The questions posed by the journalist were as follows:

Is this document of 2003 still in effect?

What is the position a Catholic parliamentarian must take?


In what has to be one of the most agonizingly neutral statements to have come from the mouth of any bishop on this subject - and let's face it there have been a few - the Bishop of Rome said the following:

"I do not remember that 2003 document from the Congregation of the Doctrine of the Faith, but every Catholic parliamentarian must vote according their well-formed conscience. I would say only this. I think it is sufficient. … With regard to persons of the same sex, I repeat what I said on the trip to Rio di Janeiro. It is in the Catechism of the Catholic Church".


Into this one paragraph you can distill this - to put it mildly - very frustrating papacy.

It's a real shame, in fact, if His Holiness does not 'remember' the 13-year-old document on homosexual unions because he would have benefitted from reading it in his defense of natural marriage in Buenos Aires when a similar law was proposed - and likewise passed - in his native land. A refresher reading might have been a good idea for all Catholic Bishops - including himself - who Christ has charged with defending and proclaiming the Truth for the Salvation of souls, even in Italy, yea, even in terms of the debates in the Italian parliament which will either seriously wound or seriously strengthen marriage, an issue over which St John the Baptist and our own St Thomas More, were both prepared to die.

Unfortunately, as evidenced by his public interventions in this issue in his native land, the then Cardinal Bergoglio and now Pope Francis does not appreciate that many Catholic parliamentarians do not seem to have a 'well-formed' consciences, that is to say that such moral cowardice and confusion exists in the arena of human sexuality that Catholic politicians will gladly sell their own souls in order to appease powerful forces within society, within government and within themselves.

In fact, in terms of forming consciences - or rather - informing consciences - you would think that the Supreme Pontiff of the Catholic Church might be in rather a good position to assist in this delicate matter, in public, by proclaiming the Truth on this matter for all his hearers. 'It's in the Catechism' is hardly a ringing exhortation to read the Catechism, or to educate his hearers in it. 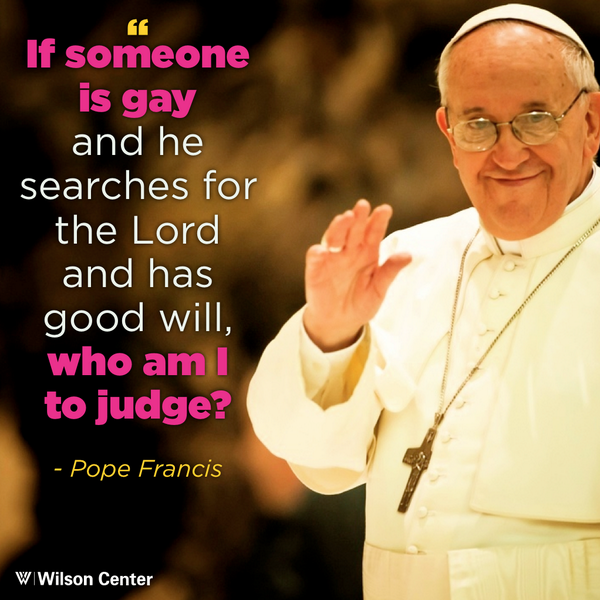 Yep. We're back there again. How? We're back there again despite the fact that His Holiness has rather unhelpfully implied that the issue of how a Catholic parliamentarian must vote on the issue of same-sex unions can be conflated with issue of sexual orientation being no hindrance for a human being in his search for the Lord. And, what His Holiness said in Rio di Janeiro was in direct response to a question about Mgr Ricca. Why is he doing this? Is this because His Holiness just wants to kill this question or because His Holiness is himself confused over this matter? Or can he not answer simple questions with simple answers? The mystery deepens.

And yet, the questions. They were largely good questions and the Italian journalist's question was pretty good. It gave His Holiness an exemplary opportunity to give an account of the Catholic position on same-sex unions with a worldwide audience. Such a popular Pope's words could have, perhaps done much to help to kill the bill that passed yesterday, but then popularity is a bit like riches. You don't become materially rich by giving your wealth away to the poor and you don't become popular or remain popular by telling people the unpalatable truth. Journalists ask the questions and they want answers but despite their rabid reputations they have a right to an answer - a Catholic answer - especially from the Pope and they have a right to the Catholic answer - not obfuscation, or an answer that is no answer at all  - not an answer that says, quite patently, 'Quite honestly, I am embarrassed by the teachings Christ and His Catholic Church, but if you want to know what it is it is in the Catechism.'

Finally, clearly mentally confused, His Holiness is actually wrong in his final assertion that the answer to either the first or second question of the journalist is 'in the Catechism of the Catholic Church'. It isn't. The questions were on how Catholic parliamentarians should vote. The answer to that is not in the Catechism. It is, in fact, to be found in the 2003 document from the CDF that His Holiness 'does not remember' and dismissed out of hand. How a Catholic parliamentarian should vote on this issue, Your Holiness, was one of the very good reasons that the 2003 CDF document was issued. It was like an 'update' to the Catechism because the Catechism did not deal with this critical question. As a Catholic, I'm so sorry for Italy and for you - and indeed for the World - that that document just seemed to 'pass you by'. As a Bishop, as a Cardinal, as a Pope, it is, in fact, your duty to be thoroughly briefed on verdicts that the CDF reach and give on matters of the day. If a proportion of the laity know what that document said - and you do not 'remember' it - then that should be a cause for concern for you - and for all under your care. I must say this looks very exciting indeed!

Fr Serafino will be leading a Lenten day of prayer, including Adoration of our Eucharistic Love with two talks on the mortal combat that Catholics must undergo against the Devil, the flesh, the self and the world. Pray for the FFI who, along with those four powerful enemies, have been on the receiving end of some rough treatment from within the Church Herself.

It will, I am sure, be well worth it.

Journalists: For the time being...

....if you want a Catholic answer, talk to the Chair.

If you want something else, talk to Pope Francis and Fr Lombardi.

What? You're really going to ask whether this Chair is more Catholic than the Pope? 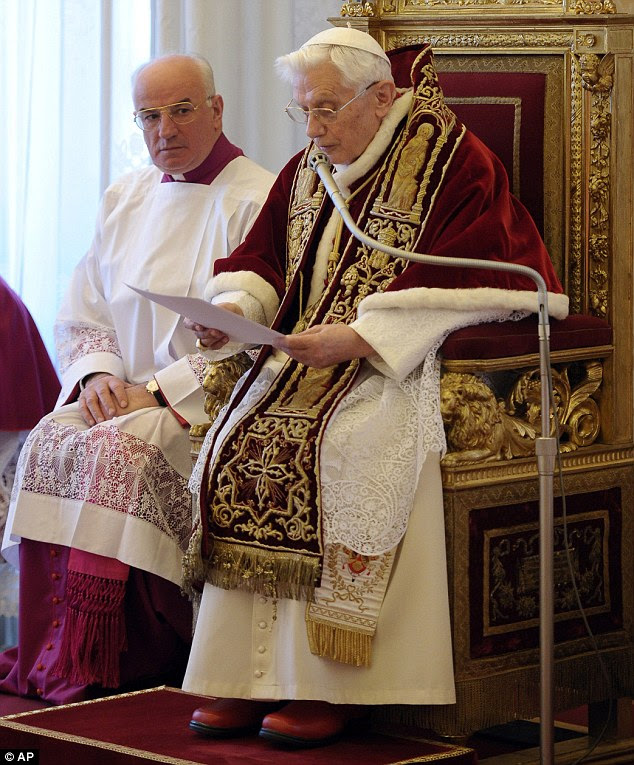 On this day, in 2013, Pope Benedict XVI stunned the Church and the World by resigning the active ministry of the Petrine Office, while remaining "in the service of prayer, so to speak, in the enclosure of St Peter".

Three years later, it has become abundantly clear that the man who assumed the vacant Chair left by Benedict XVI was and remains, an unswerving ideological opponent of the Pope Emeritus.

For those who think that such a description of Cardinal Jorge Bergoglio - who became who we now know as Pope Francis - to be unfair or unjust, or misleading, a relatively brief assessment of these three years which have quickly passed may be helpful.

Whatever history says of the still controversial resignation of Pope Benedict XVI, history itself is not the ultimate judge of a man. The judge of every man is Our Lord Jesus Christ, Whose Vicar on Earth, Benedict XVI was. I say 'was' because, like the vast majority of Catholics, I assume that this title now belongs to his Successor, Pope Francis.


On a macro-scale, the Catholic Church has been thrown into a crisis of perhaps hitherto unprecedented proportions. So much has changed, most notably, in the public image of the Pope and the Church. The man who Austen Ivereigh dubs, 'The Great Reformer', Pope Francis, has expended huge amounts of energy in cultivating an image of the Catholic Church which is astonishingly human, so human that it is not an exaggeration to argue that we could be forgiven for thinking that under the reforming Pope of our current times, the Catholic Church is experiencing, on a general scale, a cultural revolution of secularisation effected through an engineered collapse of the Church's fundamental tenets of belief. Quite simply, Pope Francis is, in terms of the message going out to the city and the world, for the Catholic Church, our 9/11. Whatever is knocked down can, however, be rebuilt.

And while it cannot be exaggerated just how very damaging this cultural revolution - effected from above, mostly, though not totally, through public relations - is, precisely because it comes from the summit of the Church, what Bishop Athanasius Schneider and Cardinal Raymond Burke have called a 'crisis' is, in my opinion, like Lent and Passiontide, only a prelude to, a preparation for, the birth-pangs of, something else entirely. For what we look forward to in Lent is not simply an ecclesiastical event but the Resurrection of Christ our Lord and ultimately, the Resurrection of the Dead, the Resurrection of the Church, the Bride of Christ.