With astounding ease, then, the elected representatives of the United Kingdom crossed the millennia-old threshold in human understanding of both marriage and human nature itself.

Generations ahead will look back upon yesterday's events and forget most, if not all of the names of the men and women who redefined an institution without which no society can be expected to flourish, but will they forgive them?

With the future of an entire country in the palm of their hand, the vast majority of MPs gazed into a future in which marriage and children were concepts forever to be severed, no longer to be joined and, seemingly without a second thought, not even a flinch, abandoned princples which served as the one source of stability to every civilization and every human family - including the one into which they were born and in which they themselves were nurtured.

In place of timeless values which have glued society together since time immemorial, our elected representatives erected a myth, a monstrous idol that they now wish all of society to adore and worship. They named this myth equality, since Governments who wish to steal power from its own citizens need to make their crimes sound like virtue in order to get away with it. While British people read of an MP and cabinet minister whose reputation lies in tatters over a lie concerning a speeding ticket, the House of Commons passed a bill that aims to enshrine into the law of the land an outright fabrication - an artificial creation - an atrocious lie. They will do this, seemingly, with total impunity and utter disregard for the opinions of hundreds of thousands, if not millions, of British people.

Make no mistake, however, Parliament is guilty of theft. Not content with having acted as agents for the stealing and looting of your savings and pensions, they have now taken your marriage as well. That is the esteem that they have for you. The 'Equality' myth marches on, a golden calf so worshipped by the political elite that even those who listened to warnings of the coming victims who stand in its path will be blind and deaf to the anguished cries of those who refuse to bow down and worship it, and, in doing so, stand to lose their jobs and livelihoods.

While this astonishing piece of legislation will do nothing for marriage, but weaken it and dilute it, it will, too, do nothing for the vast majority of people of the United Kingdom who stand to gain nothing from the legislation, but to see their own marriages be redefined forever, their once universally esteemed titles of husband and wife to be erased, eerily, from human history.

'Progressive' and 'modern' Britain is now so at ease with homosexuality that it has used the power of the State to redefine marriage in the law of the land so that homosexuals and lesbians may share in its benefits. Yet 'progressive' and 'modern' Britain is still as at ease as it ever was with the gross injustices that pervade the avenues of every city and town in the land. Many people must be at home, over these cold, winter nights, wondering just how it is that a Government that prizes 'equality' so much, has nothing to say to those who cannot afford to heat their homes. The cost of living, the price of food, continues to soar, but, to those people who cannot afford either, the Government has nothing to say. To those countless individuals who leave school unable to read, or to write, this Government has nothing to say.

We have, truly, entered into a new period of political history in which Government has nothing to say to its own people, other than to tell its own people what or how to think. This is now an age in which Government no longer sees itself as any kind of servant of its citizens, but master and Lord of all. The sexual equality movement is a glitzy, if powerfully emotive, sideshow - a spectacle, indeed - that fails, catastrophically, to meet the real needs and cater to the real rights of anyone - not even those in the LGBT community - who win no new rights under this legislation other than to have the meaning of a word destroyed forever for their sakes - to have a lie made into a truth by the power of the State.

It seems blatantly obvious that this legislation will require, for it to be accepted universally, enforcement of the law - a fact that bodes truly terribly for freedom of thought and speech. Enjoy blogging and reading blogs while you can, and enjoy sharing with others the Catholic vision of life, love and marriage while you can, for surely the close of yesterday's debate signals the first phase in the closing down of debate on this issue of homosexuality and the true nature of marriage for a long time to come. The State is no longer, if it ever was, an impartial judge in the culture war which ravages these isles. Indeed, the State now has its own religion and, like so many new religions divorced from Truth, it will be shown that this one has nothing of value to offer its adherents but a sorrowful cult of slavery which will inevitably brand as heretics its opponents, dismissing them, ridiculing them and deriding them until their humanity is forgotten and they are dismissed from public life.

Despite what the Government insists, marriage will always be a unique institution that exists between men and women for the procreation of children and for the common good of society. The 'same-sex marriage' legislation that will go before Her Majesty the Queen to be signed is no better on paper than a speeding fine paid for illegally by Chris Huhne's wife. It is a clever fraud, devoid of truth, a charade, a performance piece, like so much of what we see passing before Parliament today.

British people will continue to be savaged by debt. They will continue to be forced to take work for insulting wages while the cost of living soars. They will continue to have their natural and inalienable rights to shelter, food, water, heating, trampled upon by Government agencies and huge corporations at a local and national level. And this - this 'worthless piece of paper', this 'legal contract' that we assume must eventually go before Her Majesty for her Royal Assent far from bringing a new dawn of rights to British people, will serve to remove yet more fundamental rights of parents and children, as yet more power slips from the people, to the people in power.

If you are a British person bewildered by yesterday's tragic performance in the House of Commons, then take heart and be of good cheer. This land, if ever it did, no longer belongs to you or your ancestors. Accept that you live here in exile. Embrace the Faith of Christ. Cross the threshold of hope. A walk around your town will signal to you that the country you once knew is closing down, but every Catholic Church should tell you that the gates of Heaven remain open. For Heaven, not this land, is your true homeland. If you no longer believe that you belong or fit in here, it is most likely because you belong and fit in there.

The only regimes that have to enforce a political idea or ideology on citizens, as this will have to be enforced, are totalitarian regimes. True freedom consists of the service, worship and praise of God in time and for all Eternity. The only 'right' conferred upon you by the Government yesterday was the right to remain silent. MPs yesterday left their names at the foot of a long suicide note for a once great nation. But you did not sign it. Nor have you signed up to the new, global, moral order that it heralds. 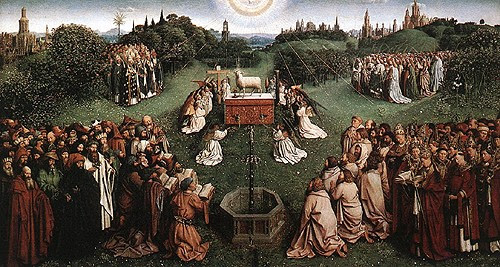 Yesterday marks the day in which Government crossed the threshold and breached its relationship of trust with its own citizens. It consisted of 'marital rape'. But, be brave, Britons, since no power on Earth can crush the human spirit nor stop you from crossing the threshold of true and lasting hope.

No, no power on Earth can crush the human spirit, not claim your soul, nor ever can any earthly Government hold you as precious in its sight as God hold you in His. The Wedding to which you are cordially invited it the Wedding Feast of the Lamb and who could be more trustworthy to carry you across the threshold than Our Lord Jesus Christ? Speak now, and continue to speak out in defense of marriage. From now, the Government will begin to insist that you 'hold your peace', but speak now and continue to speak up, since the One for Whom you stand and speak is none other than Our Lord Jesus Christ. Neither you, nor your marriage belongs to the Government. You and your marriage belong to Him. To Him be glory and honour and power now and for all ages.

Well said and God Bless you.

Beautiful post. I was so saddened when I heard the news last evening, here in Chicago. We are, all of us, living in perilous times. Today Britain, tomorrow the U.S. France already. But your words reminded me of the ultimate Truth and Hope. Thanks for that. God bless you.

A true, courageous, and inspiring post Laurence, thank you very much.