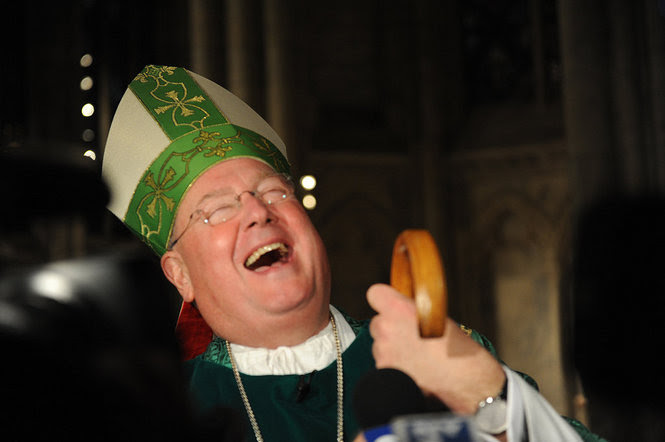 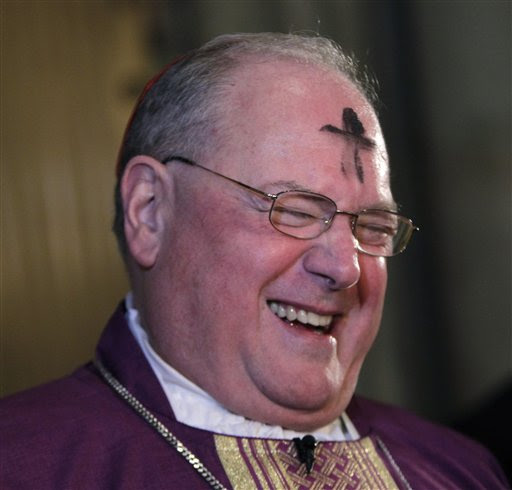 "I don't know whether the Church is ready for a Pope who laughs so much," said Cardinal Dolan, "I know I have to tone it down a bit especially when the occasion calls for it. I haven't been asked to do a Requiem Mass in years."
at March 10, 2013

Not sure whether you are pulling our legs with the last comment! Cardinal Dolan certainly seems to have a wonderful Irish sense of humour. I enjoyed his latest comment that he was ready to go home now as he had run out of socks!

He might want to reflect on what happened to the last pope but two,'the smiling pope'if I remember rightly.The conspiracy theorists are still working on that one.

Good grief. The Cardinal who invited, sat with, and yucked it up with the enemy of Roman Catholics everywhere at a public fundraising function. Then proceeded to explain his reasoning being that Jesus also sat with sinners. What? Jesus sat with sinners? Surely the Cardinal knows the other half of that statement, so I have no idea who he was attempting to fool, or placate. Perhaps the average uninformed Catholic that was raised on that pablum of Jesus was a nice guy and accepted everyone just as they are.

Cardinal Dolan will not be elected Pope (thank God) and he's embarrassed American Catholics with his lack of common sense and decorum by his media-seeking behavior in Rome.