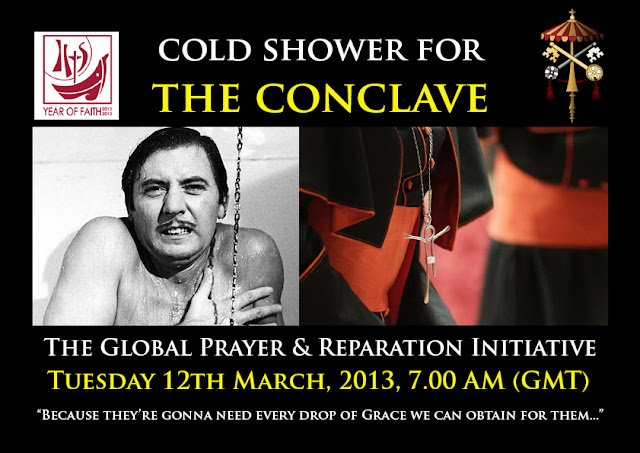 A group of traditional lay Catholics have launched a new prayer and reparation initiative for the Conclave to start in earnest on Tuesday 12th March. The initiative, 'Cold Shower for the Conclave' has been launched in response to some disturbing images in circulation on the internet as questions arise in terms of the orthodoxy of some of the Cardinals of the Catholic Church.

A spokesman for the lay Catholic group said, "I was quite hopeful that the Cardinals would be docile to the Holy Spirit at first, and then I saw the - what is it? - Cross type thingummyjig worn by one Cardinal-Elector as he gathered with other Cardinals in Rome for the Conclave. We therefore decided that some serious reparation was necessary and have called all Catholics across the World to take a cold shower for the Conclave at 7:00 am Greenwich Mean Time on Tuesday. We saw the Cross the Cardinal was wearing and developed the slogan, "Because they're gonna need every drop of Grace we can obtain for them."

The lay group spokesperson said, "Short of fasting and bombarding Heaven with our prayers, we felt something extra was needed. Join us in the cold shower prayer and reparation effort. We understand that cold showers are quite a shock to the system, so have not released a prayer. Instead, we urge those who join the Cold Shower for the Conclave initiative to issue short ejaculatory prayers such as, 'Holy Trinity, One God, have mercy on us!', 'Oh my Jesus! Help!', and 'Mary! Pray!'
at March 10, 2013

Can't promise a cold shower as don't have a shower in the house! But prayers are so needed to ensure we get a good, holy and orthodox Pope.

Cardinals were once bishops and reading today about a certain bishop on the Continent one does wonder if all the Cardinals are orthodox in their beliefs.

This particular bishop has been quoted as saying (or writing) that 'It is stupid and narrow minded to refuse access to women to the diaconate and the cardinalate.' He adds 'Imagine a dozen women cardinals in the conclave. It would change the face of the Church.'

It sure would! No wonder the laity are confused.