A planned witness to support marriage on Passion Sunday from 2pm to 5pm has been initiated by a group of French ex-patriates. Christian UK-based campaigning groups have been slow to organise anything, so the French, flushed with the success of the ‘manifestation’ in Paris in January, have decided to organise a demonstration in Trafalgar Square on Passion Sunday, 24th March, 2013.

What is little known is that this will be their second pro-marriage London witness. Canon Chris Sugden of Anglican Mainstream explains: ‘You may remember that in January around a million people - including many thousands of students and young people – demonstrated on the streets of Paris against their government’s proposals to redefine traditional marriage to include same sex couples. Hundreds of the demonstrators were UK-based French residents who boarded the Eurostar to Paris to join their compatriots. 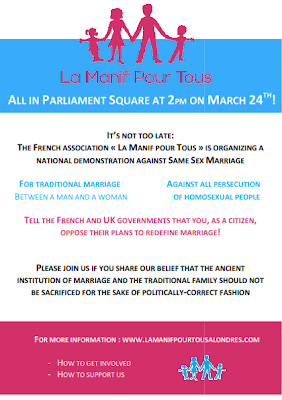 ‘What is less well known is that on the same day a further 600 French residents refrained from travelling to Paris but demonstrated instead outside the French Embassy in west London. ‘The UK-based protesters have invited other non-French UK residents to join them in Trafalgar Square, and to make this a joint protest against both the UK and the French governments’ plans to redefine marriage.

So...what are we waiting for? Got that? Here is is again in case you missed it...

French campaign group La Manif pour Tous is holding a demonstration in Trafalgar Square against same-sex ‘marriage’. These UK-based French marriage supporters are issuing an invitation to come and protest with them. The French Government, just like the British Government, is trying to push through same sex ‘marriage’ laws. This is a pan-European response to this pan-European challenge. It’s timed to take place simultaneously with a mass demonstration in Paris where 2 million people are expected to march along the Champs-Elysees!

You don't have to be French to attend this demonstration against same-sex marriage. Stand up and speak up now, or forever hold your peace. Spread the word.
at March 21, 2013

My son (who, unlike me, lives in London right now) took part in the first demonstration. He seems to have spent much of this week in handing out leaflets about Sunday's repeat event in London. Most people seem to have been very supportive, but there were a few who called him names.

Definitely will go. Thanks of the info.

Bon chance! Public demonstrations are vital in respect of outrages. People need to gain confidence in speaking out against tyrannical falsehood.

See you there, Bones!