Well, we are now well into the papacy of Pope Francis and its time to collect and present some of the wisdom of the Pope who we are promised will lead the Church through some pretty choppy waters, like a bridge over troubled waters. Yes its going to be just like the Simon and Garfunkel song.

So far, we've seen some quite extraordinary scenes in Rome and heard some things from Pope Francis that make listeners sit up and think. While the traditional Catholic blogosphere has had to learn to pray once more for the gift of holy patience with regard to Papal liturgical ceremony and shoe-wearing habits, there has been plenty for the Faithful to chew on in terms of food fed to us by the hand of Peter.

Take the recent homily from His Holiness on Confession, for instance, a homily that has apparently caused Hans Kung's statue of himself to miraculously weep salt tears at 3pm everyday without fail. If it continues, his entire statue will erode into nothingness. He'd invite the Faithful into his garden to admire his miraculous weeping statue of himself but, unfortunately, he's too busy plotting the overthrow of the Catholic Church for an umbrella one-world religion that compromises the Catholic Truth for worldly acceptance and masonic 'universal brotherhood'. Give it up, Hans, the gates of Hell shall never prevail!

So let's catch up with what our Holy Father has been saying: 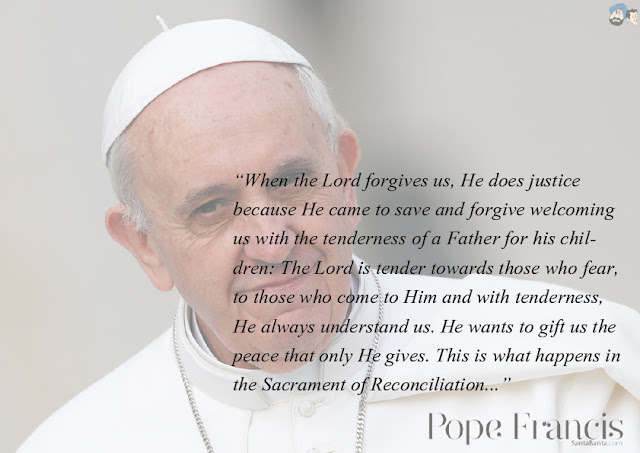 It is said to be at this exact moment that Hans Kung's statue of himself began weeping and that The Tablet's editorial team began to hyperventilate. A fridge in the office of the National Catholic Reporter in the US is also said to have exploded at the exact moment this was read. This follows something else the Holy Father said in his first Angelus: 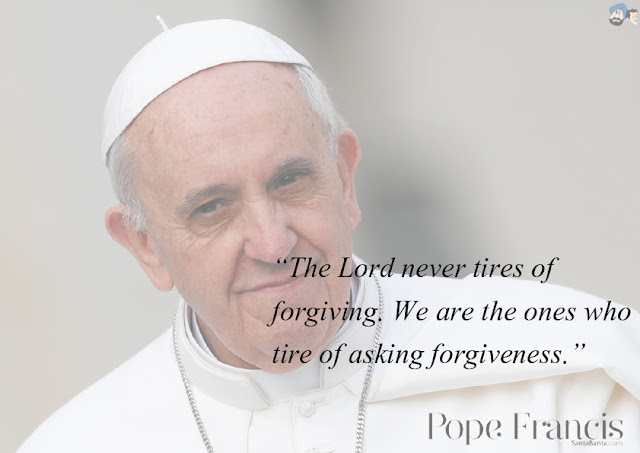 I'm beginning to notice a theme here, but wait, that's not all the Holy Father has been saying. Hang on, did he say what I think he just said? 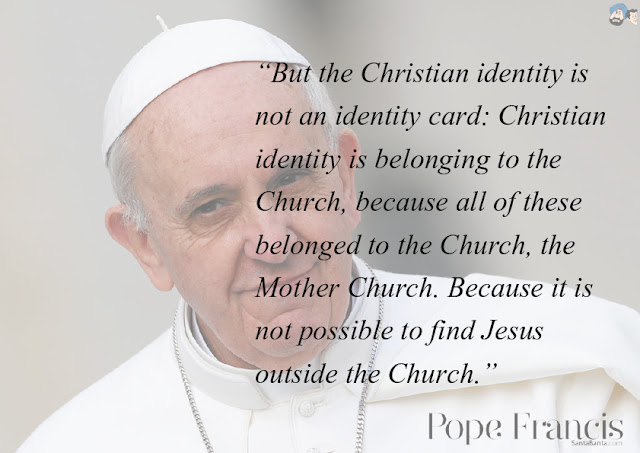 So, let's get this straight. Pope Francis has said, very publicly, that the Church is our Mother and that it is not possible to find Jesus outside of the Church. His Holiness has also said that we are sinners who need God's forgiveness on a very regular basis - the more regular - the better? Let's move on, shall we. 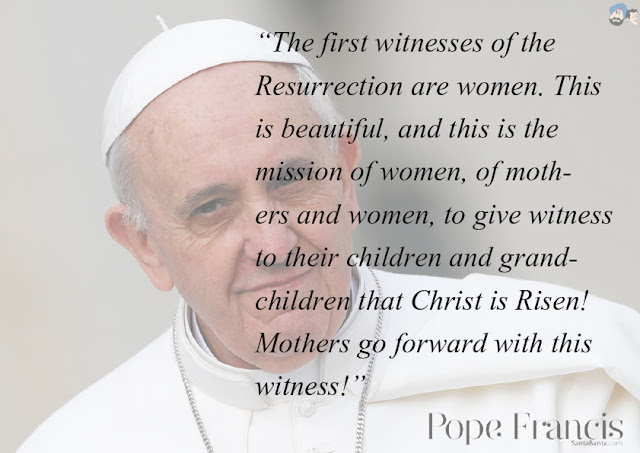 Did he just, like, associate women with motherhood and suggest that the fulfillment of womanhood is, for most, motherhood? Sisters, yes, I think that is what His Holiness said! Moving swiftly on, then! Then, to Priests, His Holiness said this: 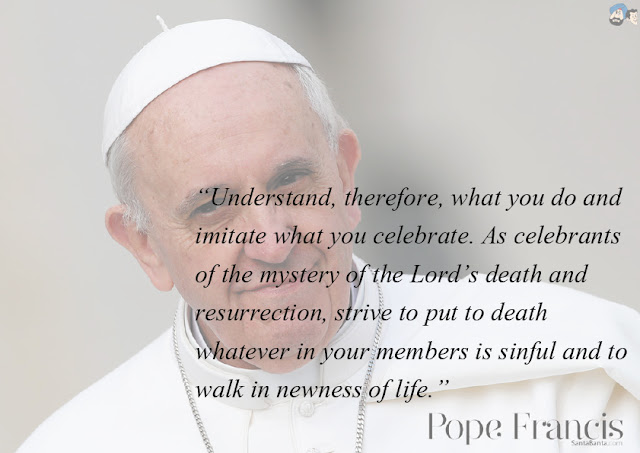 Did he just, like, tell Priests to stop living sinfully so that others may sinfully live and to live lives of holiness in imitation of Christ?! Yes, I believe he did! He also said this:

"You will exercise in Christ the office of sanctifying. For by your ministry the spiritual sacrifice of the faithful will be made perfect, being united to the sacrifice of Christ, which will be offered through your hands in an unbloody way on the altar, in union with the faithful, in the celebration of the sacraments."


Did he just, like, say that the Holy Mass is the sacrifice of Calvary on the Altar of the Living God!?

There are more wonderful things that our Holy Father has said, so let's end with a particularly upbeat message from the Catholic Pope defending Catholic teachings who is, by his words and his actions, striving to preach repentance for the forgiveness of sins to all mankind, in a simple and profound manner that should really have liberals quaking in their shoes.


Have they not realised yet?

"Remain steadfast in the journey of faith, with firm hope in the Lord. This is the secret of our journey! He gives us the courage to swim against the tide. Pay attention, my young friends: to go against the current; this is good for the heart, but we need courage to swim against the tide. Jesus gives us this courage! There are no difficulties, trials or misunderstandings to fear, provided we remain united to God as branches to the vine, provided we do not lose our friendship with him, provided we make ever more room for him in our lives. This is especially so whenever we feel poor, weak and sinful, because God grants strength to our weakness, riches to our poverty, conversion and forgiveness to our sinfulness. The Lord is so rich in mercy: every time, if we go to him, he forgives us. Let us trust in God’s work! With him we can do great things; he will give us the joy of being his disciples, his witnesses. Commit yourselves to great ideals, to the most important things. We Christians were not chosen by the Lord for little things; push onwards toward the highest principles. Stake your lives on noble ideals, my dear young people!" 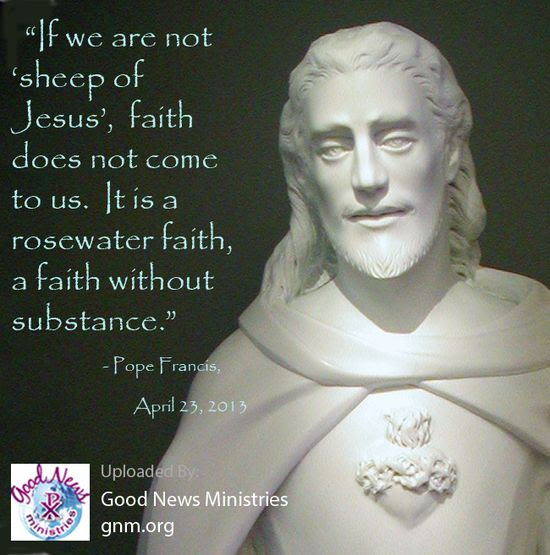 For my part, Pope Francis makes me more than a little nervous. He inspires me to ask the question, 'Lord, what is it that You want me to do?'
at April 30, 2013

If this is supposed to be a Traditional Catholic Blog than what is it with all of the continuing OMGs? Do you not realize that you are taking the Lord's name in vain which violates the Second Commandment of Almighty God? Certainly these statements of the Pope and BTW they are "off the cuff" remarks NOT parts of any official text he is reading from. Quit trying to appear "Hip" with all the OMGs

That's the problem with you trads, you're just so quick to jump to conclusions.

Thank the Lord Almighty that He forgives.

Why is it so bad that these statements were 'off the cuff' and not parts of any official text he is reading from?

Is it not good that it was 'from the heart'?

Can you see nothing good in our beloved Holy Father?


Thank you Laurence, for this informative and inspiring post.
I would not have been aware of the Holy Father's remarks if you had not published them. Thanks be to God, and thank you Pope Francis.

I'll be creating more quote boxes when more come in.

Pope Francis has something of the bluff Yorkshireman about him. The liberals will turn against him sooner or later. Maybe it will be when he puts his foot right in it and says something like "liberal Catholicism comes from the devil". I'd like to see Hans Kung/NCR/Tablet spin their way out of that one. I wouldn't put it past him either as he seems the blunt type and he likes his references to the devil