Compare and contrast the response to the death of Margaret Thatcher to the death of the 'father' of IVF, Sir Robert G. Edwards. Which one will be more influential in years to come? It is certainly in the balance.

Sir Robert is already been hailed as a hero, the jewel in the crown of assisted fertility, the Saint of the Royal Society, but his 'discovery' will, in time, be greatly rued by society, as will the monstrous 'Human Fertilisation and Embryology Authority,' created by the parliamentary Act of more or less the same name.

The momentum of the fertility and IVF industry is well on the road to eugenic insanity. It is the seed of IVF that will doubtless lead us to a society that will put the "genetic superiority" of some embryos ahead of the sanctity of human life.

Already, IVF procedure sees the industrial discarding and destruction of unwanted embryos (that is - nascent human life) and the preservation of embryonic human life in deep freezing. While the abortion industry and its supporters in the mainstream media try to 'hush up' the outrageous Gosnell case, media and the world of science is hailing that man that ushered in the dawning of our 'Brave New World'. Already, same-sex couples, among others are hiring out the wombs of women with whom they have no relation whatsoever in order to 'produce' a child that is 'theirs' while the maternal parent disappears into the background and leaves the child in an unnatural environment that was never prepared with the child's best interests at heart.

As Catholics, we believe that God supernaturalises human bonds and human relationships. So, the bond between man and woman is, in marriage, supernaturalised by Christ so that the 'two become one flesh'. Bread and wine is supernaturalised by God when at the moment of consecration, bread and wine become the Body and Blood of the Lord. Water, when blessed by the Priest becomes Holy Water. This water itself is the portal by which man is reborn by Baptism. God takes ordinary matter, ordinary natural bonds and supernaturalises them. How different this is to scientists, who take human life, human bonds, human relationships and denaturalise or unnaturalise them! When they try to play God, they take that which is natural and instead of raising it up to a higher plane, reduce it, desecrate it, destroy and diminish it with their arrogant usurping of the Creator's role in the transmission of human life!

The sole body that now lies in opposition to the designs of scientists who mistakenly believe they are better at being God than God is the Catholic Church. The Church has always had compassion for couples who find it difficult to conceive a child and has always had sympathy for those who suffer infertility. The Church has never, can never, and I would assert, will never, however, sanction the good results of IVF in terms of the arrival of a new baby because the means used to conceive it are wholly unnatural, against the natural laws instituted by God, offensive to Him in the usurping of His role in the natural means of human procreation and risk the terrifying prospects of creating an 'new breed' in society who, from the moment of their conception have been severed from all natural bonds of natural birth parents, not by accident, but by design!

You may think that the headline of this article is a little cruel and I, for one, rejoice in the death of no man, but the outpouring of bile and venom against the late Baroness Thatcher shows no mercy to a woman who did her best for the country according to her political convictions. If you want to see an image of menace and evil, look not to Margaret Thatcher but to the flag held by the Brighton teacher who organised the 'death party' in this city to celebrate the death of someone who, despite her many faults, held fast against communism.

It should be recalled that her political convictions, while I disagree with many of them, ran totally in opposition to the hard political left of the United Kingdom who, for years, remained oblivious to the suffering, torture and extraordinary death count of the Soviet Union and whose socialism saw evil only in the ideology of the right, but remained blind to the ruinious excesses of the hard left.

IVF, lauded by so many on both the political right and political left, is a much misunderstood evil or our times and while the arrival of another member of the human race is always a call to rejoicing, the means and methods that brings these 'wanted' babies here are as ripe for condemnation as the means and methods by which abortion dispatches the 'unwanted' out of existence. Like abortion, IVF is now an 'industry' of baby growing while abortion remains an 'industry' of baby destruction. Both place a value on human life, both are destructive of human life, while the destruction of human embryos discarded by the IVF industry is a story seldom told, never heard of and their dismissal from industrial storage is kept far away from the sight or sound of the mainstream mass media. The commodification of the human person is a sickness of our times and it cannot all be blamed on Thatcher. Famous 'fellows' of the Royal Society like Sir Robert G. Edwards have played their own role in the creation of a society that puts a price on human life and discards those lives deemed unwanted or unfit for human purpose.

To anyone who reads this who was born as a result of IVF, I say this: I am glad you are here. You are of infinite value to God. The Catholic Church and Her followers condemn IVF not because it does not yield positive results, but because human life is sacrificed quite deliberately along the way to those results. You have every right to be here, but so do all the embryos held in cold storage in the laboratories and clinics across this sick, misguided nation. We hold that your life is sacred and that all human life is sacred. It is not for sale! The moment that this nation sets down along a road that leads to the commodification of human life, from conception to death, instead of upholding the sanctity of human life, from conception to death, is the moment that humanity itself becomes a market place and human life is traded for money.

Every year that passes it becomes more apparent that IVF will degenerate our humanity and exploit it, not improve it. 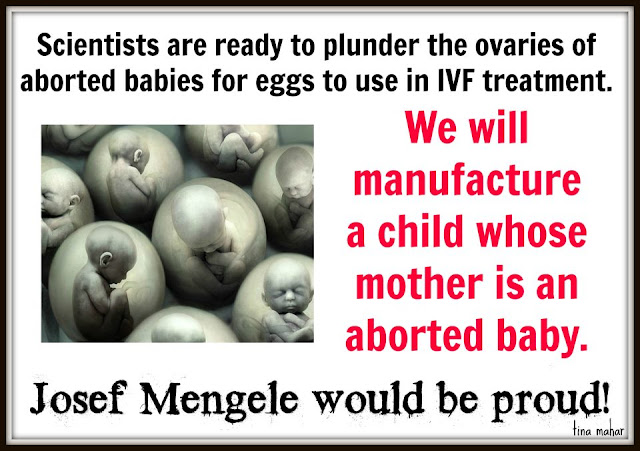 The father of IVF, may his soul rest in peace, opened up the door not just for the commodification of nascent human life, but for the deliberate and systematic re-engineering of the human race envisaged by such 'prophetic' authors as Aldous Huxley. Powerful forces at work at all levels of society desire that human reproduction pass from the hands of ordinary men and women to the State, just as human reproduction is in control of the State in such countries as China now. Powerful forces envisage China as the model for total State control of human reproduction in this country and across the West. We must never give up the fight against them. We must never again let tyranny prevail!

May all the souls of all the unborn babies and unwanted embryos
be among the first to greet you in Heaven!
at April 13, 2013

Thank you, Mr England. Of course, IVF is abhorrent in and of itself.