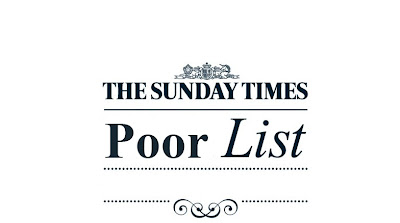 In a break with a 25-year tradition, The Sunday Times has announced that next year, as well as featuring the annual Rich List of the richest and most influential people in Britain (excluding the Rothschilds, who own everything, including your house, your fridge and your cat), The Sunday Times will bring to its readers the first ever Poor List - a list of the most uninfluential and deprived people in Britain today.

Martin Evans, acting editor of The Sunday Times, said, "With David Beckham being listed in the Rich List as being 'worth' £165 million (a snip if you consider his free kicks), we thought it was about time we showed readers that The Sunday Times has concern for matters of social justice."

We have some very interesting paupers listed ready for next year, including a man who lives on what he obtains from bins and a man who is imprisoned every time he walks on the wrong side of the road because of his ASBO. We also have a woman who raises fourteen children on a housing estate in Hackney while working 12 hour a day shifts as a cleaner in a petrol station. We thought that after all this time, it is important that we 'redress the balance' so to speak - especially in these times of Dickensian austerity."

Well done, The Sunday Times, well done. So important that people's 'net worth' is not measured in pounds, but in their unique dignity as human beings made in the image of God.
at April 28, 2013