In case you missed it, same-sex marriage legislation was passed in France. The protests against it were said to be small, token, sporadic and ill-attended. Another triumph for demoncracy in Europe. Some in France's Senate must look at that picture and think, 'Yeah...hmm...we're going to need a bigger guillotine.'

An important question to consider, though: Why did all these people join a protest in a battle they knew they couldn't win? I mean...it's like they've got beliefs or something! Weird! An interesting article from The Spectator here which is well worth a read. It suggests that the powers that be are, wait for it, a bit worried.

Meanwhile, France's new Ministry for Domestic Tyranny issued this image of what the department says is the true extent of the demonstration, which, as you can see, is nothing like the images circulated by the enemies of democracy, freedom and equal marriage. The Minister for Domestic Tyranny when asked the question, 'Did it snow that day?' refused to comment. 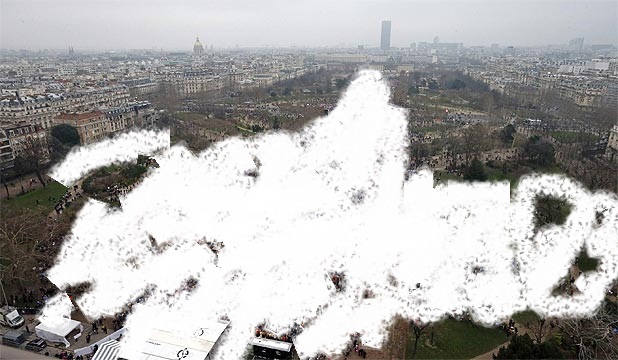 Meanwhile, in London, the Government are starting to become concerned at the level of public anger against same-sex marriage.

Already a protest has begun, as evidenced by the image below. Security has been stepped up a level and a spokesperson for No. 10 Downing Street has said that though the protest is surprising, it is expected that the Government will be able to 'manage the grave threat to public safety'. Still, however, 'all options, including the nuclear deterrent, remain on the table' when it comes to dealing with the protest. 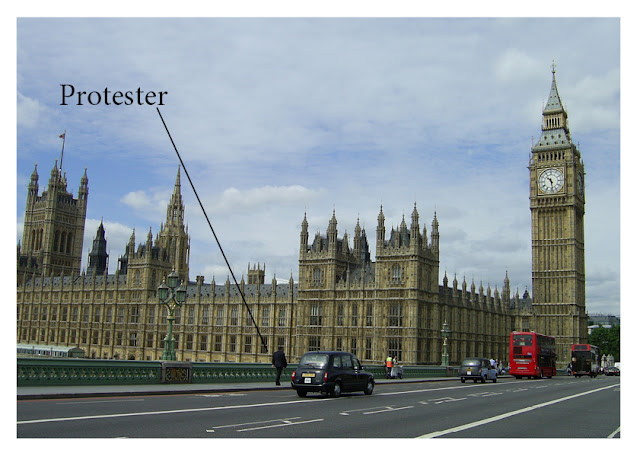 The Bishops Conference of England and Wales has released a statement calling upon the protest to cease, so that a cordial dialogue of mutual respect may be maintained between the Church and the State and, the man, who may or may not own a dog which may or may not be dangerous, has been urged not to worry and to 'write a stiff letter to your MP'.

In Heaven, there is said to be only one marriage, said to be that of the Bridegroom, Christ, with His Bride, the Church. Heaven is yet to do away with such terms as 'mother' and 'father' and still continues to insist that in terms of earthly marriage, one man and one woman is required. Heaven has gained increasing unpopularity among many activists on Earth by insisting that 'same-sex marriage' is a perversion in the order of a natural institution raised to a Sacrament by Christ in His Holy Church.

Meanwhile, noting the spread of same-sex marriage across the West, the Secretary of St Michael, Archangel, has issued this image from his heavenly department, the Department for Justice, Chastisement, Vengeance and Wrath with the following note,

'Yes, all the options remain on the table for Heaven also. If you read the story of Sodom and Gomorrah, well, it's not a story as such, but you'll see we had the nuclear deterrent long before you guys. Yes, we have a long-range capacity...' 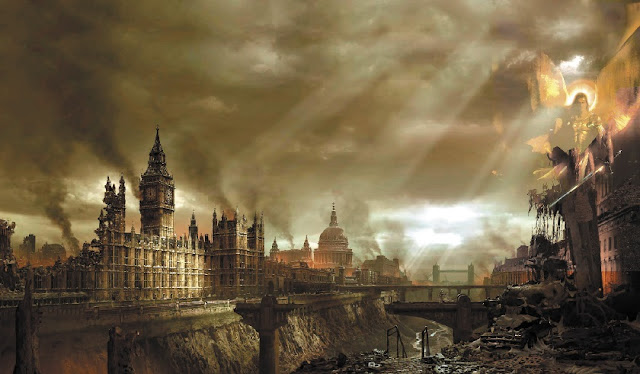 Now show us the other side of the story, the mile-long queues of same sex couples outside the registry offices in every city in Britain, waiting to get married.

1.5 million people marched not once but twice against the absurd legislation in France, as well as hundreds of thousands on other occasions. The picture is not indicative of the crowd as not all of the marchers were allowed into that area next to the Eiffel Tower.