The Only Problem with Capitalism is the Capitalists

I fail to see how a company that is as hugely profitable as Primark, which by now must be a 'global' brand, cannot build safe working conditions for its workers.

In an age in which conscience is dismissed as just an irritating 'voice' or 'noise', I guess it is only natural that companies like Primark would do very nicely out of countries like Bangladesh, where they can treat workers with contempt and offer them a teensie weensie bit more money than they would get working for someone else in the country.

Why do the Chief Executives of such firms as Primark, among the other high street names that employ people for peanuts in foreign lands to sell cheap stuff in the West, not consider their consciences? Is business and trade an arena in which conscience is not necessary? A burden?

A lot of independent small businesses in the UK are closing down in the recession. Companies like Primark are still opening stores across the land. Like a good many high street chains, Primark's profits are presumably pretty healthy now, though I understand that 'enough is never enough' nowadays.

Thanks be to God that even in the rubble that exposes Primark's Chief's infernal avarice, a baby has been born - something that is being hailed as nothing short of 'miraculous'. It might raise the question, 'Why is someone so heavily pregnant working in a factory?' but not to Primark, I guess. Does she get 'maternity pay'?

People naturally look at calamities like this and think that the State must do something. God forbid anyone in Primark should examine their consciences and see that maybe, just maybe, putting profits ahead of people - even your workers - is incredibly sinful. The world needs Jesus Christ. Yes, even the world of business needs Jesus Christ.

And yes, I know I'm a hypocrite. Yes, yes, I am wearing Primark pants. I know, I know. Shall I burn them on YouTube in protest? Come on people. Go commando for Christ! I can see a new Bishops Conference campaign in the offing there... 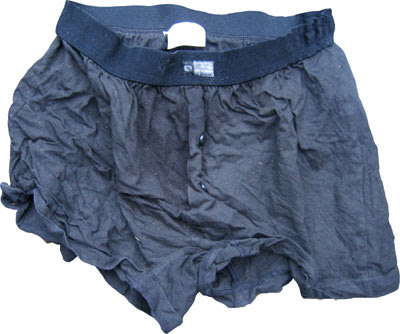 Seriously though, there is no reason why multinational companies and hugely successful global brands cannot be good or loving. People are not commodities much as the industrialists have told us we are. People are not there to be exploited. The world of business and trade is not there solely make huge profits, but to be put at the service of people as well.

It is not rocket science to suggest that businessmen need to conduct themselves according to conscience, but the whole conscience thing in generally unpopular nowadays isn't it? I mean, that whole 'Fairtrade' thing. Wouldn't it be better if multinationals just cut corners a bit less, treated their workers with dignity and obeyed natural justice?

Oh but if multinational companies did that economies wouldn't be 'competitive'. Conscience isn't part of 'our culture'. Oh right! Well then, just carry on as you are! As long as economies are 'competitive' that's the main thing. Is there no aspect of human life that has not been overwhelmed by social darwinism?
at April 27, 2013

This is not capitalism, it is corporatism where huge multinationals act like the aristocracies of old and lobby the various governments into passing laws that favour them.

Second, increased regulatory requirements, which there has been a deluge off in all areas of life. This favours large multinationals as they can afford the compliance processes and tests and small businesses cannot.