Rome Wasn't Built in a Day

Bill Maher points to the Vatican to his audience in his new film 'Religulous' and asks, "Does that building look like anything Jesus Christ had in mind?"

Lord, no! Of course, the Lord, the Word made flesh, born in a stable and raised by a carpenter, would never wish to be associated with anything that might suggest that God had visited this Earth and dwelt for 33 years as one of its inhabitants! No. If there is one thing God wants to be, having wrought for us our redemption, it is for His Pope and Apostles to live as anonymously as possible in the World, so that few would hear His message.

In order to communicate that God had indeed seen fit to become incarnate of the Virgin Mary, to live and die for us, wouldn't it be better if His Pope and Apostles had simply established a headquarters in a studio flat on a housing estate in Hackney? Or maybe, given that the Lord Jesus spent His ministry on Earth dependent on the generosity of others, taking for Himself no permanent addresses, that the Pope and Bishops and all clergy be homeless men begging from town to town from His first coming to His second?

Bill asks Fr Reginald Foster, who takes time out from his busy priestly schedule to pretty much agree with everything Bill Maher has to say. To me, that's the most worrying aspect of this short excerpt in which Maher does his level best to ridicule religion and faith. Fr Foster seems to think that the more that he trounces his own religion, the more popular will his religion be.

Back to the Vatican, though. Does that building look like anything Jesus Christ had in mind? Well, its there, so most definitely Jesus Christ, knowing all things, clearly had it in mind. In order to fully appreciate the glory of the Vatican and Rome as the 'HQ' of the Holy Catholic Church, you have to bear in mind the humble beginnings of the Church. The humble beginnings of the Church start with humility itself, or Humility and Wisdom Himself, Our Lord Jesus Christ, along with Humility and Wisdom herself, the Blessed Virgin Mary, Mother and Queen of Heaven and Earth.

God made Creation, so we say 'out of nothing'. Rome was not built in a day, but it is built out of next to nothing - a small band of Christ's followers, the Apostles, empowered by Pentecost, go out into Jerusalem to announce the Resurrection of Christ to all. From here, St Peter and St Paul go, leave to be missionaries of this good news to the ends of the earth and end up in Rome. In Rome, under pagan beliefs and superstitions, Christians pay the ultimate price for bearing witness to the Truth that God had come into this World and refused to bow down to the false gods of Rome, or pay homage to the Emperor as some kind of demi-god on Earth. 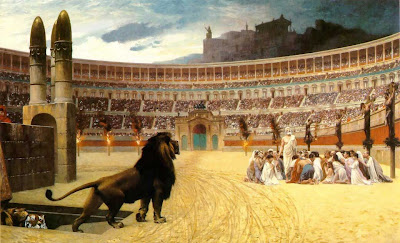 The Martyrs of Rome are slaughtered, burned, fed to lions, decapitated, crucified. You would think, would you not, that the might unleashed by Nero on the Church would crush it and end the mission to evangelise the nations? Did it? Incredibly, no it did not. The blood spilt by these martyrs produces more converts to the Catholic religion. Emperors come in time, emperors go, but the early Church continues amid horrific persecution that waxes and wanes in intensity through the first four centuries of its time on Earth. Then, the unthinkable happens. Constantine, the Roman Emperor, inheriting a line of Emperors who have persecuted the Church pretty much relentlessly has a dream in which God tells him that under the banner of the Cross, his armies will be victorious in a war. His armies, henceforth, are victorious and Constantine allows the building of Churches and Christianity is legalised in Rome. From here on in, it is just a matter of time before Rome is adopted as the city from which the Church is governed and what was once a place of bloodshed for Christians becomes the Eternal City in which humble witness to Christ triumphs over all the might of earthly Kings who sought the religion's eradication.
The glory of Rome is not just what it is now. It is what it is now, in comparison to what it was, which was, namely, a bloodbath of Christian lambs to the slaughterhouse of pagan worship. It is what it is now compared to what it was not or would never be but for the men and women who laid down their lives for the truth. The might of four centuries of pagan emperors could not stop the power of the Resurrection! It is what it is now against all the odds that makes it what it truly is. Really, this is the only adequate response to the presence of incredible works of Church architecture that you see in the World. Awe. Awe is what the buildings of the Vatican, St John Lateran and St Peter's Church inspire. How did all this come about? One man died an ignominious death on a Cross and the result is this! His followers followed Him to ignominious deaths and the result is this? How can this be?

Rome is evidence not that Jesus Christ and His followers enjoy showing off. It is not vanity or anything like it. It is evidence that God uses the weak things of this World, so often despise and rejected, to show forth His Divine Power. The Vatican, with all its splendour and wealth, is testament that God gives victory to His faithful even though it seems as if there is no way victory could possibly be achieved. All that is needed is a little time and the willingness of His followers to bear witness to the Truth even when the machinery of the State tells you it will cost you your life.

"Does that building look like anything Jesus Christ had in mind?"

Yes, indeed it does. There is no doubt about that. There is, of course, some Church architecture that begs the question... 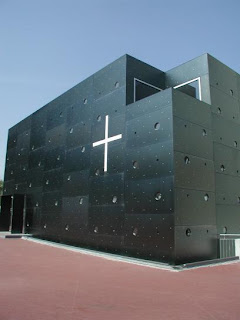 Does that building look like anything Jesus Christ had in mind? Answer: No.
at October 03, 2012

You have given a brilliant answer to the question occasionally posed on the wealth of the Church. Wish I could have answered so well when I was last asked this question.

Sad to see such an eminent Priest be so flippant about beliefs. So Hell no longer exists? All in the past? I remember reading that he was seriously ill a few years ago so perhaps this has affected him. Googling around one person said that he was a 'complex' character.

Very sad to read the Priest's comment on the Tridentine Mass. He is quoted as saying 'It is a useless Mass and the whole mentality is stupid.' Are we really heading for division into two Churches both of which say they are Catholic?

This is indeed a brilliant article which gives me much food for thought. I have problems with the conspicuous display of wealth by the Church, and finding the right balance between glorifying Almighty God with material riches, and following the humble carpenter. There is the example of Christ Himself, His admiration for John the Baptist, and yet the contrast with His approval of Mary Magdalen`s extravagance. I will go on thinking about it. Thank you.

On the subject of St Peter's Basilica an anti-EU protester has climbed up the outside of the dome there. I wonder how he got past security with his banner. He must have a head for heights.

Why does my entry have a little symbol for "delete comment" ? I am mystified!

All comments seem to have this little bin now. weird!

Off topic - It's so damned good to see you posting on the DT blogs again. Please keep it up. We need your Catholic voice out there in the secular press. I know you must be very busy with your life but PLEASE consider more frequent posting there on the issues that are of concern to you. You know what you're talking about and are articulate in presenting it; the world needs to hear Catholic apologists such as yourself presenting the Truth to people who are in desperate need of hearing it (whether they know it or not).

That priest ought to be taken out of ministry in the Catholic Church immediately.

This priest is very worrying, He reminds me very much of that generation, ashamed of his religion, covering his clericals, trying to cosy up with the secular world, Thats not going to convince anyone, or lead to any conversions, or changes of heart, We need priests who's faith is everything, who are willing to defend it and look stupid on a documentary, who are willing to die for it. Like the early Christians you mention in this article, like the English and Welsh Matyrs. Until then Catholicism will continue to be mocked, misunderstood, and rejected by the modern world. Let us prayer for priests that they may be strong in their faith and not scared to be beacons of light in this world of darkness